Meet the Leaders of a New School of San Antonio Drag 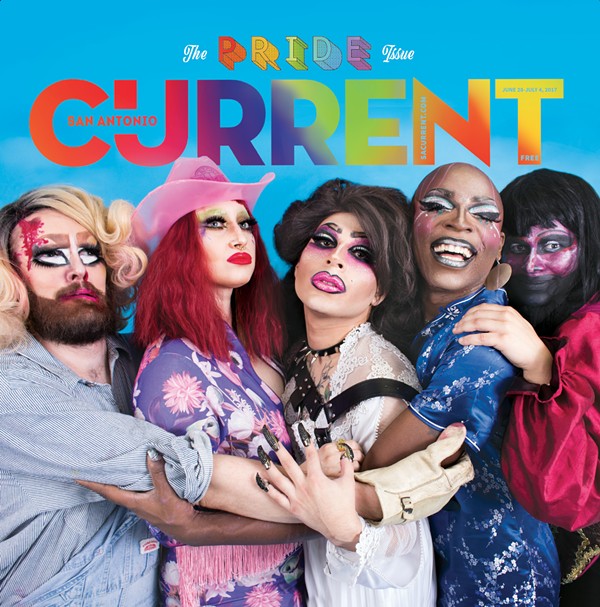 From the male actors donning wigs and dresses at the Globe Theatre in London in the 1600s to the Kabuki performers of Japan later in the same century, men dressing as women (and vice versa) has existed long before the world of RuPaul and RuPaul’s Drag Race.

However, it’s hard not to mention RuPaul or the Emmy-winning show when discussing drag queens and drag culture. In 1996, RuPaul Andre Charles took the once-underground gay-club genre of performance art to the living rooms of Middle America with the VH1 series The RuPaul Show, where she would interview guests like Nirvana and Diana Ross. And in 2009, the performer launched the show RuPaul’s Drag Race, in which (if you didn’t already know) drag queens from all corners of the United States compete against each other in a Project Runway-meets-America’s Next Top Model-type showdown.

Today, drag has exploded across the Earth, leaving a trail of lashes, nails, wigs and makeup palettes in its fabulous wake. From pageantry drag queens like the late local legend Erica Andrews, drag daughter of the illustrious Tandi Andrews, to the backyard dance routines of Brazilian YouTube star Saullo Berck, who slays Beyoncé routines in a pair of platform shoes made out of stacked concrete bricks, drag today isn’t just a sideshow act doomed to rot in dingy gay bars in the “queer” corners of town. It’s an artistic form of entertainment that has continued to unite members of the LGBTQIA community while celebrating gender fluidity, diversity and an opportunity to unsubscribe from the gender binary.

We caught up with five San Antonio drag performers who have ventured off the beaten path of straightforward pageantry drag (something that has always been a sort of standard here in San Antonio) to create a community that welcomes drag queens who choose to express themselves with avant-garde, spooky and downright weird costumes and themes.

The drag community has existed for a long time in San Antonio. From the outpouring of queens eager to grab a title at Talent Night at the old Paper Moon in the 1980s to the Haus of Andrews Pageant hosted by the late Erica Andrews and today’s Drag Me to Fame competition hosted by Rey Lopez (who routinely brings RuPaul’s Drag Race stars to San Antonio), drag has continued to draw in the next generation of South Texas queens willing to tuck and roll their way across a stage.

Among the queens to emerge from this scene is Miss Taint, born Brian Hernandez, who secured monthly titles at Drag Me To Fame in 2015 and in 2016. For those unaware: Drag Me to Fame is a weekly competition where fans vote for their favorite drag performer and, at the end of the month, a final winner is selected and is then given a chance to open for a Drag Race queen. Once a year, all the monthly winners are pitted against each other for a chance to be crowned an official Rey Lopez Entertainment Showgirl.

Though Hernandez didn’t win the yearly competitions, the experience allowed him to start hosting a few freak shows at the Heat, which featured Hentaii from San Marcos, Sephwhora before she became a Junior, and Amerie Parker. After not really feeling accepted on the Main Strip, Hernandez took a hiatus from hosting shows and in February started Slay Queen, a drag production at the Thirsty Camel that has since become a hub for drag performers whose aesthetic ventures outside the bubble of the traditional drag.

“I’m a creature of the night — but, like, the most glamorous creature of the night you’ve ever seen,” Hernandez told the Current, explaining that his drag combines elements of the glitz and shimmer of pageantry drag with the dark elements of horror-themed costumes. Rumor has it Hernandez once held a cow heart above him during a performance, letting the blood run down his arms for dramatic effect (now that’s dedication).

But it hasn’t all been blood and glitter for Hernandez. In the summer of 2014, he was diagnosed with HIV, which ultimately led to him withdrawing from Texas State University, where he was working toward a BFA in performance and production. Hernandez eventually moved back home to San Antonio to be closer to a community that could support him.

“Slowly but surely I started getting out of my shell … all of the hurt … everything I was feeling, I threw into my drag,” Hernandez said. He wanted his makeup, costumes and performances to reflect all the pain he was going through.

While allowing himself to process a life-changing diagnosis through art, Miss Taint has played a pivotal role in pushing the boundaries of what drag is “supposed” to look like here, and has helped other local drag performers explore the creative borders of drag in the process.

On February 25, Chyna Doll Dupree, a trans drag performer who had toured all over the country, was shot and killed in New Orleans, where she was celebrating Mardi Gras with her family.

According to Ernell Marshall, who performs in San Antonio as Ezzz Brezzz (pronounced “easy breezy”), the two of them were actually slated to perform that night at Oz, a popular Bourbon Street gay bar. Marshall still took the stage that night, and has kept performing since — albeit with a little more awareness of his surroundings when out in public in drag.

“I feel safe, but it’s just about how you present yourself,” Marshall said. He says he learned a lesson that night, and implored other queens to take care of themselves and always be aware of their surroundings. If you pick up on negative or dangerous vibes, he says, just leave.

Marshall names America’s Got Talent and Drag Race queen Kennedy Davenport as a big influence, and describes his personal drag style as “ethnic fierce,” combining leotards, cat suits, and miscellaneous dance wear that compliments his body. “I’m a bucking drag queen … there are drag queens that just sit there and look pretty, and there are drag queens that buck” — meaning that his performances are extremely high-energy and are punctuated with kicks, spins, jumps and boisterous dance moves.

Marshall says he hopes to start a community center for drag queens and audition for RuPaul’s Drag Race one day, all the while pushing the ferocity of Ezzz Brezzz to the next level.