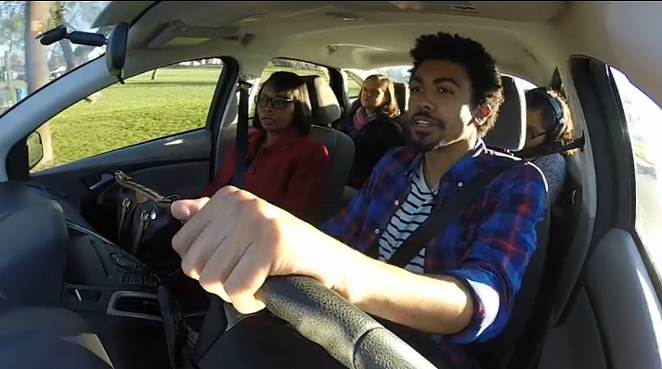 Have you heard? is back in business in San Antonio. And to mark the occasion, Mayor Ivy Taylor herself took a ride this morning from her East Side home to City Hall.

Tyler Moffett-Matheson drove her there in his 2014 Ford Focus. Moffett-Matheson is a 22-year-old Canada native who's a marketing major at UTSA. Taylor was Moffett-Matheson's first customer as a Lyft driver. The San Antonio Current caught up with him to ask about the ride.

San Antonio Current: When did you find out you'd be driving the mayor?

Tyler pretty much handled it all. The higher-ups referred me over to [City of San Antonio] public relations as somebody that could potentially do it. They reached out to me and asked if I'd be interested in driving either the mayor or some other elected official. I said 'Yeah, that'd be a great opportunity. I'd be down.' I didn't know it would be the mayor until last night.

SAC: Were you nervous?

TMM: Yesterday I was nervous. But I woke up today ... and the whole time I wasn't nervous. I was excited, I was pumped. Once she got into the car it wasn't that I was nervous ... I didn't talk a ton, but I was letting her lead the conversation.

SAC: Do you think you swayed her to pick Lyft instead of Uber?

TMM: I think so. But I think she already, going into it, she had an affinity for Lyft. ... As far as feedback, what I got from her was definitely successful.


SAC: You picked her up at her home — do you get over to the East Side a lot?

not too much. But that's another great perk of doing rideshare — as a driver it helps you learn parts of the city you don't normally go to.

SAC: Did you have to tidy up your car before you picked her up?

try to keep it pretty tidy. I have friends in the car and what not, and it needs to be cleaned somewhat regularly. ... More so I just took it to the car wash. I did the good one rather than the minimum one. Made sure to vacuum out tom ake sure the dirt and leaves were out.

SAC: Were you worried about car trouble?

this being a fairly new vehicle, it shouldn't really have any technical difficulties. I'm not a bad driver, I don't push it too hard or drive crazy. The only thing was the navigating — I pretty much had the time. ... It's hard to be completely relaxed, but nothing really went bad, so it was all smooth sailing.