Melodic Metal Mayhem at the Aztec 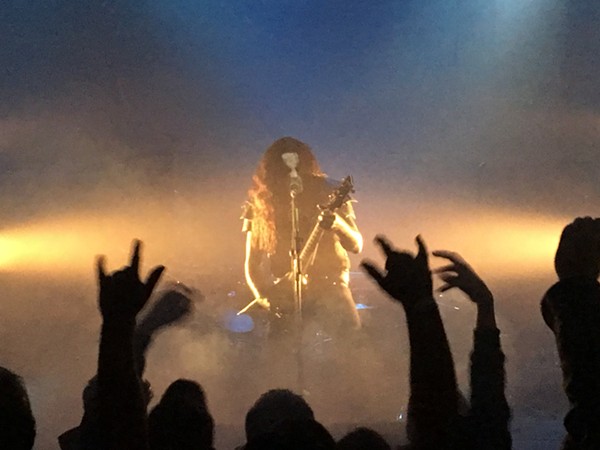 “Hey, my friend and I forgot our IDs do you think if we gave you money you could buy us some drinks?” some rando teenager asked me after the closing of Oni’s set, the prog/djent metal band from Canada opening for Children of Bodom. I apologized, said I couldn’t even though I kinda wanted to be like, the cool older brother figure, but I also didn’t wanna get arrested for providing drinks to minors.

I’m officially an old guy at the metal show but, fuck it, the line-up is pretty sick and these sober teens aren’t too terrible.

The crowd at the Aztec Saturday night was pretty mixed, which makes sense for the bands on tour – however, the standard black band T-shirt or hoodie remained essential dress code. After Oni (named after the malevolent shapeshifting Japanese demon), the Los Angeles quartet Exmortus took the stage. Donning long black hair and tight jeans, Exmortus hair-whipped their way through a quick 30 minute set of '80s inspired thrash and bits of Norwegian death metal. “You guys okay if we play some classical music?” singer Jadran “Conan” Gonzales asked before Exmortus shredded through their closing song, a death metal cover of “Moonlight Sonata (Act 3)” by Beethoven.

Up next was Abbath. If you know anything about black metal, you’d know that frontman/guitar player Abbath Doom Occulta was a founder and the frontman/bassist for Immortal, one of the bigger black metal bands to come out of Norway. Leaving Immortal last year and starting his own band (named after himself), Abbath jumped on tour with Children of Bodom in support of their album named, you guessed it, Abbath. Rapid double bass kicks and strobing lights baptized the crowd as Abbath’s familiar growl cut through a wall of distortion for a solid 45 minutes of classic black metal.

Following Abbath were tour headliners Children Of Bodom, a multi-genre’d metal band hailing from Espoo, Finland. Throughout COB’s set, their many inspirations became manifest – everything from American thrash, to Scandinavian black metal and new school death metal. Mosh pits erupted in front of the stage as singer/lead guitarist Alexi Laiho and company swung the crowd through an hour and a half of melodic mayhem, an apparent reminder that despite the rise of indie pop bullshit, metal is still alive and revered in the hearts of many in San Antonio.