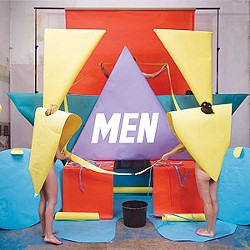 
MEN talk about more than the body, as their debut offering runs the gamut of socio-political commentary, from economics to war to sexuality, but their provocative lyrical demeanor blends well with artsy funk, punk, and electro dance rhythms. The band is composed of a piquant mixture: half feminist electro Le Tigre and half psychedelic Hirsute, and the sound does not stray far from the art/performance rock of the former. “Off Our Backs” is a tumultuous ’90s dance tune addressing sexual attitudes. “Boom Boom Boom” builds on playful dance beats while addressing a wartime economy: “Half the boys are building cars/half the boys a war away.” “Rip Off” is an ironic dialogue in which the band basically writes its own album review: “Half spoken, half sung/where the vocals in most of the songs/repeating simple phrases/creating a hypnotic monotony.” The song also pokes fun at the fanatical music media, as lead singer JD Samson chants, “Aren’t you at the center of the world?” after replacing “aren’t you” with “orange juice” and “our truth” earlier in the song. Talk About Body does more than talk — it roars with attitude while getting down.