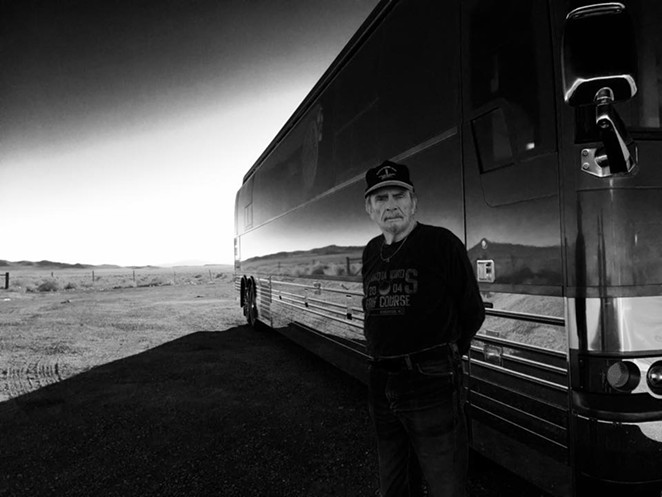 Merle Ronald Haggard, the "poet of the common man," the bard from behind bars, the velvet-voiced country legend from Bakersfield, California died at 9:20 a.m. on Wednesday, April 6, his 79th birthday.

Haggard, who has been suffering from pneumonia and double pneumonia for the better part of a year, recently canceled his string of tour dates with Willie Nelson, which would have brought the writer of classic country hits "Mama Tried," "Sing Me Back Home," "Okie From Muskogee," "Workin' Man Blues" and "I'm a Lonesome Fugitive" to the WhiteWater Amphitheater in New Braunfels.

Below is the tweet from Nashville's WSM-650 reporter, Jimmy Carter, announcing his passing.

In a recent interview with Rolling Stone, Haggard described the illness that he recently came down with and for a short time seemed to recover from:

"I had a double case of pneumonia about the size of grapefruit on each side ... I had a pain that went all the way around from my belly button all the way around to my back. I asked the doctor, 'What was that pain?' He said, 'It was death.'"

Haggard was somewhat of an anomaly in the country music genre. He sang of prison and had great sympathy for those "on the wrong side of the law," having spent his formative years in and out of institutions, including a bid in San Quentin, where he witnessed Johnny Cash perform, a concert that inspired him to get out and work on his passion, his music.

To say there will never be another like The Hag would be a great understatement. His championing of country-blues, hobos, trains, jazz, working folks, criminals and his disdain for "politicians talking out of both sides of their mouth" and other well-to-do ne'er-do-wells and his ability to sing of the peoples' woes and worries, with a voice so rich and words so poignant it could make a grown man cry like a babe, will live on in the music he left behind.