Merry Christmas Law is Gift that Keeps on Giving, Comedy-wise 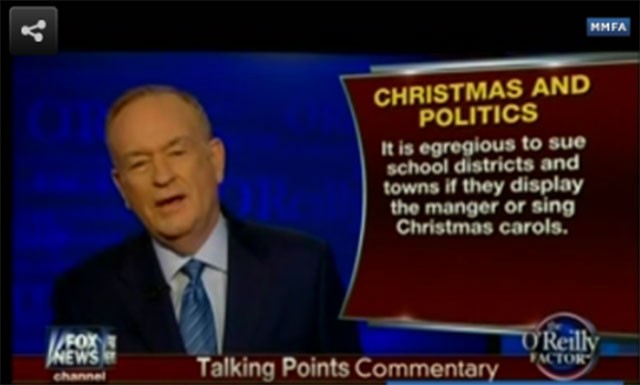 It’s that time of year again. Hanging stockings, decking the halls, caroling and, if you’re a Texas right-wing conservative, spending the hours needlessly fighting a religious war that doesn’t exist.

Thanks to legislation authored by state Rep. Dwayne Bohac (R-Houston) during the 2013 session, conservative groups are in a media blitz promoting the new “Merry Christmas Law,” which allows parents, teachers and students to celebrate Christmas and Hanukkah in public schools, “without fear of censorship, litigation or persecution.” (So, why wouldn’t you name it the “Religious-Inclusive Holiday Law” you ask? We could take a few guesses.)

“Our school officials and teachers have enough on their plate without having to worry about frivolous lawsuits for acknowledging Christmas in our public schools,” said Bohac in a release. “This bill simply offers protection for and guidance to school officials and teachers by codifying Supreme Court precedent and providing ‘bright lines.’ This bill ultimately is about bringing ‘fun, joy and magic’ back into our schools during the holiday season.”

In what feels like a now time-honored tradition, conservative groups—led by Texas Values, which runs a statewide campaign to protect the holiday in schools—have begun to launch their counterattack on the “War on Christmas,” and it appears the new law is their latest weapon.

Not surprisingly, some of SA’s most conservative elected officials are drinking the eggnog. State Sen. Donna Campbell (R-New Braunfels)—a co-sponsor of the law—promises to “stand up for the true meaning of CHRISTmas [emphasis hers] and stay strong for our conservative values in the Texas Senate,” on her Facebook profile and even offers up a dedicated page on her re-election website for monetary donations to “Stop the War on Christmas!” North San Antonio’s Texas State Board of Education representative Ken Mercer joined Bohac and others at public appearances to draw attention to the new law. There is a “culture war being waged on Christmas and Hanukkah,” said Mercer during an an event at the Capitol in early December. “The bad news: We had to pass a law to tell the far left that in a place called Texas, we believe in a document called the United States Constitution that protects our First Amendment rights!”

Perhaps without realizing it, Mercer signaled one of the central redundancies of the law—guarantees in the First Amendment already protect students, teachers and whoever else from religous expression and free speech.

“There is no prohibition in the Constitution or the law against a student or teacher wishing someone Merry Christmas—we didn’t need a law to protect it, we have a First Amendment to do that,” Dan Quinn with statehouse watchdog group the Texas Freedom Network tells the Current.

So what’s the end game for these freedom-loving, festive conservative players?

Case in point: $150,000 needed by December 31 to defend “your faith, family, and freedom” according to Texas Values’ homepage. (Amidst the Christmas Law hoopla, the group managed to wrangle in SA to their cause to help boost donation dollars—a message on the same page asks Texans to help protect freedom in the face of San Antonio’s “unprecedented attack” on Christians via our recently passed LGBT non-discrimination ordinance.)

“It’s ludicrous to imagine there is a war on Christmas in a country in which the vast majority of the people openly celebrate Christmas, but that’s what they’ve been trying to do for a long time,” says Quinn of the religious right.

But, wait a minute, how about those pretty ridiculous stories about school districts restricting winter holiday celebrations? After all, Bohac claims his son Reagan inspired the bill after being discouraged from referencing “Christmas” in school.

Quinn doesn’t discredit these isolated instances of censorship, but rather argues they are plenty of examples in which public schools have overstepped the boundaries in reverse—by unconstitutionally injecting religion into education. He points to a sex ed class in one district that suggests students can prevent STDs by making sure they don’t date non-Christians, and Bible courses that amount to “Sunday school devotional classes.”

Nonetheless, says Quinn, both sets of examples are isolated events and in neither case would the law be necessary. “Those kind of things are going to happen because human beings make mistakes, not because there’s some sort of nefarious campaign out there to crush Christmas or wipe it off the face of this Earth,” according to Quinn.

In the case of the most recent and publicly touted instance by the Christmas culture warriors, the claim was about as a real as a Dickens novel. The uproar from Texas Values over a notice sent out by the PTA of a Dallas-area elementary school banning “Christmas or any other religious holiday” and “red/green or Christmas trees,” helped give relevance to their campaign. But the ISD says that’s not what went down. In fact, the e-mail referenced wasn’t from the PTA but from a room mom and the school wasn’t even aware of it. The PTA came out saying they categorically denied any attempt to block Christmas expression, calling it an “unfortunate misunderstanding.” The statewide criticism surrounding the non-event at the school district hasn’t helped the shaky conservative argument while likely pissing off the district to no end.

Other misunderstandings may abound as a result of the law, worries Cheryl Drazin, Southwest civil rights counsel with the Anti-Defamation League. While the first section deals with issues like holiday greetings and parties—already well codified within federal law—the ADL takes issue with the second part of the legislation, which dictates religious public displays for schools—a gray area open to subjective symbolism.

Allegheny vs ACLU, a 1989 U.S. Supreme Court case, determined which certain combinations of religious displays on public grounds are constitutional as per the establishment clause. For instance, a nativity scene on its own is not permitted, but a Menorah and a Christmas tree arrangement is allowed because both present secular meaning. However, the Texas statue allows for one religious symbol and one secular symbol, potentially muddying the waters.

“The way the law is worded, it probably creates some legal confusion for what’s permissible for schools to do regarding displays,” says Drazin. “I think it gets really scary for school districts [and] campuses to figure out what’s OK and what’s not OK.”

“At best, the state law is fuzzy; at its worst, it’s in conflict with federal law,” says Drazin, “… a school could think they were relying on the bill for good information and wind up in litigation.”

So, in effect, a law meant to protect school districts could actually end with a trail of lawsuits, making this (not creepy at all) quote from Texas Values president Jonathan Saenz seem as logical as the bill itself: “We hope the Merry Christmas law will lead to less school districts being naughty and more being nice.”