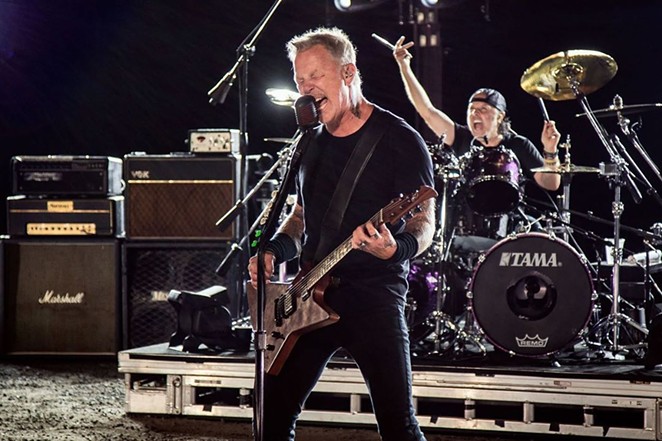 With the COVID-19 pandemic grinding on, Metallica offered fans a newly taped concert for an evening at the drive-in. The Saturday, August 29 screening, which took place in San Antonio and dozens of other cities, served as a reminder that life these days is all about moments, some of them fleeting.

The blazing summer heat felt appropriately dystopian as masked-but-friendly Fiesta Texas employees directed parking in a manner vaguely reminiscent of disorganized outdoor venues. It was a scene beyond imagining a year ago.

Indeed, prior to the show, the lot felt straight out of a real concert. Patrons milled between cars blasting Metallica, shirtless brahs did their thing and the faintest whiff of weed wafted in the air. Almost a concert cosplay, if you will.

The show started promptly at the 8:30 p.m. ticket time — and without fanfare. Metallica simply appeared, casually, on the drive-in screen with a simple greeting from frontman James Hetfield as the band stood on a stripped-down stage. No opening credits. As they tore into “Seek and Destroy,” it seemed the band was going to break some of their own rules and change up its typical setlist. Would the show feature rarely played tracks or other surprises?

And where was the billed opening act, Three Days Grace? A quick check of Twitter revealed that others noticed the absence of Three Days’ set and noted that three Metallica songs were missing before “Seek and Destroy.” It’s unclear how or why those weren’t aired, but patrons at the SA showing appear to have missed an hour of the presentation. At $100-plus a carload, Fiesta Texas will likely need to prevent this in the future, particularly since one of the billed acts was omitted entirely.

The most successful aspect of Metallica’s set was the newly introspective nature of the music. Granted, that probably wasn’t by design but rather a strength of the band’s songwriting. Several of its classics seemed to address the pandemic directly, including “Nothing Else Matters” (“So close no matter how far”) and “Fade to Black” (“Getting lost within myself / nothing matters, no one else”). The ballads were, surprisingly, the highlight of the evening, reminding the audience of the power of context to shift meaning — something the best bands benefit from.

“The Unforgiven” took on a cinematic quality in the outdoor setting. And, in the highlight of the show, the evening’s Fiesta Texas fireworks took place during “Now That We’re Dead,” from Metallica’s most recent album, Hardwired… To Self-Destruct. The band also played the album’s strongest track “Moth Into Flame,” and the record’s title track opened the show. Although the latter was obviously omitted at the Fiesta Texas screening.

In contrast, bangers such “Enter Sandman,” fell flat, with only the cheers of the drive-in crowd to carry the sing-along Hetfield requested from the screen. Once touring resumes at some point, it will be interesting to see if smaller venues and socially distant shows force acts to rethink their setlists and pacing.

That’s not to say San Antonio’s drive-in crowd wasn’t enthusiastic. The expected older tunes, including “Creeping Death,” and “Master of Puppets” engendered a roar, just much smaller than the one you’d hear at a real Metallica show.

And, in the end, that highlighted the difficulty Metallica was unable to entirely overcome. At times, the performance served to remind us what we have lost, particularly during a video montage played before a ferocious “Battery.” Those vintage clips showed Metallica performing before an actual arena crowd, and the difference was stark.

Saturday’s event served as a snack between meals — a bite before the return to actual live shows that attendees were clearly craving.

A “concert” flashed onto a drive-in screen could never take the place of the real thing, and it’s unfair to expect it to. The best bands have great sound systems, while a show like this is contingent on the quality of the patrons’ car stereos.

As the crowd drove out, only one question remained. When will punk legends At the Drive-In get it together to offer one of these shows — if only for the merch and humor opportunities? Someone page Abbott and Costello!