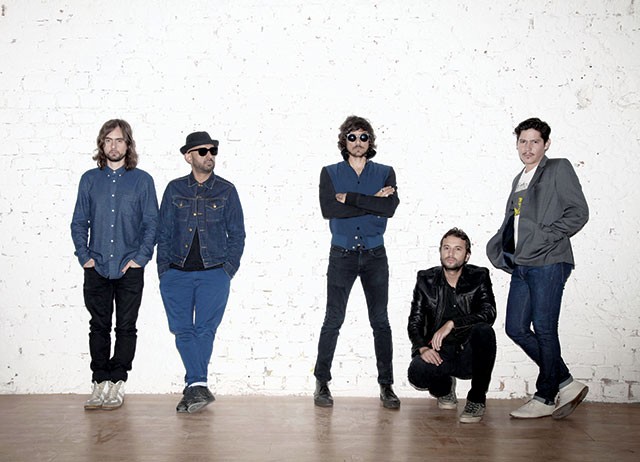 Psychedelic, space-rock en español band Zoé was perfectly happy being a well-established, semi-underground act in Mexico. León Larregui’s moody vocals, the band’s solid musicianship and songwriting, and hermetic lyrics were enough to enjoy a long run since 2001, though the critical respect was bigger than the sales. The members of Zoé lived in their own bubble, under the shadow of big acts like Maná and Café Tacuba, but holding their own. From the beginning, their work with Phil Vinall (who mixed some tracks on Elastica’s 1995 debut and who has worked with Radiohead and Placebo, among others), helped the band evolve smartly, earning Zoé a devout following.

“Yeah, I agree,” Larregui told the Current on the phone from his home in Mexico City. “We were sort of like in a league of our own.”

Slowly and steadily they got by, and little by little started getting the awards. First came a Latin Grammy nomination in 2007 for Memo Rex y el Corazón de la Vía Láctea (“Memo Rex and the Heart of the Milky Way,” a Ziggy Stardust-like project), their third album. Then, a MTV Latino win in 2009 (Best Rock Group) and another Latin Grammy nomination for Reptilectric, their fourth full-length. Things were looking good, but nothing spectacular. After releasing a live album in 2008, they were working on a follow-up when an unexpected call came in: MTV Latino wanted them to record an episode of MTV Unplugged. Not only that: they needed to stop whatever they were doing and start working on it.

Weird. Electricity and spacey vibes are Zoé’s calling card. But they liked the idea and went for it.

“It was a real challenge,” Larregui said. “We were working on our new album, but had to stop everything. We call it ‘a fortunate interruption.’ We thought it was a great idea, but we didn’t want to do the usual campfire versions—we wanted to do something interesting.”

Música de Fondo: MTV Unplugged (2011) became the biggest album of their career, winning two Latin Grammy awards and selling more than 400,000 copies worldwide to date. After touring for almost two years, the band took a break and Larregui had time to record a solo album he’d been thinking about for a while. At first he wanted to do an EP, but Adanowsky (the musician Adan Jodorowsky, son of famed Chilean director Alejandro Jodorowsky) convinced him to do a full-length instead. Wise move—the album reached the top of the charts in Mexico and got two more Latin Grammy nominations (Best Alternative Music Album and Best Alternative Song for “Brillas”). The winner will be announced November 21 at a ceremony in Las Vegas.

“I recorded the album in France with French musicians, which was perfect because I was looking for that Serge Gainsbourg vibe, and [Adanowsky] is a Gainsbourg expert,” said Larregui, who was listening to his own album when the Current called. “He understood this was a different thing from Zoé, and the nominations were the cherry on top of this adventure. It would be great to win.” (He has tough competition to deal with, especially coming from fellow Mexicans Café Tacvba and Natalia Lafourcade, and Argentina’s Illya Kuryaki & The Valderramas.)

Finally, with the tour and solo album behind them,the band was ready to resume work on the album they had interrupted to record the Unplugged episode. In spite of its cover alluding to their usual interest in sacred geometry, alchemy and space themes, Prográmaton, released October 29, is the band’s most down-to-earth album.

“[Prográmaton] has a very existential tone but it’s also our most … terrestrial album,” Larregui said. “We talk about life and death but it’s more direct, not so many metaphors. I guess we’re more mature now…”

The new tour finds Zoé at their highest point and attracting new fans, but playing in San Antonio is sort of like a home away from home.

“[SA] is Mexico,” Larregui said. “[In SA] we feel the same as we do in Mexico, even though we’re perfectly aware we’re not in Mexico, you understand? We’ll be in a country [United States] where all the cities look the same: the same stores, the same gas stations, everything so impersonal. But the good thing about Texas is that the people you play for are all from Mexico and a lot of people come to see us from Mexico. It’s kind of weird.”