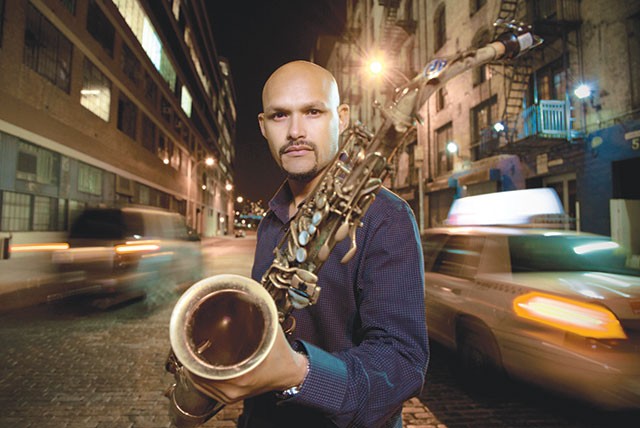 Just last month, Grammy-nominated jazz musician and composer Miguel Zenón brought the music of Louis Armstrong to the small mountain village of Aibonito in his native Puerto Rico. The free concert was part of Zenón’s Caravana Cultural and packed the band room of La Escuela Rafael Pont Flores with first-time jazz listeners. Zenón created the concert series in 2011, utilizing funds he received from his 2008 MacArthur Fellowship, also known as the enviable “Genius Grant.”

“Ultimately, the project is really about making a case for the importance of culture,” Zenón said via telephone from New York City. “I’m one of those guys that believes culture can play a big part in raising society up, and I think this kind of cultural activity should be available to everyone, not just to a chosen few. Not just to people who can afford it or people that are more informed.”

Growing up in San Juan, Zenón formally embarked on his path as a musician at the age of 10 when a teacher began giving free music lessons to the children in his underdeveloped neighborhood. In seventh grade, Miguel enrolled in the Escuela Libre de Música, where he initially hoped to focus on the piano. When he discovered that all the piano chairs were taken, Miguel settled on the saxophone because someone in his family had the instrument “lying around.”

Zenón and his saxophone went on to receive degrees from the Berklee College of Music and the Manhattan School of Music, releasing his debut album Looking Forward to critical acclaim in 2002. Since then, Zenón has released seven additional albums as a bandleader, becoming increasingly recognized for his reverence of Puerto Rican music.

“I’m very serious about knowing the tradition of the music that you’re dealing with,” Zenón said. “Once I started to explore writing my own music and working on my own projects, I took the same approach to the music of Puerto Rico. So the more I went into studying and getting a little more informed, that information started finding its way into the music that I was writing and the projects that I was putting together. It became an organic marriage with some of the jazz elements that I was already dealing with at the time.”

Zenón returns to San Antonio this week after a seven-year absence, touring with the SFJAZZ Collective, an ensemble he helped found 10 years ago in San Francisco. He speaks enthusiastically about a forthcoming documentary focusing on Caravana Cultural called Harmonia and a new album titled Identities Are Changeable. Slated for a fall release, the music features a 12-piece big band with a pulsing rhythm section and focuses on the evolving national identity of Nuyoricans (aka New Yorkers of Puerto Rican origin.)

“It’s pretty much become my main role,” says Zenón. “To try to find a meeting point between the jazz tradition and the tradition that’s coming from Puerto Rico, the Caribbean and Latin American music. I really feel that in order for me to be happy, in order for me to be true about what I’m doing, I have to be honest about what I am and what I represent as a Latin American musician and as a Puerto Rican musician.”