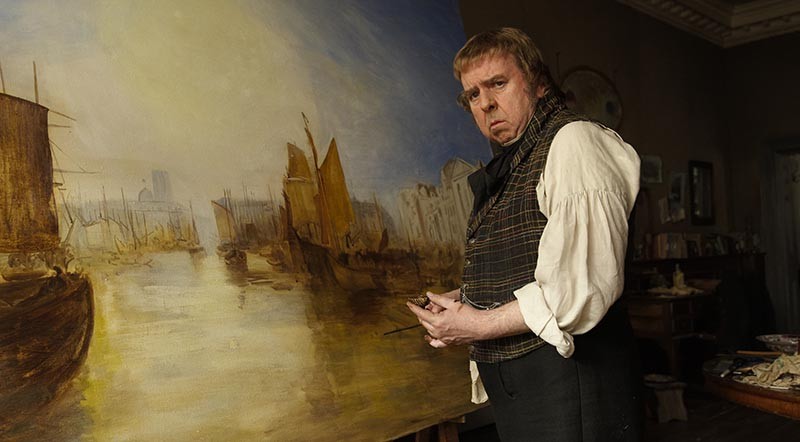 The auteur theory suggests that a film reflects the personality and artistic vision of its director. That may be true for most great movies, but directors such as Mike Leigh understand when to surrender their own aesthetic.

Mr. Turner, a sublime journey through the life and work of renowned English landscape painter Joseph Mallord William Turner, is such a surrender. Not only is it paced and shot like a contemplative stroll through a gallery, it's structured to allow the artist's life to wash over you slowly, enveloping you in the simpler, horse-drawn, oil-lit era of early 19th-century England. Taking us through the last 25 years of Turner's life, Leigh has created a memorable work of art in his own right, carefully balancing quiet, everyday moments with personal events of revelatory power — much like Turner did with his oils and watercolors.

Timothy Spall, as Turner, has never been better, gruffly yet endearingly grunting and mumbling his way (in thick Cockney) through a transformation that earned him best actor at Cannes. It's not the year's best performance, but Spall's exclusion from the list of Oscar nominees is a major oversight.

Turner was haunted by the death of his father (the endearing Paul Jesson) and unable to show affection for the mother of his children or for his loyal housekeeper (the heartbreaking Dorothy Atkinson). His stunted emotional development was evident in his treatment of them and in his relationship with the rest of the world, which he seemed to embrace only through trips to whorehouses, his secret 20-year affair with a widowed acquaintance (Marion Bailey) and, of course, his paintings.

As with Turner the man, Turner the film will not be everyone's cup of mead. It too requires patience and is comprised of scenes lacking great meaning and power, content to amble along creating an impression of a life. In that respect, it has much in common with the painter's later works, which eschewed form for emotion, years before impressionism. But like those works, the film affects you gradually, and before you know it, you've become almost as haunted as the subject.

Helping rend that reaction is the year's best art direction. Rejecting CGI when possible, Leigh's team painted and reworked countless buildings and even used an authentic steam train to re-create Turner's famous Rain, Steam and Speed sans green screen and with a true sunset, according to London's Daily Mail. Leigh even hired a painter to faithfully reproduce Turner's works (using cheaper reproductions only in long shots) and taught Spall to paint in Turner's mad style, proving his staggering devotion to detail.

"You are a man of great vision, Mr. Turner," the artist is told. "The universe is chaotic, and you make us see it."

To allow an audience to see the chaos that was Turner himself also takes great vision, and Leigh, that most authentically English of directors, was clearly up to the task.