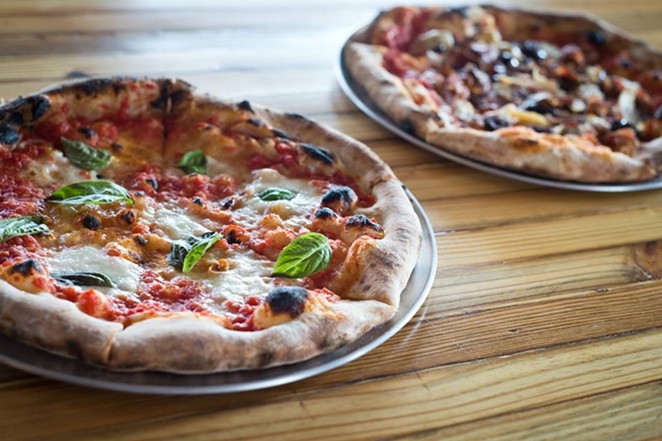 Chef, restaurateur, gardener, father, writer Mike Sohocki knows what San Antonians want. After leaving The Cove to open 1800-inspired Restaurant Gwendolyn, earning a James Beard Award nomination along the way, opening the city’s first noodle shop with Kimura and likely working on other secret projects, the chef opened what could be his best eatery to date. At Il Forno, the perfectly charred and blistered pies, topped with fresh, local, organic ingredients await. We talked with chef about his pizza philosophy and what makes a great pie.

So, why a pizza place?

Ernie (Bradley) and I were having our New York Style weekly meeting one day, talking as usual about multi-course ne dining with arcane preparations and odd ingredients, or about tonkotsu and tonkatsu and oyakodomburi and so on — and somebody said “Man ... wouldn’t it be nice to serve something we didn’t have to explain?” and somebody else blurted like a 4-year- old “Pizzaaaa!” And there was a long silence. And there was the gauntlet right there on the oor.

What are the biggest challenges in running an establishment like Il Forno?

Convincing Americans that pizza is not American.

It’s supposed to be razor thin, and cooked at 700 degrees in a matter of seconds. It’s SUPPOSED to have black blisters. The ingredients also need to be thinly applied: if you pile 6 1/2 pounds of junk on a fat slab of dough, it won’t cook.

American pizza — that fat, slovenly, light-colored mountain of sweated cheese and bubbling grease on a swamp of gummy eshy dough — is made possible only by electric deck ovens that cook at 400 degrees or even less. AND IT’S WRONG. In a way, that’s the HARDEST food to make for people. When you serve a soup a la Vizcaina, or an aqua pazza or “tan-tan” ramen, criticism
is limited to the very few people who have traveled or lived in southern Italy, Spain, Portugal, even China. But dare to serve a “pizza”, and every plumber and concrete worker in the union will be hammering on your counter saying “now let me tell YOU something about pizza.”

Stop FIGHTING tradition, damnit. EMBRACE it. Sometimes I want to scream: Lay down your weapons and surrender!

Describe your personal ideal pizza? Any style, any toppings, what would you eat?

I am a purist. Eating is like prayer and I want my church clean. I will bake
myself a blank piece of dough until it is dark and crackly on both sides, slather it while steaming in extra virgin olive oil, and a sprinkle of salt.

What’s the best place in San Antonio, besides Il Forno, to get pizza? Why?

Have you tried the pizza from that guy in the food truck park in Southtown (Sulla Strada Pizza)? All the right things are present — purely wood-burning oven, dough proofed for hours or even days, thin toppings, respectable color on the crust. Very impressive — and a food truck, no less!

What has been the most successful item since Il Forno’s opening?