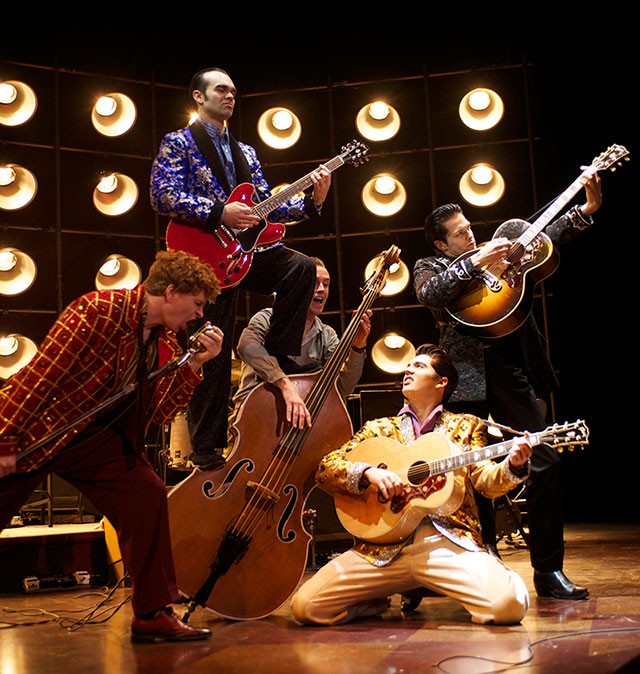 In some ways, this is the world’s easiest review to write: if you admire the music of Elvis Presley, Johnny Cash, Jerry Lee Lewis, and Carl Perkins, and if you like tribute concerts (like the oft-touring Rain: A Tribute to the Beatles), then you’ll enjoy the energetic Million Dollar Quartet, currently lighting up the Majestic downtown.

But if you don’t like tribute concerts, then it’s hard to recommend MDQ as a genuinely theatrical experience: the book, by Colin Escott and Floyd Mutrux, is a frustrating affair that basically marks time between musical numbers, and the song list seems almost randomly ordered. (Indeed, introductions to songs sometimes take the shape of “Hey, Elvis, remember that great song you once performed? Why not play it now?”) So, for the first 90 minutes, I kept wondering why the authors even bothered with social realism, as they re-created a fabled jam session at Sun Records in Memphis in 1956. But then an amazing thing happened: just as I pondered why the entire evening wasn’t instead constructed in the form of a big, splashy, Las Vegas tribute show, the entire, realistic set dissolved and morphed … into a big, splashy, Las Vegas tribute show. It was perfect wish fulfillment; I’m still a little freaked out. (I mean, if I’d known that was going to happen, why couldn’t I have wished for a cure for cancer? Or a coherent sixth season of True Blood? My apologies, everybody.)

The plot — such as it is — follows the financial frustrations of record producer Sam Phillips (Vince Nappo), whose Sun Records helped launch the career of many of the most famous artists of early rock. There’s some manufactured tension between down-and-out Perkins and rising star Elvis, and some flashbacks that demonstrate how Phillips discovered each of the performers, usually by exhorting him to play with all his soul, etc… The problem is that (I’d wager) few Majestic patrons were at MDQ to learn much, or anything, about Phillips.

Ironically, according to the program, Phillips, as a producer, “looked for innovation, not imitation. But MDQ, as a musical, is predicated on imitation, not innovation; indeed, that’s all there is. The imitation, for what it’s worth, is pretty amazing: there’s Cody Slaughter’s uncanny Elvis (Slaughter was named Elvis Presley Enterprises’ Ultimate Elvis Tribute Artist of 2011, which is a mouthful); James Barry’s prickly, expertly acted Perkins; David Elkins, who brings an appropriately gravelly voice to the stylings of Johnny Cash; and Ben Goddard’s hyperkinetic Jerry Lee Lewis. There are even a few numbers with fifth wheel Kelly Lamont, who pretty much steals the show with an expertly sung version of “Fever.”

The song list covers many of the audience’s favorite hits —“Blue Suede Shoes,” “Sixteen Tons,” “Hound Dog” — but I generally preferred the quiet, more spiritual numbers. “Down by the Riverside,” for instance, was a highlight. The last 15 minutes are performed as a fantasy Vegas show (conjured by me!), with ecstatic baby boomer patrons practically gyrating in the aisles. There was, indeed, a whole lotta shakin’ going on.

The show runs without an intermission, and concludes shortly before the two-hour mark; it’s efficiently directed by Eric Schaeffer and performed with brio. You, gentle Current reader, already know if this is the type of show for you.