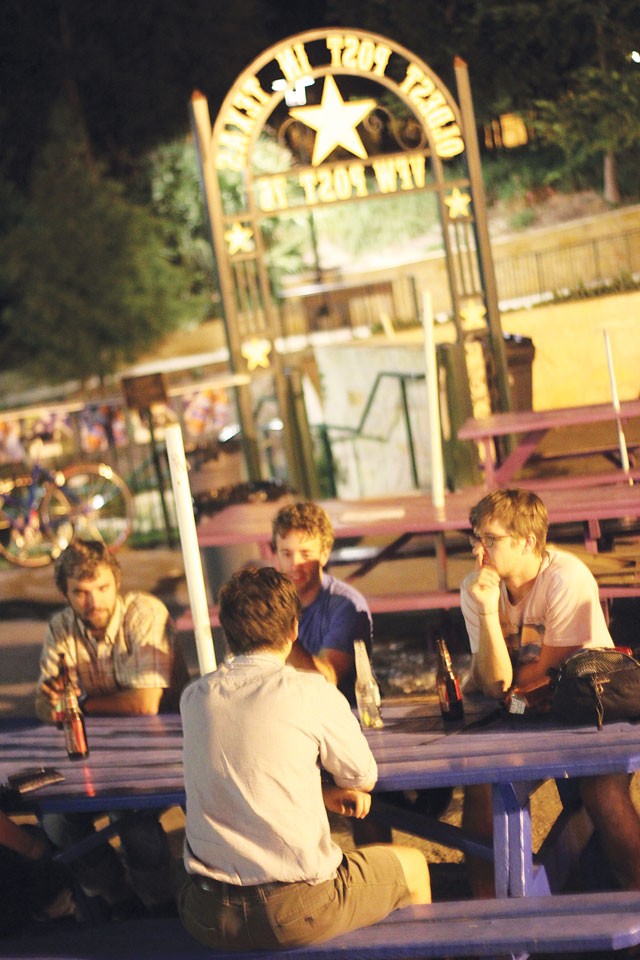 Q: “What are the four fruits that make up the Fruit of the Loom logo?”

A: An apple, red grapes, white grapes, and gooseberries.

Q: “If I have ten apples and you take away six apples, how many apples do you have?”

A: Six. You know, since you took them.

Q: “What do you call a black person from Plano?”

Let’s back up for a minute. The Scientists (a semi-anonymous group of semi-professional drinkers on a mission to evaluate San Antonio’s bars, pubs, and nightspots) set up our lab last Friday at the famed VFW Post 76 to have a few cold brews by the river, enjoy some Tejano music, and mingle with the regulars. The VFW is an icon of the San Antonio bar landscape — a supposedly haunted, old-but-still-looks-good-for-its-age three-story mansion owned by veterans, for veterans. This “members only” atmosphere can be intimidating for newcomers, but the bar’s been open to non-uniformed folks for decades. In other words, soldier and civilian alike are welcome to chug beers like it’s their last day before deployment.

With the recent River Walk expansion, the VFW now has — in our opinion — one of the best drinking patios in town. There’s a healthy dance floor and a live band blasting Tejano music, if you’re into that sort of thing. (If the accordion isn’t your bag, too bad — VFW’s outdoor stage is so loud that it obnoxiously bleeds over onto the 1011’s own great patio next door.) VFW’s beer selection isn’t very deep but it is cheap, and all the usual suspects are represented. I stuck with Shiners all night, with many Scientists keeping it Texan with Lone Star bottles ($3). Beer connoisseurs and music snobs may be disappointed by the lack of variety in drinks and tunes, but VFW is pretty much a no-frills kind of bar catering to no-frills kinds of people.

Inside the bar, a pair of guys in their late 40s, early 50s drinking Bud Lights struck up a conversation, and soon we were subjected to rounds of harmless bar trivia (the Fruit of the Loom question had us pretty stumped, for the record). But when the jokes crossed the color line, I had to check my iPhone to make sure it was still 2011. And when Dave Chappelle didn’t leap out and declare the whole thing a comedy sketch, we excused ourselves to the patio to debrief.

Luckily, the vibe outside wasn’t just more welcoming — it was basically a block party. Cold brews by the river and louder-than-grindcore Tejano worked their magic. As midnight struck, rolling us into October (the best month of the year, according to Dr. Wardlaw, Halloweenologist), we agreed that, despite the earlier speed bump, VFW’s patio was the best place to bask in crisp fall weather. Dating back to the early 1900s, VFW Post 76 has seen a lot of history — and sometimes that includes stuff nobody’s proud of. But ultimately it adds up to an experience unlike any other bar in town. A great American veteran* once told his mother, “I don’t agree with your dirty doings here, but I will defend with my life your right to do it.” True enough — even if that couple probably should’ve just quit after the gooseberries. •