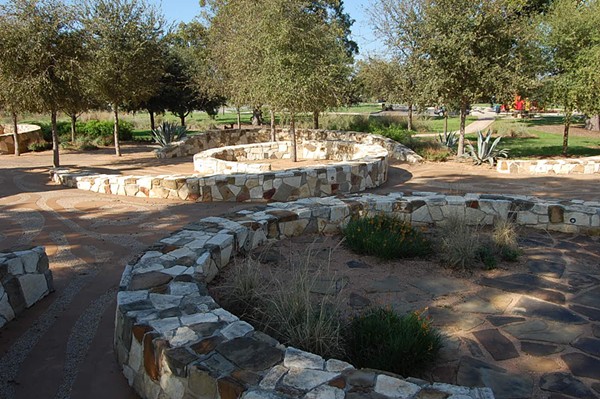 San Antonio's Spanish missions are in many ways portals themselves.

Now that they're part of a UNESCO World Heritage Site, the missions are a link between our local environs and the rest of the world. Between the natural landscape of the river they're built along and the urban sprawl that's risen around them. Between the ancient rural legacy of San Antonio and the metropolis it is today.

It makes sense then that each of the missions would have their own public art portal to signify the straddling of these borders. And with Mission San Juan's "Whispers" by Belgian artist Arne Quinze joining "River Return," by Stacy Levy at Mission Concepción, half are now complete.

All four of the portals share a mandate: to reconcile the modern with the ancient, and the man-made with the natural.

But outside of those parameters, the two complete portals offer few clues for what the remaining two, at Mission Espada and Mission San Jose, have in store.

"There is a desire ... that these pieces should be of their place and time," said Stuart Johnson, project manager for the San Antonio River Foundation, which spearheads the portal project. "So we want really nice contemporary artwork, but I make it very clear that [the artists] are working within the environment of structures that have been around close to 300 years."

"River Return" is situated between the San Antonio River and Mission Concepción. It's constructed entirely of stone, accented by native plants. But Levy has arranged the rocks so that they seem to swirl and riffle freely. From its centerpiece, a raised platform, you can see both the river and the top of the mission peeking over the trees.

"Whispers" sits along the Mission Reach trail near Mission San Juan. It's composed of a series of sentry-like multicolored metal structures. Meant to mimic the vivid hues of Texas wildflowers, the tall, slightly concave posts look like colorful reeds, and the wind whistles through slits carved in their tops.

Each portal is also meant to somehow reflect each Mission's interpretive theme as assigned by the National Park Service: the religious legacy of the Catholic Church and its mission system at Concepción, the experience of the American Indians at San Jose, ranching at Espada, and agriculture and nature at San Juan.

"That served as a point of inspiration for some of the artists," said Jimmy LeFlore, public art manager for the city's Department of Culture and Creative Development and a member of the River Foundation's Art and Architecture Committee. "Information can be extracted and artists can ... say 'This piece of content from the mission history made me make this decision.'"

It's not so easy to find an artist able to strike that balance. To do it, the River Foundation turned to its Art and Architecture Committee, which is responsible for developing some guidelines for the pieces and then selecting an artist for the project. Once they agreed to the project, there are few strings attached to each artist's vision.

"Generally, because of the caliber of artist we're working with, we are very open to what the artist feels is best for the site," Johnson said.

Which means it's almost impossible to predict what could be in store for the Mission Espada and Mission San Jose portals. Both are still in the planning stages, with San Jose likely closer to completion.

The River Foundation tapped Mel Chin for the San Jose Portal. Chin is a Houston native who now works from a studio in North Carolina. His portfolio traverses a broad scope of media and subject matter.

One of his installations, "Spirit," features an oversized barrel on a grass-and-grain tightrope, commenting on the tenuous balance between consumption culture and agricultural production. Another, "The Seven Wonders," is a permanent feature of Houston's Sesquicentennial Park. Stainless steel plates are stacked on top of each other, with stencils of children's illustrations cut out by lasers.

As with bringing Levy and Quinze onboard, snagging an artist of Chin's caliber was a high priority for the River Foundation, according to LeFlore.

"That was something that was really important for thinking long-term about the mission portal artwork," LeFlore said. "We, of course, weren't aware at the time that we would have the World Heritage status, but we knew that his is a hugely significant opportunity to have an artwork connected to our river, connected to our historic mission."

Some details of Chin's plans for his piece at San Jose will likely come to light by the end of this year, when the River Foundation begins its public review process for the piece. Although the design could change, Johnson said that the piece will straddle the line between the ancient mission and the present day.

"That one is going to be a very contemporary piece, but it will also hearken back history. It's like natural history as opposed to the built environment," Johnson said.