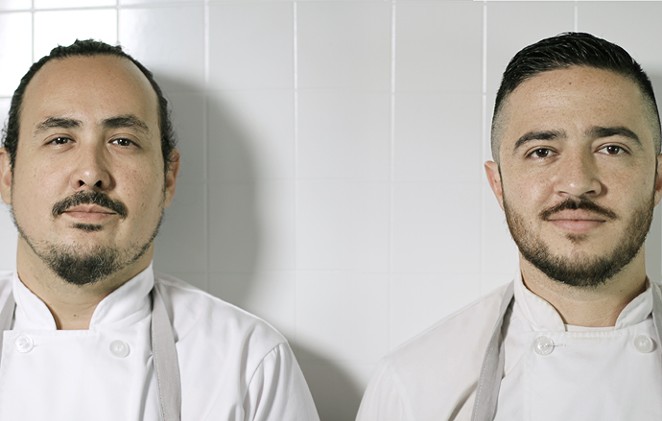 Local chefs Rico Torres and Diego Galicia of Mixtli (5251 McCullough Ave.) are ready to show New York City what San Antonio can do in the kitchen. Both were chosen to participate as guest chefs in a "Progressive Mexican" dinner.

On Thursday, April 28, Galicia and Torres will serve a nine-course meal at the James Beard Foundation that includes Ceviche del Dia (watermelon with tamarind and vanilla), Sope de Frijol Negro with Hoja Santa and Madeleines, Mancha Manteles (root vegetables, plantains and chayote) and Cerdo al Pastor (pork ribs with chicharrones and pineapple). For dessert: Cheesecake with Blackberries and Guava.

"We admire [Chefs Diego and Rico's] elevation of Mexican cuisine, their study of its regionality, their focus on sourcing food conscientiously and mindfully, and their ambitious charitable work," said Izabela Wojcik, Director of House Programming for JBF.

If you're mouth is already watering and you'll be in the New York City area Thursday, make a reservation here for dinner at 7pm or call (212) 627-2308. Seats are $170 for the general public and $130 for members of JBF. To check out the action the night of the event via the JBF Kitchen Cam, click here.