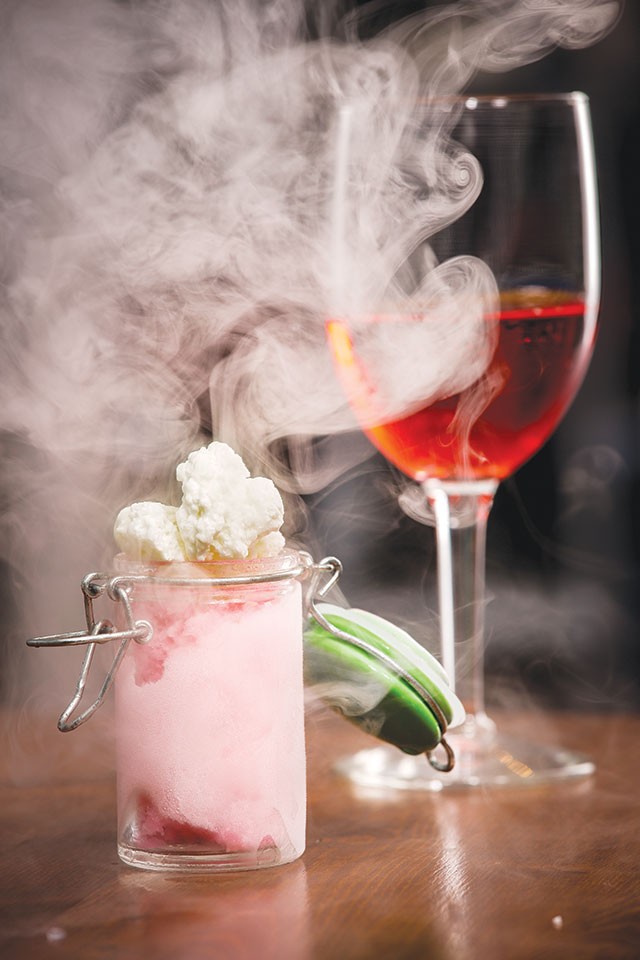 The notion of selling tickets to a restaurant dinner as though it were a night at the theater is not entirely new (avant-garde Chicago chef Grant Achatz has found it a viable business model), but it’s new in notably trend-averse San Antonio. All the more surprising is that the idea has been taken up by a duo of young chefs embarking on their first venture. In a railroad car. For a maximum of 12 people at a time. At $80 a pop including service and selected beverages.

Mixtli, which means ‘cloud’ in Nahuatl, is the name chosen for the enterprise by Rico Torres and Diego Galicia, the former from a catering background, the latter with experience at restaurants in this country and Mexico. (In a burst of confidence, Galicia recently left his job as corporate chef for Taco Cabana.) The cloud, for them, serves as a kind of muse, floating from one regional cuisine to another in the vast and varied country that is Mexico. Mixtli’s themes will change every 45 days; the inaugural one, which ends on November 15, centered on Oaxaca. Since by the time you read this the errant cloud will likely be parked over a different region of Mexico, the following can only be an approximate weather forecast.

Our meal began with an agua fresca of green cactus fruit accented with ginger and lime in which floated a lime blossom from the tree outside the handsomely fitted-out boxcar. Delicate and perfumed, it was a perfect introduction to what was to come—in our case, a single, platonic chochoyote.

Chochoyotes are masa dumplings, usually served in broth. Mixtli’s rendition was of blue corn, but, there being no broth in sight, the dumpling’s typical indentation served to cradle a tiny cube of panela cheese. Trace elements of squash blossom and huitlacoche completed the carefully composed plate.

With Torres generally serving and Galicia plating, the first main to appear was a single, impressive shrimp on a brushstroke of chileajo, a paste made from guajillo chiles and garlic that is typically served over vegetables. Mixtli’s take extracted the garlic and made a delicate foam of it to be served alongside.

Torres appears to be Mixtli’s Mole Man; his mole negro adorning duck on a blue corn tortilla was composed of several chiles, some of them seriously charred, and included pecans. Though a little more thermal heat might have been appreciated, the pairing was impeccable. Oaxaca being almost as known for its moles as Puebla, it was appropriate than a mole amarillo should appear next. It was also appropriate that mezcal, another Oaxacan specialty, should be served in the form of shots with a traditional salt of toasted chiles y gusanos (worms, yum).

The amarillo, yellow in name only, served here as a framework for a sous-vide Texas quail plated with black bean puree. For all the of-the-moment technique displayed, sous-vide quail doesn’t yield a very appealing texture, and the black beans needed seasoning—maybe some of the asiento (lardy pork drippings) that gave life to a toasty tlayuda (another masa shape made from corn the pair process themselves) served with a smoky tomatillo salsa.

At this point, one part of me wanted something more substantial—maybe a dish reinterpreting Oaxaca’s lusty dried pork called cecina. The tamal Oaxaqueno, course five out of eight, might have provided that change of pace, but the cube of masa with a lid of banana leaf proved to be as abstract (and exquisitely turned out) as most previous plates showcasing ancient techniques in the service of contemporary cuisine. A drink of light, yet intense, cacao (the guys roast and grind their own chocolate) and honey followed.

By definition, a cloud can never come down to earth. But for those willing to let their feelings about ordinarily earthy Mexican cuisine be upended, silver linings abound. In spite of a lingering feeling that parts of the evening had been more entertaining than sustaining, we left Mixtli convinced that the experience, a ticket to the theater after all, had been altogether worth it—and ready to come again when the nomadic nube settles over, say, Sinaloa. But should you exit in need of a follow-up taco, we won’t tell.

5251 McCullough (in The Yard)
(832) 520-8928
restaurantmixtli.com
Best Bets The menu changes often, but trust the moles and the attention to detail paid to the corn
The Skinny Mixtli’s culinary theme moves from region to region in Mexico every 45 days. The menu utilizes both ancient methods and contemporary techniques in service of a reinterpreted cuisine. Expect a minimum of eight courses, each paired with appropriate beverages.
Hours Wed-Sat at 7pm, admission by previously purchased ticket only Price $80 plus tax