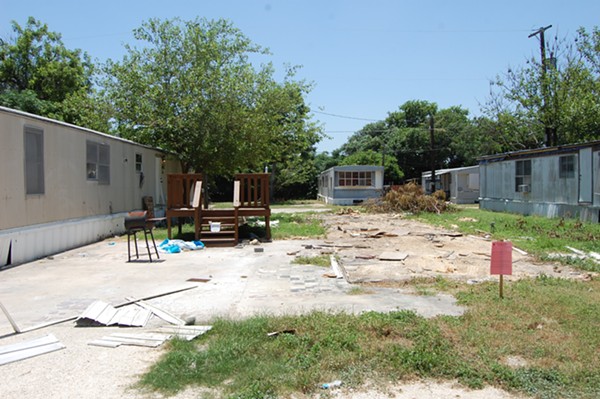 Ginger Clark had almost fixed up her mobile home just the way she wanted it when she was told she had to move.

She lived in the Plaza Mobile Home Park on the Northeast Side for about two months. She painted the porch and trim around the windows kelly green, and installed a walkway of pavestones leading from the spot where she parked her SUV to the porch steps (the long-term plan was to fill in the gaps with pea gravel). Little touches inside the long, narrow structure — a Betty Boop throw pillow, a faded Texas flag above a doorframe — made it feel like home.

But Clark doesn’t live in the mobile home park anymore. Soon, no one will. Its residents were all evicted this week after the property owner, Joseph Sandoval, failed to pay the water bill for the property. The park’s water was shut off, and the City’s Development Services department evicted residents due to the unsafe and unsanitary conditions.

“The owner doesn’t care about the tenants,” Clark said. “He never did anything to try and help us.”

Sandoval owes about $4,500 to the San Antonio Water System. This is the third time this year the park’s water has been shut off due to unpaid bills. Residents were not evicted after the first two incidents because Sandoval paid the truant fees (although they were without running water for more than a week), but the two checks he wrote to SAWS for the most recent bill both bounced.

SAWS officials decided to cut off the property’s water on June 13, and the City’s Code Compliance department notified residents then that they had 72 hours to vacate the property, although they could still come and go to move their belongings.

“The poor people there didn’t do anything wrong,” said Rod Sanchez, director of Development Services. “It’s just unfortunate that this landlord is a bad actor. He didn’t do the right thing and it put everyone in a bad situation.”

The department evicted eight households comprised of 17 adults and 12 kids.

The park’s tenants paid each month’s rent and water bill to Pat Molina, the property manager, who then deposited the money into one of Sandoval’s accounts at Jefferson Bank. But the money never reached SAWS. Code Compliance officers warned residents weeks ago that they might be evicted if Sandoval didn’t pay his bills.

“We did all we could to not get to this point. But we knew it was coming and we were prepared. … We had no choice but to act,” Sanchez said. “We used the vacate order to protect them. There’s no running water, it’s just not safe for them to be there.”

Neither the City nor SAWS have reached Sandoval since the water was shut off. Molina hasn’t heard from him since June 12. He did not respond to multiple attempts to contact him for this story. Molina said that Sandoval hasn’t paid her in six months.

Anne Hayden, a communications manager for SAWS, said that the water turnoff was the culmination of several payment issues the utility has had with Sandoval stretching back to 2012. But that’s not the first time he ran into trouble regarding the property’s water.

Sandoval acquired the property in 2002. In 2006, the Texas Commission on Environmental Quality fined him $2,800 for failing to obtain a permit to collect water bills from tenants, and for not conducting bacterial tests on the water.

He owns several other properties in the San Antonio area in addition to the park. None of those have had payment issues with SAWS.

Code Compliance will pursue a criminal case against Sandoval. He could be charged with failing to provide access to water, which is a class C misdemeanor that carries a maximum fine of $500.

If Sandoval paid the $4,500 he owed SAWS, the utility would turn the water back on. But even if that happens the City’s advising the tenants not to return.

The City’s Department of Human Services is helping the park’s residents with the transition. The City will pay the security deposit and the first month’s rent on a new rental property, provide utility assistance and storage assistance. A caseworker has been assigned to each family to help them locate housing. The City has also paid for the residents to stay in a hotel for up to a week while they find a new place to live.

Relocating so suddenly is difficult, Clark said, especially when one unexpectedly has to find a way to house pets, pay application fees and make the time to move. But it’s an even bigger burden for the park’s tenants who own their mobile homes.

Norma and Jesse Mendez have lived in a mobile home they own on the property for over a decade. They had no plans to move before being evicted. Although they've made improvements to their property — including a garden and an awning extension — the trailer itself is in too rough of shape to be moved.

“We have no other choice but to sell,” Mendez said. He’s worried that any offers for the home won’t approach its market value under normal circumstances, given his lack of leverage and the water situation.

Sanchez said that the City may provide assistance for a mobile home to be moved. But if the home must be sold because it cannot be moved, or its owners can’t find a place to park it, the City will not help recoup the home’s lost value.

Molina and her wife, Krista Cox, also own their mobile home. They’ve found a plot of land in Bandera to move it, but it lacks a septic system. They’d like to keep the home and move, but they need about $5,000 to build the system.

“Everyone has worked to buy something,” Cox said, gesturing toward the mobile home. “That’s what everyone wants in life.”