Monsters in the making: 'Face Off' and 'Fatal Honeymoon' 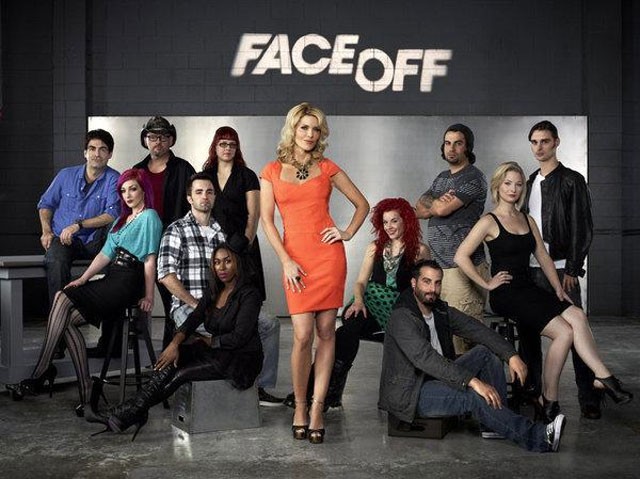 Face Off (8pm Tue, Syfy)
In its third season, this delightful reality competition features a fresh batch of special-effects makeup artists, all determined to make a mark in Hollywood. These artisans are obsessed with aliens and monsters, and we get to watch them work wonders with glue, foam, and clay. “I really know how to gross people out,” one contestant says with justifiable pride.

The challenges test their creativity, not to mention their composure. For example, they must come up with a new Star Wars character under a tight deadline. Molds crack, latex tears, and nerves fray. “Be careful with this prop!” a woman tells her model, handing her the delicate creation. “It’s made with a lick and a promise!”

The contestants are likable, with the notable exception of a creep named Joe. His character ideas are less fun than disturbing — for example, a cheerleader whose face got horribly burned in a hazing incident. Joe stormed off the set at the end of last week’s season premiere, disqualifying himself. That was a relief for TV viewers, but a concern for citizens at large. If you see a horribly burned cheerleader approaching you on a city sidewalk … run!

Lost Treasure Hunters (9pm Fri, Animal Planet)
In this new series, treasure hunter Sam Speerstra heads off in search of India’s Lost Mine of Golconda. The mine was believed to contain massive diamonds, but that was 500 years ago, and now nobody knows exactly where it is. Legend has it that anyone searching for the forbidden place will fall victim to a curse.

This sounds like the kind of nonsense you occasionally see on cable reality shows, but Lost Treasure Hunters is a cut above. Speerstra is not the usual stagy charlatan posing as a TV treasure hunter. He’s a low-key professional dedicated to scientific methods, and it’s fascinating to watch his team of geologists, miners, and engineers zero in on their target.

If they’re successful in finding the mine, I fear the curse will fall not on them, but on us TV viewers. We’ll surely be subjected to endless, inferior versions of Lost Treasure Hunters, all hoping for a similar score.

Fatal Honeymoon (7pm Sat, Lifetime)
Only six months after the trial wrapped up for so-called Honeymoon Killer Gabe Watson, Lifetime weighs in with a TV movie. (Hey, at least the network waited till the verdict was in; one of its other recent movies convicted Drew Peterson before a trial had even been held.) Fatal Honeymoon is reminiscent of all Lifetime’s true-crime sagas: A sweet blond woman (Amber Clayton) meets a seeming dreamboat (Billy Miller); marries him despite minor-key music creeping up on the soundtrack; and dies mysteriously in a scuba-diving mishap. Then the blonde’s father (Harvey Keitel) takes the investigation into his own hands.

As predictable as it is, Fatal Honeymoon is watchable thanks to solid acting, particularly by Keitel, who must have wandered onto the Lifetime set by taking a wrong turn on his way to a Martin Scorsese production. If nothing else, the movie is yet another reminder never to marry someone if you hear minor-key music playing softly in the background.

Hillbilly Handfishin’ (7pm Sun, Animal Planet)
The reality series’ second season is much like its first. In each episode, Oklahoma fishermen Skipper Bivins and Trent Jackson take a bunch of tourists into lakes and creeks to “noodle” for catfish. Noodling involves pulling the fish out of holes with your feet and hands — and, apparently, a lot of yelling and cursing.

Hollywood Heights (8pm Mon-Fri, Nickelodeon)
Base on a Mexican telenovela, this series follows a teenager (Brittany Underwood from One Life to Live) on her path from shy high school senior to music superstar. Among the huge cast are gorgeous delinquents, would-be supermodels, a good-hearted pop idol, lots of concerned parents, and an eccentric movie mogul played by none other than James Franco.

Franco’s presence suggests that Hollywood Heights is no ordinary Nickelodeon production. Yes, it’s basically a teen soap opera, but one with wit and energy and loads of chemistry among the actors. Unlike the many adult soaps with a showbiz setting — including the recent Smash and L.A. Complex — the series feels no pressure to be edgy and raunchy, and thereby avoids falling flat on its face from the strain. Instead, the tone is amiable, and the characters are the sort you want to keep inviting back into your living room. They’ve worn well over the summer.