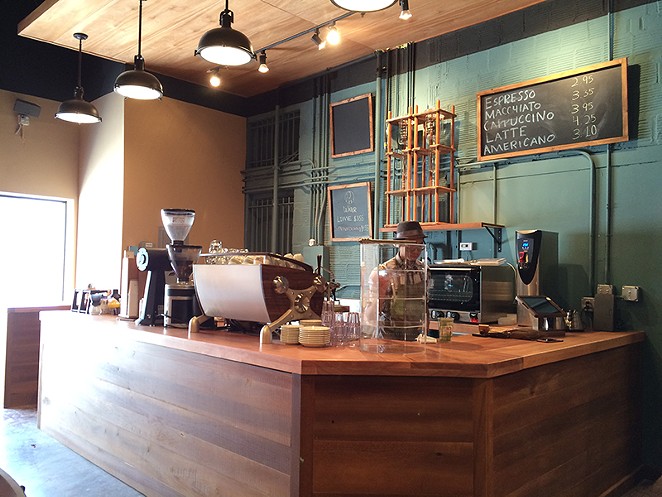 Is Starbucks worried yet? White Elephant Coffee Company has joined the fleet of locally-owned coffee shops in town. The shop, located at 1415 S. Presa, features the usual java drinks, such as cappuccinos, Americanos, lattes and whatnots, along with a few caffeine-free options. Pastries and simple sandwiches are on the way, but owner Jose Carlos De Colina is keeping his focus on roasting great beans in house. White Elephant is open 6 a.m. to 2 p.m. Monday through Friday and 8 a.m. to 3 p.m. Saturdays.

After a long six-month wait, Jason Dady's Shuck Shack (520 E. Grayson) is finally open. I stopped by over the holiday weekend during its soft opening and was pleasantly surprised by the chill, beachside vibe Dady has managed to hone in on — you could just as well be sitting somewhere in Port A without nasty seagulls flocking your plate. The opening menu had a bit of everything — snacks, sandwiches, bowls of chowdah — and of course, oysters from around New England and the Louisiana coast. There's plenty of local brews and a lineup of cocktails (the "Limonade" is especially appealing during the hot summer nights). Parents will be happy to know there's a playground for the kiddos to scamper around while you toss back a few cocktails. Bonus: there's plenty of parking. Opening hours will continue for dinner through Saturday, followed by the launch of Sunday brunch on July 19 from 11 a.m. to 5 p.m. Hours will then switch to 11 a.m. to 10 p.m. Monday-Thursday, 11 a.m. to midnight Friday-Saturday and 11 a.m. to 5 p.m. the following week.

Meanwhile, predecessor Robbie Nowlin who left the hotel in late June, is hosting his first Hot Wells Summer Nights event, a pizza and beer shindig, on Sunday from 6 to 9 p.m. at 5003 S. Presa St. Message Nowlin on Facebook for details or email him at Umlemo@gmail.com. A portion of the night's proceeds will benefit Haven For Hope.

Finally, The Hangar Bar & Grill (8203 Broadway) is hosting two pup-friendly fundraisers this month to benefit San Antonio Pets Alive. Patrons that stop by on Friday and July 24 from 3 to 7 p.m. and donate to SAPA will receive discounts on their bill (depending on donation amount, so $10 gets you a 10 percent discount and so on).