More Stray Dogs Pervade Some SA Neighborhoods Than Others

It was 5 p.m. on a Saturday in late August, and Father Jim Hynes was about to begin Mass.

Hynes, a native of Dublin, Ireland, has spent the past 12 years at Our Lady of the Angels Church on the South Side. Eight of every 10 Masses he conducts each week are in Spanish.

Hynes is something of a St. Francis to South Side stray dogs. For the past five years, he's taken them in, cared for them, brought them to the vet and paid their medical fees when he can. Some weeks, people bring him five or six dogs.

"It's almost like an addiction," Hynes told the San Antonio Current. "I don't regret it, but it can be pretty demanding. They run my life in a lot of ways."

When a woman drove to the church that Saturday to drop off a black-and-white Chihuahua mix, Hynes, clad in his vestments, told her he was about to start the service. She said: "I'll wait. I'll sit in the church and leave the dog in the car."

"You can't just leave it in the car," he replied. Running late, Hynes carried the dog inside the church. He later called Animal Care Services to come treat the dog, which showed signs of illness.

Hynes would adopt the dog, and all the others brought to him, if he could. But despite the efforts of Good Samaritans like him and others, stray dogs still swarm much of San Antonio. No area is completely spared, though strays are rarer on the North Side than in other parts of the city.

Dogs and humans both suffer. Although the rate of reported dog attacks in San Antonio has dropped in recent years, the threat still looms for bikers, walkers and children on their way to school. Diseases are common amongst street dogs – some which can be transmitted to humans.

But for a problem that's so prevalent, basic questions persist. The unknowns – including how many dogs roam the streets, why they disproportionately plague San Antonio compared to other cities and why they concentrate in certain neighborhoods – are many.

Even calling most of them "strays" may be a misnomer, according to Lisa Norwood, an ACS spokeswoman. Most of the dogs the agency encounters have homes, but their owners are either inattentive or intentionally let their animals wander freely. 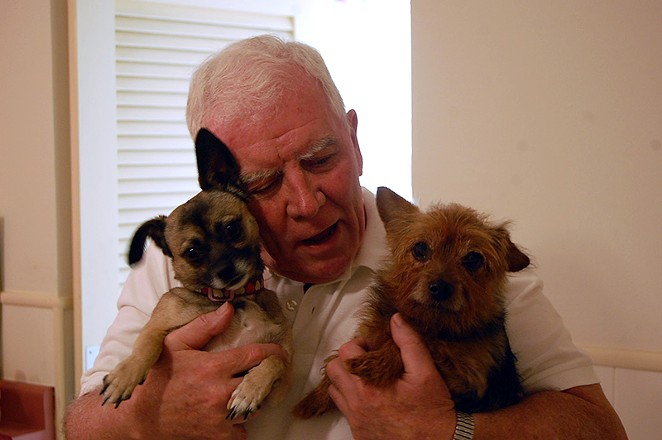 Hynes typically takes the dogs to Dodd Animal Hospital on the East Side. It too has become a repository for strays and unwanted pups, according to Sharon Gregory, the clinic's office manager for 16 years.

"On a daily basis we get dogs tied to our gate. We have boxes of puppies or kittens dumped here," Gregory said.

From Gregory's point of view, the problem of strays roaming the neighborhood hasn't improved, even as the city has more than doubled ACS' budget over the past 10 years.

"When you drive down Rigsby Avenue, the same 11 dogs are roaming around that were there six or seven years ago," she said.

Gregory lives in Olmos Park, but works on the East Side. She said the disparity between the quantity of strays in the neighborhoods is striking. She regularly sees people walking around with "baseball bats or other weapons" near the clinic to ward off potentially aggressive dogs.

To her, the problem seems to have been ignored in that part of town. Not so in her home North Side neighborhood, though.

"When somebody in my zip code calls and complains about a dog, more attention is paid," Gregory said. "I think that people on my side of town have more influence. I think that I have neighbors who know people ... and when they call, people listen. I don't think that's the case [on the East Side]."

District 5, which encompasses portions of the South and West Sides, reported 2,279 dog attacks between 2010 and August 2015, more than any other district. District 8, which stretches northwest from beyond Loop 410 towards Boerne, reported the fewest over that period with 1,104 attacks, according ACS.

Norwood chalked the differences up to a lack of pet-related support in certain parts of town, likening the problem to food deserts.

"In many cases ... it comes down to resources. There are some parts of our community that have more pet clinics, more pet stores, more spay/neuter clinics than others. When you have closer proximity to those resources, it's easier to take advantage," Norwood said.

Others, such as former Bexar County Commissioner Tommy Adkisson, see the dog disparity as a deep-seated issue that's essentially rooted in race and class.

Adkisson, a San Antonio native, is particularly passionate about San Antonio strays. He's seen them gradually overwhelm working-class neighborhoods since his time going up and down city streets as a San Antonio Light paperboy.

"The solution isn't simple. But it requires lots of love, lots of concern and lots of selflessness in being willing to share yourself with many of these communities that maybe were not quite as blessed as you," Adkisson said. "Certain communities get attention and certain ones don't."

Adkisson is forming a political action committee to raise money and increase the issue's profile with city leaders. He hopes that they will make a greater commitment to getting dogs off the streets.

A variety of proactive programs are available from ACS for little or no charge, including spaying and neutering, microchipping and vaccinations. Many of those are specifically targeted toward zip codes with acute stray dog problems.

With so many programs at pet owners' disposal, Norwood chalked animal neglect or letting a dog roam freely up to irresponsible owners.

The agency receives about 250 calls for service per day and about 20 of its 130 staffers are in the field at any time, according to Vincent Medley, the agency's assistant director. Between 10 and 15 percent of the calls are generated by ACS staff.

Medley explained that ACS' response system is similar to triage used by most law enforcement. Calls are prioritized by their urgency; a dog without a collar wandering a neighborhood probably won't get a prompt response, as opposed to a call of an attack.

The result is that many of those who call ACS can expect wait times of several hours. Or they're told to trap the animal while they wait.

"I don't know that solely throwing enforcement at the situation is the sole solution. While that may be helpful, I think that targeted, focused education ... is the way going forward. Giving people tools to do the right thing," Norwood said.

Most everyone involved with the issue agrees that more aggressive educational efforts are imperative and that ACS has taken some valuable steps in that direction. But some, including Hynes, say they've yet to see greater awareness make an impact in their neighborhoods.

"I haven't seen any real difference," Hynes said. "The response of people is very positive, but I can't say if there's really much of a change ... although I've been doing this for the last five years, and I'm still trying to figure out the reasons."