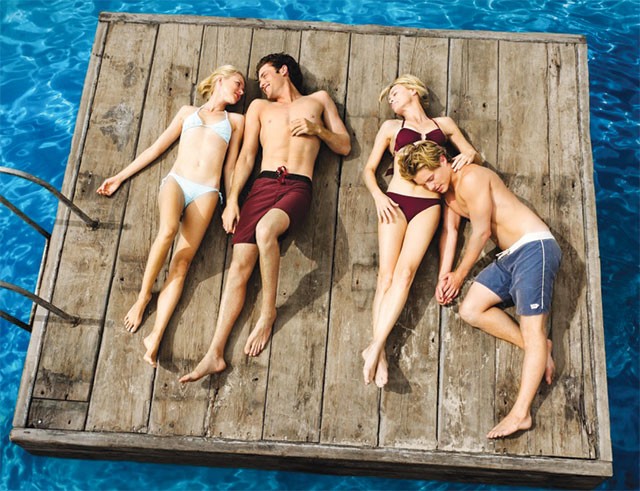 Roz (Robin Wright) and Lil (Naomi Watts) are lifelong best friends who seem to idle away most of their days bikini-clad, wandering back and forth between their adjacent Australian beach houses, sipping white wine and lounging in the sand while admiring the glorious sea, the sun and each other. Lithe, statuesque blondes, they are near-mirror images, whose mutual admiration borders on obsession and which extends to their pair of perfectly tanned and strapping teenage sons, who Roz lovingly remarks “look like young gods” floating majestically atop the foam on their surf boards. One night during this endless summer holiday, Lil’s son Ian (Xavier Samuel) makes a drunken pass at Roz, which she all too eagerly accepts. In retaliation, his best mate Tom (James Frecheville) marches right over and seduces Lil, and the line between cozy togetherness and borderline incestuous pajama party gets uncomfortably, and irrevocably blurred.

Adapted by respected scribe Christopher Hampton from Doris Lessing’s novella The Grandmothers, Adore takes its lurid porno premise and presents it with the dire solemnity of a funeral march. French director Anne Fontaine (Coco Before Channel) has a wonderful sense of composition, with endlessly lovely shots of glistening beaches and inviting, gentle waves. There is a languid pace to the proceedings that adds to the hedonistic vibe, but also leaves too much space to ponder just how self-absorbed and reckless the characters are. The young men can almost be forgiven because both are played as utterly clueless beefcakes. The ladies, however, are too wise to behave so foolishly, and both veteran actresses are too intelligent and adept at their craft to be left hanging in the breeze by the soapy ridiculousness of the plot. Watts, in particular, brings a crazy, seedy intensity to the bedroom scenes.

There is an intriguing undercurrent of Sapphic tension, as if by sleeping with the other’s son these best pals were vicariously expressing their unspoken attraction to each other, but Lil bluntly snorts at the suggestion: “Naw, we’re not lezzos!”

It is laughably crude moments like this one that undermine the quality of the performances and the lushness of the visuals. The whole picture is unassailably beautiful and unforgivably absurd.