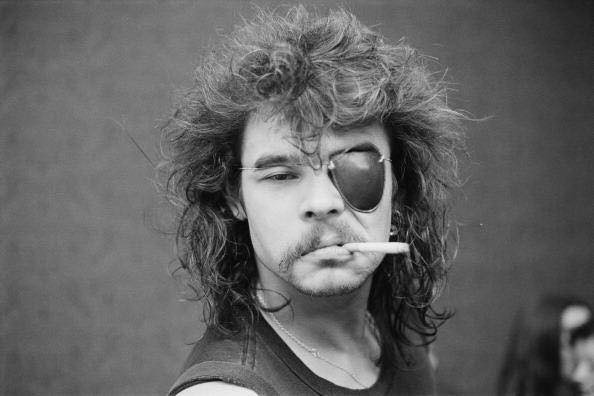 I wouldn't use that headline for just anyone, as it is literally a matter of life or death and some people get all bent out of shape when you try to crack wise about ol' Jim Reaper (like they've never seen Patch Adams and shit), but if you're at all familiar with the madman behind the kit, the beast behind the set, you know there are a lot worse things he's being called right now by folks that really knew him and loved him and that he was a wild, sick son of a bitch.

Here's the deal, jerk. Even if the Al Gore of rock 'n' roll, Dave Grohl, agrees, Motörhead are the baddest, most rock 'n' roll band to ever sell over one million records. This is not an observation, it's not my opinion, it's fact. When you plug in the 'tude, drug-usage (into their AARP years), pant bulges, warts and mutton chops, booze and sex and all the other unnameable shit that makes rock 'n' roll ROCK 'N' FUCKIN' ROLL you arrive at one single conclusion: Motörhead is God. Or, Satan, if you prefer. Leave the bearded, cloud-dwelling, white rule-maker for the Clapton-ites.

Joining the band on their 1975 release On Parole, Taylor went on to record on the monstrous records Motörhead, Overkill, Bomber, Ace of Spades, No Sleep 'til Hammersmith, Iron Fist, Another Perfect Day, Rock 'n' Roll, 1916 and March ör Die. If you are unfamiliar with these LPs, here's a handy trick I have devised for choosing the proper place and time for a Motörhead record spin: If you're about to get it on, you can't go wrong with anything from 1975, the band's inception, to 2015. If you're trying to get ripped, wired, zooted, fixed, fucked, high, milked, "loaded forever," or "righteously stoned" then you can't go wrong with anything from 1975 to 2015. Or, if you're just looking to take it easy and groove on some light jammers, just pop on anything by Motörhead between 1975 and 2015.

I can't find anywhere that lists Philthy's cause of death as anything beyond "an illness," but let's assume it was fast women, cheap drugs or some combination of the two. I realize that it becomes somewhat trite to celebrate these demigods of debauchery to the point of flippancy or some cavalier hero-worship, especially upon their passing, but it is not to fuel any sort of foolhardy legacy or perpetuate some teenage wet dream of sex, drugs and rock 'n' roll. I do it because these are truly the things I value and admire in people that live their lives pissing in the wind and shitting in the wherever bad motherfuckers shit, in the toilet, too, I guess...maybe country club tennis courts or pools. We don't all have the disposition, constitution, fortune or connects of being rock' n' roll stars, much less the talent and skill, so when a warrior like Phil Taylor comes along you salute the wild, unabashed hysteria, ability and craft and the unholy matrimony of these traits.

Here's what "Fast" Eddie had to say, "My dear friend and brother passed away last night. He had been ill for sometime but that does not make it any easier when the time finally comes. I have known Phil since he was 21 and he was one hell of a character. Fortunately we made some fantastic music together and I have many many fond memories of our time together. Rest in Peace, Phil!"

Lemmy hasn't stated shit, but he's probably deep into his umpteenth Jack and Coke and ripping a line off of something implanted with silicone. It's better if he doesn't release a statement, anyway. He's Lemmy.

Taylor has been reported as deceased numerous times before, to the point of comedy, so it still could just be a radical hoax but, if it isn't, after losing Allen Toussaint earlier this week, I'm anxious about who the next to bite it will be.