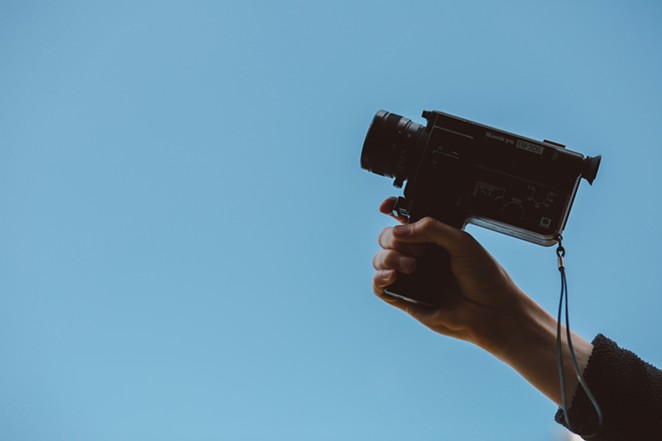 In past iterations of the Current’s Shop Local issue, we’ve offered blockbuster-worthy shopping ideas for folks looking for locally produced gifts for movie lovers. Last year, for example, we recommended movie-themed enamel pins from a host of local makers.

This year, we really don’t want you driving store to store, spreading your germs — or being exposed to others’ — so our recommendation is to shop online at local marketplaces such as Craigslist or the one on Facebook. Apps such as OfferUp or 5Mile also offer a good online shopping experience. Sure, you’ll still have to go pick up your purchase, but a one-on-one encounter is better than a shopping center full of asymptomatic assholes not wearing their masks.

Here’s a collection of movie memorabilia and collectables we found fellow San Antonians selling online. Just search using the seller’s name or the item description and remember to act fast on these one-of-a-kind items. Once they’re gone, they’re gone.

If you know a fan of the 1987 music drama La Bamba, San Antonian Ray Moreno has a collector’s item for you. Moreno is moving to Chicago soon, and he doesn’t want to pack his framed Fender Starcaster signed by actor Lou Diamond Phillips who portrays late rock ’n’ roll musician Ritchie Valens in the biopic. “First $500 takes it,” he says. “My loss.” The guitar comes with an official certification.

Cory Hollett is selling a collection of 18 Star Wars-themed Pez dispensers. The lot comes with characters including Chewbacca, Darth Maul, R2-D2, Princess Leia and Darth Vader. The pieces aren’t in packages, so it doesn’t look like candy is included.

Have you always wanted your very own Hattori Hanzo sword from the Quentin Tarantino film Kill Bill? Were you disappointed when you found out the swordsmith swore a blood oath to never again make another “instrument of death?” Well, if the Crazy 88s are after you, you’ll want to get your hands on this piece of movie memorabilia as soon as possible. The blade is made of high carbon steel and the handle is made of leather and ray skin. As the Bride says, “I need Japanese steel.”

Someone on the North Central side near Loop 1604 is selling vintage necklaces, earrings, key chains and lapel pins from director Steven Spielberg’s 1982 classic E.T. the Extra-Terrestrial. The necklaces include a full-body charm of the title alien. The earrings come in a package printed with an image of E.T. and Elliott, who was played by San Antonio native Henry Thomas.

If you’re an aspiring local filmmaker, Diana Dragonne thinks you should go old-school and purchase her antique Super 8 movie camera from Sears. It comes with its original black, leather case, instruction booklet and lens cap.

Over near Interstate 35 and Judson Road, “Kat” is selling a 6-foot tall cardboard cutout of the movie character Glenda the Good Witch from the 1939 classic The Wizard of Oz. The Yellow Brick Road is under construction this weekend, so you might want to take Wurzbach Parkway to get there to pick it up.

Someone who goes by “King Kobra” is selling a hard copy script of the 1985 fantasy adventure Legend. The script appears to be autographed by cast members including Tim Curry, Mia Sara and Billy Barty. It’s unclear whether the script comes with a certificate of authenticity, so you may want to ask.

Everyone in San Antonio seems to have a friend who swears they were at the Alamodome for the shooting of the concert scene in the 1997 film Selena. In this case, Anna Fuentes has proof that she — or someone she knows — was actually there. She’s selling one of the tickets they gave to people for participation in the “Alamodome Concert Scene,” which doubled as Selena’s last concert at Houston’s Astrodome. The scene was shot Sunday, September 15, 1996, and according to the ticket, comedian Paul Rodriguez also entertained the crowd. Adding to the nostalgia factor, the ticket lets us know that the event was held in cooperation with the long-gone Handy Andy Supermarkets.