Moving on Up: Rosario’s North updates menu and décor 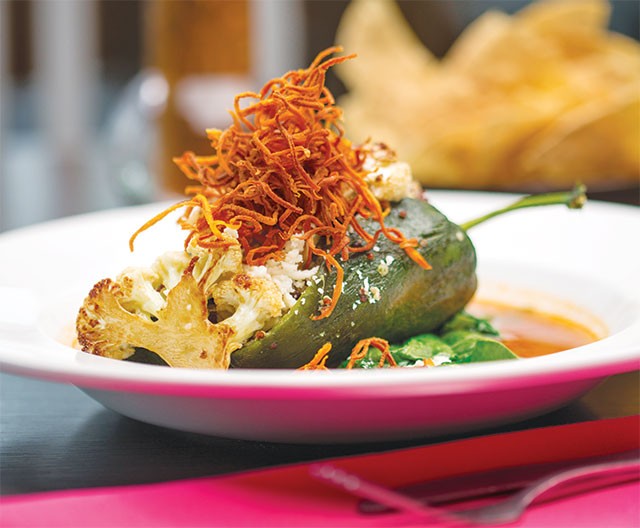 The restaurant formerly known as Barbaresco had all the charm of a pseudo-posh hotel lobby in a Central American banana republic: slick and cold, its best feature (and that’s not saying much) some over-scale realistic paintings. The paintings remain, but they seem at least a little more at home in the re-energized setting that is now known as Rosario’s North, Lisa Wong’s amped-up evocation of her popular Southtown original. We’re told she had help from artist Andy Benavides, and the revised colors and lighting alone make the place worthy of a visit. (Suggestion: clear bulbs in the hecho-en-Mexico light fixtures would make for some interesting shadows.)

The menu at both locations has also been re-energized by executive chef Nancy Fitch, who helped Wong open the first Rosario’s. On my first visit, admittedly not long after the late-March opening, I tried something old and something new—and wasn’t much impressed with either one: The posole was reasonably well-flavored but came with pinche portions of the usual add-ins; the still-experimental masa and chile-crusted sweetbreads were a total bomb. (“We’re working on them,” I was told.) The same, old-versus-new approach was trotted out on the second visit with much different results.

But first this: There have been many complaints about service at the new location, enough that it can’t be a question of just a few whiners. Perhaps the staff had been taken to the woodshed, but my experience was totally the opposite. The wait was less than told (and, having been discouraged by the packed parking lot, a very long wait had been expected), servers arrived promptly—and returned frequently, chips (way too good) were plentiful, the roasted salsa as generous (and addictive) as ever … in short, you won’t get a yelp outta me.

I will choose to whimper a little about the lackluster Mexican hand-shaken margarita, chosen not for its duo of orange liqueurs but for its fresh-squeezed lime juice. And about the fact that the drinks appear on a menu without prices; it’s not like the Great Lime Crisis has made that much day-to-day difference. The Pica Pica, on the other hand, made from the same Hornitos reposado but infused with cucumber and jalapeño, was both original and refreshing. And, FYI, both were $10.95. Can’t say what the specialty drinks will set you back, but most of them seem overwrought anyway.

A new antojito, paquetes de jicama y camaron, was a total hit, the slices of jicama subbing nicely for tortillas, the fried shrimp and fresh red cabbage crunchy, the fried shallots a great, frankly greasy, topping. All the dish needed was a little green in the form of, say, cilantro. Fried garbanzo beans with seasoned salt? Not there yet. But, located under “Nachos y Mas,” the old fave of rajas de chile poblano con crema was as comforting as ever.

Any dish with a title such as quinoa chile relleno announces its intentions upfront: We want to get something vegetarian on the menu and thought a trendy grain might do the trick. A Fitch original, this invention could have been a well-intentioned fracaso. Instead, it might become a new favorite. The nutty grain is a terrific meat substitute, the cinnamon-spiked sauce a beautiful complement, the spinach and cauliflower topping much more than an afterthought. A little more thought would make the parilla de carnitas de puerco the chile’s equal on the meat side of things.

Maybe it’s the curse of the sizzling skillet. Gracias a dios they don’t call these chunks of pork by the name “fajitas.” But they also don’t treat them with the same rough-and-tumble gusto as many local sources. (Hint: the fattier parts are best, naturally.) The accompanying onions and green bell peppers are also a little limp. Fortunately, the platter is served with a generous amount of pretty good guac, so the total package with tortillas, both flour and corn, is fine.

Postres are also unpriced on Rosario’s menu. Just so you know, the nutty bread pudding with cajeta and a blueberry/raspberry compote was $6.95 and worth every centavo. The Mexican vanilla ice cream may have been unremarkable, but everything else clicked—a sound you might actually be able to hear, as RN is (somewhat) less acoustically punishing than its older hermano.