Mrs. Howl thanks fans after a year in SA 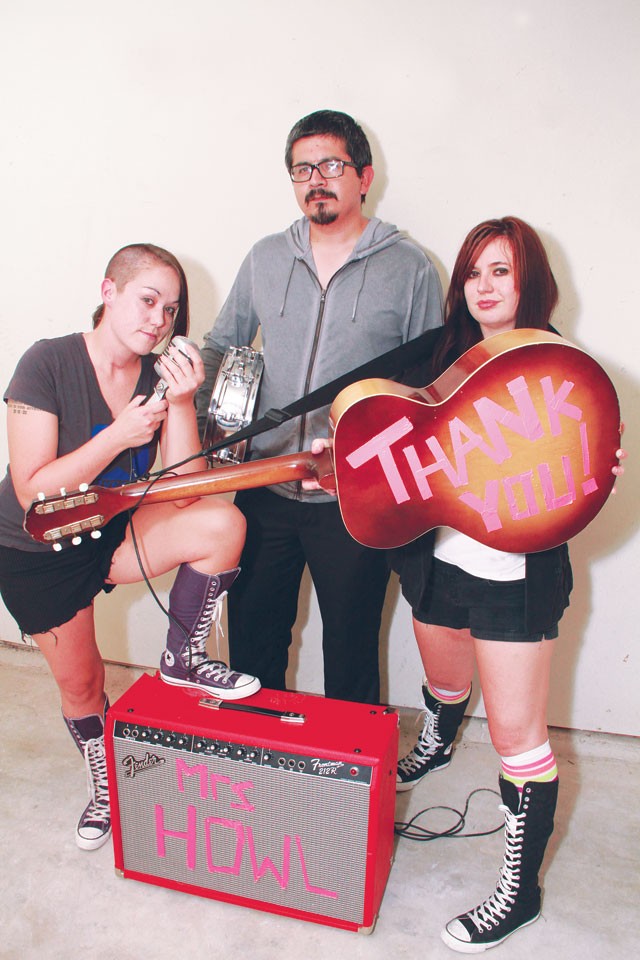 Mrs. Howl is having the time of their lives. Who can blame them? In a little more than a year, the Dallas transplant (Laurel Dagger on guitar, Chelsea Dagger on vocals, and SA's Alfonso Mata on drums) has released Lovie and a Yellow Lamp (co-produced by Girl in a Coma's Nina Díaz and Phonolux's Art Guillermo Jr., who also recorded and mixed), Mrs. Wasteland (an eight-song split CD with Disco Wasteland, credited as "Disco Howl" and produced by Laurel herself*), and fast become one of the most popular bands on the local circuit.

But the best part is what you don't see or hear.

"There's a vibe [in SA] you won't find anywhere else, and we love it," Laurel told the Current. "When Chelsea and I pulled up to our apartment off St. Mary's on moving day, it took less than five minutes for the woman downstairs to call her nephews to come and help us unload our stuff into the second story apartment. And the first night we ventured onto the St. Mary's strip we left with several new friends. Everyone just took us in and welcomed us into their circle of friends, no questions asked." Soon after that, Mrs. Howl's first local show ever, at Rebar, had a packed room thanks to Ledaswan, who helped promote and talked them up to their fans. "Ever since then, it's been nothing but awesome."

So it's time to say thanks, and Laurel took it upon herself to feed everyone this Saturday at the Martini Ranch ("The first bar to ever pay us for a show"). To be exact: between 8 p.m. and 9 p.m., Laurel will serve a Cajun meal and will pay for everyone's beer (Pabst Blue Ribbon). Then, the kitchen closes and the music starts at 9 p.m. with Langton Drive (wait until you hear their self-titled debut album, which is strong even though they didn't include "Ribcage," my favorite song), Ledaswan, Bite Lip Bleed, and Static Mind (an all-girl band from Dallas named after the Girl in a Coma song).

"The fan appreciation party is all about the fans and the musicians who have supported us," said Laurel. "I love to cook, and I figured this would be a great personal way to thank our fans who have been just awesome this last year. It'll be a great jam-packed night."