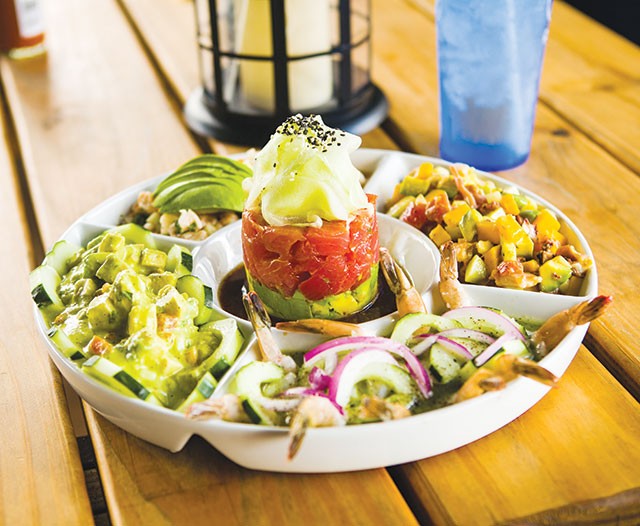 It’s hard not to judge a seafood eatery by its digs, especially one like Muelle 58, which insists on really driving the point of coastal foods through its decor. The experience begins innocuously enough with a few wooden patio chairs lining the sidewalk of this Stone Oak joint. But once inside, the vibe changes drastically. The tall ceilings, the bright cerulean walls, the two faux patios, the indoor picnic tables with opened umbrellas and hundreds of seaside knick-knacks fill the space to the brim. You’ll find plastic fish, all manners of lanterns, nautical knots, nets, lifesaver tubes, buckets (no chum), oars, fishing rods, mini lighthouses and two sandboxes filled with seashells lining both decks.

No, this isn’t Port A, Corpus or SPI. There are, thankfully, no seagulls here, but you will find an even more overwhelming menu at Muelle 58. Yes, you’re going to need a bigger plate.

Created by chef Gaspar Vidanez, the menu is broken down into appetizers, tostadas, soups, enchiladas, ceviches and cocktails (along with a section for sushi-grade “tiraditos”), fish filets, tacos, two entrees for chicken- and beef-eaters and a section for shrimp fans. Here’s where a personal pet peeve of mine comes into play—there are more than 100 items on the menu. I’m not entirely indecisive (actually, far from it) but when met with this multitude of options…well, I tend to second-guess myself.

Of course, I needed to try a ceviche, but that’s where the namesake “58” is derived from. I settled for the Muelle’s green tropical ceviche with calamari, mango, jicama and pineapple, but the ceviche tropical arrived at my table. Considering its only deviation was fish instead of calamari, and bits of jicama and pineapple, I wasn’t entirely heartbroken. The serving is presented in a large martini glass, but it didn’t do much in terms of flavor. Large cubes of fish along with diced mango and avocado made for an enticing and colorful presentation, but the ceviche was oddly dry. A good swirl with my spoon helped liven things up by spreading the citrusy, sweet juice, but not enough to win this diner over.

I soldiered on and tried the michelada shrimp ceviche with lime juice, pico de gallo and michelada sauce. The concept is novel, but the dish, once again presented in a glass goblet, wasn’t as gimmicky as expected. Halfway between a ceviche and a seafood cocktail, the michelada shrimp is briny, with a touch of Clamato. My anxiety over choosing an entrée could have been why I overlooked the arroz marinero, but my partner chose wisely as the dish came loaded with pieces of shrimp, octopus and fish interspersed on a bed of savory rice and served with a creamy chipotle sauce. Learn from my mistakes.

I didn’t pack my swimsuit for my second visit on Labor Day, when the space was filled with chatty families, girlfriends out for lunch and a few couples on dates. The atmosphere was lively as a couple of flat-screens aired a baseball game and the sound system played an excellent mix of Shakira and Maná’s greatest hits.

When it came time to order from the massive menu, I let my lunch partner take the reins. She settled with an octopus “grinds” or chicharrones—fried, well-seasoned and slightly spicy octopus bites kicked off this excursion on a tasty note.

We followed the starter by splitting a shrimp burger and fish ceviche tostada. The latter, served in the style of Mazatlán, with diced carrots, coriander, onions and citrusy fish, was reminiscent of the one found at the late Bahia Azul (inside the Alley on Bitters). The fish is finely chopped and strained so what’s left is packed on top of the baked tostada. Prepare to get messy.

The burger’s patty, made in-house, features some of that same spicy sazón tasted in the octopus starter. There’s a nice char, the fixin’s are fresh and the ciabatta is sweet and springy, which make up for the readymade fries.

If there’s any beach-inspired warning flags at Muelle 58 that may lead to iffy surf conditions, it’s the all-too-laidback staff. While general manager Hector Tamez and his staff were friendly and accommodating at first, they went MIA once our plates were delivered. Maybe they were fighting off seagulls in the back? Regardless, Muelle 58 is worth visiting if you’re willing to wade through all your menu options—just make sure you’ve got a Margaritaville frame of mind.