Mujeres Mercado Brings its ‘Righteous Feminism’ to an Eastside Pop-up 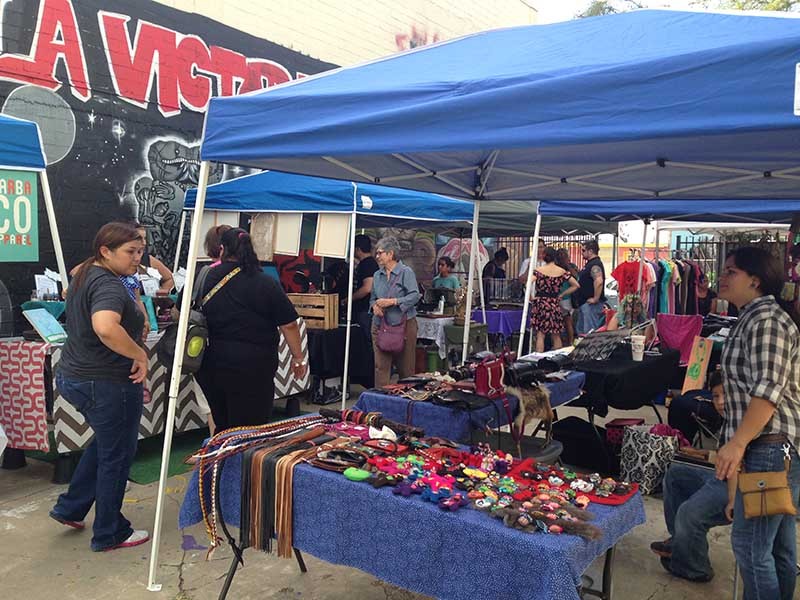 I've asked around, and it turns out I'm not the only one who thinks San Antonio has a special kind of magic when it comes to nurturing the kind of comadre spirit that rounds up creative women in thrilling partnerships and collectives. We nurture a unique female energy here. Over coffee at Barrio Barista, I discuss this feeling with Cristina Martinez and tk karakashian tunchez. They wholeheartedly agree, especially tk, who has traveled all over and comes back to San Antonio because of how our community supports and strengthens its mujeres. San Antonio has its sexism problems, but the community of women who support each other and lift each others' work has always struck me as magical.

Feminist Ann Friedman's shine theory of friendship speaks to me. Rather than feeling intimidated or jealous of the cool, powerful, funny, smart women you meet, make them your friends and we all shine. In a world where women especially are expected to measure ourselves against our peers and generally feel like we come up lacking, linking powerful women is an act of revolution. Cristina and tk radiate the shine all over the Mujeres Mercado, their collaborative art project supported by Southwest Workers Union.

Mujeres Mercado is an all-female, handmade, artisan market. It blends Cristina's visual-art projects, Very That, and tk's jewelry, leather and multimedia work, Las Ofrendas, and brings other women into the magic circle. The Mujeres Mercado began as a collaboration that brought vendors together at different festivals, moved to a monthly market in Main Plaza set against the backdrop of "San Antonio|The Saga" on the San Fernando Cathedral—and opens November 5 as a brick and mortar pop-up project. As it grows it continues to evolve and bring other women into the circle. They carefully curate the artists to be fair to the vendors already sharing their space.

The new Mujeres Mercado project, the Vibrant Community Space, is located at 1414 E Commerce and will feature artists, musicians, studio space, traditional healers and a holistic community of support for the artists in the circle. That includes business coaching to help the artists make a living from their labor. They'll partner with Southwest Workers Union, an active collaborator in the pop-up shop since the first Mujeres Mercado. Cristina and tk share the challenge of demonstrating the value of handmade artisan goods in a big-box world. You would never walk into Target and try to bargain them down, but that's the first thing people do to vendors at an art market. The struggle to not internalize the devaluation the world puts on your products, thoughts and words is real.

Cristina and tk admit that it can be difficult because in the real world, they're essentially competing in a market where it's not easy for a self-supporting artist to pay the rent and the margins are slim. As tk says, "Capitalism is built on the backbone of depleting women," so it's a powerful act to link up together. Cristina admits, "I was real pinche about asking for help. I have a chingona philosophy of doing it myself. It's humbling to ask for help and it's something she's taught me."

I'm drawn to Cristina and tk's vision not just because it's soaked in real beauty and righteous feminism, but because they genuinely seem to blend the best of each other's humor, smarts and passion. They get both pieces: You'll find the organization of the white boards and calendars and financial struggle, but they also listen to each other's critiques and ideas, gaining inspiration by being in the same spaces. Spend any time in conversation with them, and you'll hear the word "organic" over and over. They talk about meeting for the first time and getting instant friend crushes (not unlike the feeling I got when I first met them, too), and continuing to bond and evolve in an organic and natural way.

A thousand internet thinkpieces have spilled digital ink over the impact of Beyoncé's embrace of feminism, especially for women of color. Anyone who knows me knows that I'm a Queen Bey evangelist. I'll fight anyone who tells me I can't mix high-level feminist theory with "***Flawless." So let me come clean about why I was originally drawn to Cristina's handmade art tiles: Beyoncé quotes–just one of the many feminist influences you'll find adorning Very That art. And it turns out that's no accident. Cristina and tk call Beyoncé's latest album the soundtrack of their friendship and the Mujeres Mercado. We can wax rhapsodic for long stretches of time about the devaluation of the feminized in society, her mature sexuality and the potential power of her blossoming feminism. Beyoncé is another powerful woman who practices shine theory, hiring an all-female band made up of some of the best musicians in the world. Cristina and tk draw inspiration and power from powerful music made by intense women and they use it to create a vision of a feminist revolution they can dance to. Shine on.