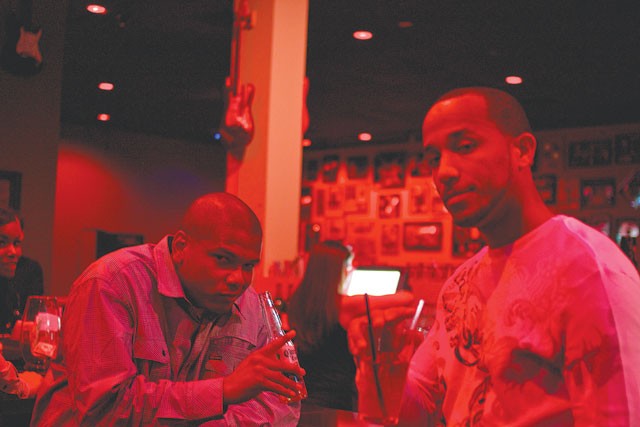 You’ve probably heard about Endless Music’s recent format change. In September, the club (formerly Scout Bar at Hwy 281 and Redland) was acquired by Sugar’s/Perfect 10 Clubs. Since becoming a “gentlemen’s” club (this writer uses the term loosely), the venue has been attacked by some locals for masquerading as something other than a strip venue. Manager John Carrasco said there’s a reason they think that.

In October, Endless hosted Houston rapper Z-Ro and finalists for the Texas You Be the Star karaoke contest. At these events, there were no exotic dancers, just locals enjoying drinks, entertainment, and buffet food. Carrasco said there are enough regular strip clubs in San Antonio. He’s trying to book bands every weekend — including pop metal rockers Drive and country legend Dwight Yoakam — and hold classic burlesque evenings on Wednesdays. The non-special-event days will be when Stone Oak, Bulverde, and Encino residents can kick back a beverage and take in the scenery. In other words, Carrasco wants Endless to be a variety act for everyone.

For now, Endless Music is a standard gentleman’s club, but it’s easily the classiest, best valued in town. It’s well lit and wide open, with an elevated entertainer stage (catering more to bands than dancers). The club reeks of newness, from the sleek, comfy armchairs in front of the stage to the generous love seats in VIP. The facility also sports two bars, two stages, three VIP areas, and several HDTV’s, one of which I estimated was seven-feet huge. Guitars and music paraphernalia (including framed gold records) still adorn the walls, giving Endless a Hard-Rock-gone-hardcore vibe. There is no cover at present.

It was a Thursday night, not particularly crowded, but still well attended when I stepped in. Expectedly, the crowd was predominantly men: mostly youngish, logo-teed working dudes, with some hair-slicked, alligator-shoed internationals. There were also a few suited executives admiring the dancers between gazes at their smart phones, and three couples mingling about. Two ladies told me they were attending a birthday gathering for their friend (not a dancer, but a model).

Meanwhile, the dancers were not only beautiful, but tasteful. When “Jordan” (a Nicki Minaj look-alike) took the stage, it was to dance to classic Janet Jackson (“If”). Similarly, the curvaceous and curly-locked “Erin” writhed to Sting’s 2000 new-age hit “Desert Rose.” Predictably, the abundantly-inked “Chloe” (who had the body of a rollergirl but the face of a teen who stomped you in math club) danced to Drowning Pool and Saliva. The soundtrack was generally not like other clubs. I half-expected a dancer in a schoolgirl outfit to perform to Björk’s “It’s Oh So Quiet.”

Endless Music revealed itself to be a place for vibin’. Some dancers left the stage to rustle up some lap dances, but others visited with friends and had a beer. Waitress Gina-Marie Bridges chatted me up, calling Endless more of an “upscale lounge.”

I agreed. The abundant TVs featured ESPN and a cable broadcast of Hoosiers. It wasn’t deafeningly loud either and dancers weren’t doing hardsells on attendees. Most importantly, there wasn’t the primal sadness of some strip clubs clogging the air. Even if Endless Music doesn’t evolve into the all-audiences variety act it aspires to be, Northsiders at least now have a clean, well-lit place to soak up some suds and sights. •

Best Use A saucy happy hour (free wings from 6-9pm, half-priced drinks every Tuesday) or a relaxed, but stimulating mixer with friends