San Antonio often gets overlooked as a hub for groundbreaking musical activity, at least partially owing to our proximity to Austin, a city that never ceases drawing accolades for its musical import. Nevertheless, SA has, from rock and roll to country, from tejano to pop, from soul to alternative rock stylings, and so much in between, consistently made its own indelible mark on music history and maintained a vibrant, truly unique scene.

Here we have compiled, by way of reaffirming our status as a city of diverse and important musical threads, a list of some of the most iconic musical movers and shakers from throughout our (more or less) recent history.

Our considerations for inclusion on this illustrious list were simple, but strict: these are people that are from here and have gotten famous and have made significant musical contributions, whether breaking new ground or continuing in some great tradition (or both).

The sons of conjunto pioneer Santiago Jiménez Sr., Flaco and Santiago have, in their long and storied careers, both continued their father’s legacy and cut their own unique paths. Those paths have found the two preternaturally gifted accordionists — the former a multiple-Grammy winner (including the Lifetime Achievement Award), the latter a National Medal of the Arts recipient, and both recipients of NEA National Heritage Fellowships — fronting their own bands and lending their talents to projects that celebrate and explore the cultural and musical fusions that happen in SA like nowhere else.

Augie Meyers (born 1940)
Augie Meyers is a Texas icon par excellence, seeming to embody the world-wise and world-weary attitudes of his forebears in Texas outsider music. As a founding member of the Sir Douglas Quintet and the Texas Tornados, as a solo artist, and lending his keyboard/organ skills to a massive host of other artists (including Bob Dylan and Tom Waits), Meyers has cemented his iconic status and (most importantly) created his own gritty, uniquely Texan language with his instrument.

Rudy Tee Gonzales (born 1940)
Rudy Tee Gonzales, known as Rudy Tee and originally performing with his group Rudy & The Reno Bops, brought Westside soul to the masses with the modest hit “Cry, Cry.” He later had a hand in producing the smash hit “96 Tears,” by Question Mark and the Mysterians. His mastery of the classic rock and soul approach has left such a legacy that he’s recently been coaxed out of retirement and is performing can’t-miss shows with local surf-rock outfit King Pelican.

Jim Cullum Jr. (born 1941)
Jim Cullum Jr., a man with jazz in his blood, whose father made his contributions to jazz music via the Happy Jazz Band, has led the Jim Cullum Jazz Band for more than 50 years. Cullum and company have helped keep San Antonio’s jazz scene on the map, playing such prestigious venues as Carnegie Hall and the Kennedy Center, even working for years on the faculty at the Stanford University Jazz Workshop. This renowned cornetist should make every SA jazz fan proud.

Sunny Ozuna, especially with his bands Sunny and the Sunglows and Sunny and the Sunliners, has made, and continues to accentuate, his mark on San Antonio’s musical spirit through his earthy and glorious Chicano soul/rustic R&B tunes. With a doo-wop swagger and a devastatingly charismatic presence, Ozuna, who enjoys regional adoration, is yet another entry on this list who reminds us that the roots of SA music, and by extension its lasting legacy, include soul and R&B right alongside some of the genres that might come more readily to mind.

Doug Sahm (1941-1999)
Doug Sahm was the roots-rockin’ dreamer and consummate individualist behind two of San Antonio’s most important, memorable, and representative acts: the Sir Douglas Quintet and the Texas Tornados (with Freddy Fender, Flaco Jiménez and Augie Myers). A personal favorite of Bob Dylan’s, a South Texas Music Walk of Fame honoree and a champion of the Tex-Mex sound, Sahm left behind timeless music that transcends genre and cultural boundaries.

Eva Ybarra (born 1945)
Eva Ybarra, the singer, bandleader, accordion wiz, and conjunto legend often hailed as La Reina del Acordeón, was awarded a National Heritage Fellowship in 2017 for her contributions to the musical legacy of South Texas. As really the only widely recognized female conjunto accordionist and bandleader, Ybarra is a true trailblazer, bringing a fiery passion to her playing, writing and singing, all the while making technical genius at her instrument look exasperatingly natural.

Steve Earle (born 1955)
While Steve Earle, an outlaw country stalwart and acolyte of the heady 1970s scene that saw Willie, Waylon, Townes and Jerry Jeff take that style of music to the masses, wasn’t born in San Antonio, we claim him because he did primarily grow up here. A gifted songwriter in the country/roots-rock tradition, Earle has followed in the footsteps of his high-ridin’ heroes, writing in an honest if poetic style about life, releasing more than 15 studio albums and collaborations, pressing his fans to develop social awareness, and devoutly championing the work of those who came before him.

The Royal Jesters, one of San Antonio’s undersung gems, was one of the most important groups in the Westside soul scene of the 1960s and 1970s. With their own style, the perfect fusion of early rock and roll and soul, the Jesters charmed audiences and made being a sentimental cat seem like the hippest thing a guy could do. Check out the compilation Royal Jesters: English Oldies, out on Numero Group, and you’ll hear exactly why no list like this would be complete without this band.
Emilio Navaira (1962-2016)
When you’re known the world over simply by your first name, like Emilio is, you know your legend status is cemented. Emilio the heartbreaker, Emilio the crooner with an ear for the key of sadness, Emilio (arguably) the tejano world’s biggest star (save Selena, whom we’d love to claim, but can’t), Emilio the hit factory didn’t so much invent the tejano template as perfect it. And, we’re damn proud to say the Grammy winner and straight-up national treasure is one of our own.

Bubble Puppy (formed 1966)
While San Antonio was certainly a hub for psychedelic rock in its first and second waves, and the Sir Douglas Quintet gets lumped into that category to some extent, Bubble Puppy is the only proper, deep-dish psych-rock band from here that ever made serious national waves. Those waves were brief, though the crew has recently started gigging again, and centered around the band’s lone album, 1969’s A Gathering of Promises, and its hit single “Hot Smoke & Sasafrass.”

Patricia Vonne (born 1969)
The sister of another famous San Antonian, director Robert Rodriguez, Patricia Vonne has left her mark on San Antonio’s musical heritage and become a worldwide star. Taking influence as much from her ancestral Spain as from the pop, rock, folk and regional styles (like tejano, Tex-Mex, conjunto, mariachi and more) she grew up surrounded by, Vonne isn’t one to play it safe or stick to a single formula. Her latest album, our favorite yet, is 2015’s Viva Bandolera.

Pat Green (born 1972)
One of the true contemporary stars in Texas country, Pat Green is from a generation of country artists that seemingly takes its cues more from Hank Williams Jr. than his legendary father. Green earned his cred in beer halls and honky-tonks, and released music to largely regional acclaim, before becoming a bonafide Nashville-approved star with his 2003 breakout hit “Wave on Wave.” Green splits the difference in his music between country balladry and, what he’s probably best at and most beloved for, party country.

Chrysta Bell, a multifaceted artist and international woman of mystery, has had major success as a singer-songwriter, an actor and a model. Her debut album, 2011’s This Train, as well as a follow-up EP, 2016’s Somewhere in the Nowhere, were both co-written and produced by visionary director, zen madman, and all-arts dabbler David Lynch. Yes, that David Lynch. Bell is, at present, a favorite collaborator of Lynch’s, having also netted a key role in the long-awaited sequel to his TV masterpiece Twin Peaks, 2017’s spellbinding Twin Peaks: The Return.

Butthole Surfers (formed 1981)
Long before the band produced its only hit “Pepper,” on its seventh album, Butthole Surfers was the strange, escapist dream of Trinity University students Gibby Haynes and Paul Leary. Rooted in the absurd extremities of punk rock and experimental music, Butthole Surfers’ wild, schizophrenic music and unpredictable live shows have consistently pushed the envelope and won the act a cult following. The band hasn’t released an album since 2001’s widely disparaged Weird Revolution, but Butthole devotees may have new material to look forward to as early as this summer.

Girl in a Coma (formed early 2000s)
In its earliest days, playing house shows and later familiar venues around town, Girl in a Coma — the powerhouse pop-punk/alt-rock trio of Nina Diaz, Phanie Diaz and Jenn Alva — won San Antonio’s heart, and it retains a tight grip. But, over the years, remaining true to its own vision of cathartic rock, the band has also garnered national acclaim from the likes of NPR, Spin, Rolling Stone, Dave Navarro and Joan Jett (whose label the band is on) just to name a few. Plus, GIAC spawned the noteworthy side-project Fea, which finds Phanie and Jenn exploring their riot grrrl/Chicana punk roots. 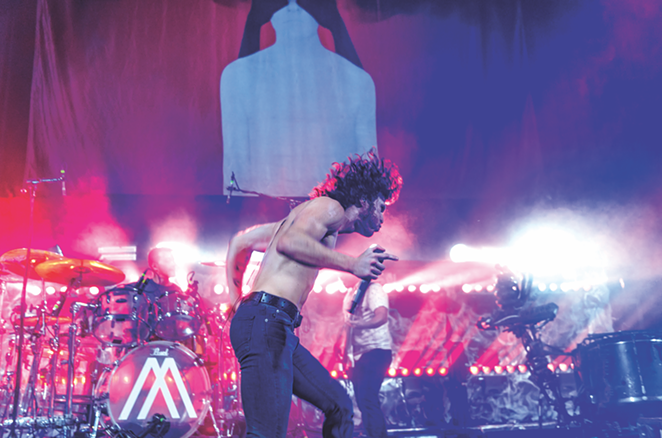 Nothing More are San Antone to the bone. But, like, 99.5 KISS San Antonio, not Flaco San Antonio. You dig? The young, musically ambitious alternative rock band that started out with humble gigs at Jack’s Patio Bar and the White Rabbit (R.I.P.) has been steady and workman-like in its approach to music over the past 15 years. And, with last year’s The Stories We Tell Ourselves, it finally paid off — big time. The group made us proud and earned its spot on this list with three Grammy nominations (including Best Rock Album and Best Rock Song) for the album.