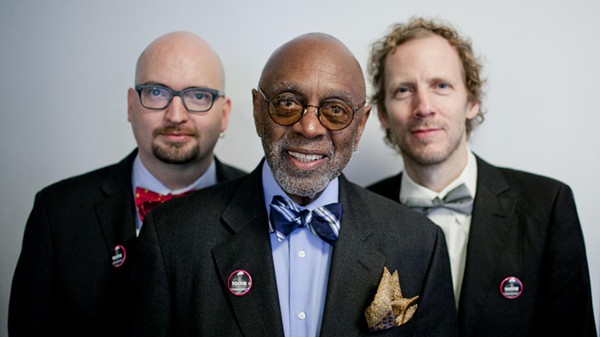 Albert "Tootie" Heath tells such vivid stories in his drum playing that a spoiler alert should be required to discuss his solos in print. His is a melodic style, using the toms and snare to communicate with the band, calling back to a horn player's phrases like a mockingbird to its source.

A native of Philadelphia, Tootie entered the national circuit on John Coltrane's Prestige Records début in 1957. On tunes like "Straight Street," the 22-year-old Heath is an unshakeable timekeeper, shifting from light punctuation to an Afro-Cuban shuffle and a classic pocket ride.

Now 80, Heath has maintained a reputation as one of the top sidemen in jazz. In his long career, Tootie has played with jazz masters including Sonny Rollins, Herbie Hancock, Anthony Braxton and his own brothers, Jimmy (sax) and Percy (bass).

"It was happening so fast I didn't even realize what I was even involved in, Heath told the San Antonio Current. "This is one of those things about being in New York — you can get a call at anytime from anybody."

Heath's new record, Philadelphia Beat, finds him exploring his native city's extraordinary jazz tradition. In the 1950s, the City of Brotherly Love produced players like Coltrane, Lee Morgan, McCoy Tyner, the Heath brothers and many more names that would make jazz nerds salivate. Even more remarkable, the Heath household served as a conduit for many of the touring greats. With Jimmy's big band practicing in the kitchen, touring legends like Dizzy Gillespie and Miles Davis stopped in to see what was cooking at the Heath residence in South Philly.

Philadelphia Beat is the second effort from Tootie's trio with pianist Ethan Iverson and bassist Ben Street. Iverson, one of the great bass clef players of the instrument, steals the show with low register chromatic runs on Gloria Gaynor's "I Will Survive."

"It was easy to play with Ethan and Ben because they gave me the space to be as creative as I possibly could," said Heath. "They basically based this trio around me. That's why I think it's a special recording, based on some of my previous recordings, when I didn't feel like I had that power of being a leader."

For his Musical Bridges gig in San Antonio, Tootie is joined by local saxes Rene Saenz and Richard Oppenheim. It's a rare trio that combines two saxes with a drummer. But it should make for an ideal setting to hear Tootie stretch out as the only member of the rhythm section, telling the story of bop and brotherly love.