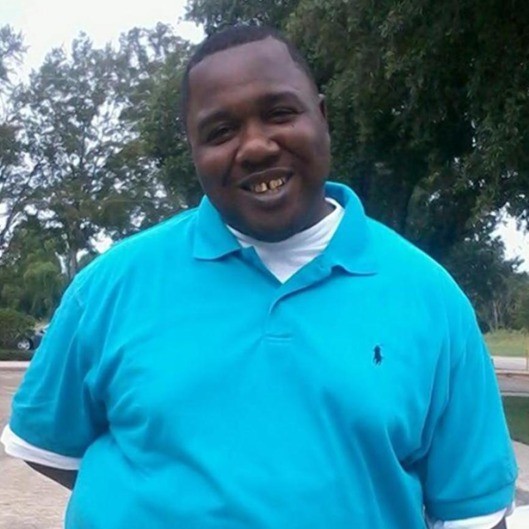 Yesterday, video emerged from two fatal police shootings of black men, igniting protests and outrage throughout the country. In Baton Rouge, Louisiana police shot 37-year-old Alton Sterling point blank outside a convenience store where he sold CDs (it has yet to be confirmed whether Sterling had a handgun in his pocket at the time). In Falcon Heights, Minnesota, police shot unarmed 32-year-old Philando Castile at a traffic stop. "Please, officer, don't tell me that you just did this to him," said Lavish Reynolds, who recorded the aftermath of the shooting from the car's passenger seat. "You shot four bullets into him, sir. He was just getting his license, his registration, sir."

Some of our keenest and most public minds on race, musicians are responding to the police shootings with sympathy and anger. "Although I am a black young woman I AM #AltonSterling," wrote Janelle Monáe. "Just like Alton I used to sell my CDs outside records, library steps, street corners, etc."

Trey Songz posted a video of a white man resisting arrest by two white officers, noting the difference in police treatment between white and black Americans. "My tears are fresh for #AltonSterling," wrote Vic Mensa. "They burn for those bullets the police ended his life with. But this is not over. We will fight. NOW."

If your black & in the hood the cops are terrifying #differentTERRORISM
Pray4 #AltonSterling & #PhilandoCastile fam pic.twitter.com/UaBsdAlGdt

I won't say all bcuz it's wrong to stereotype all for the actions of a few, but some Police Officers are painting the image of a Black Man as a immediate threat. If you are a Black Man you can potentially be a thug, a killer, or just doing something illegal. More often we are guilty just for being Black. There is suspicion just because you are Aftican American. We are criminals by skin color. And the Police are in this train of thought. Black Man are losing their lives because of this & it's getting worse and spreading to cities all over America. This is the 114th black man killed by Police in 2016. #AltonSterling


White privilege in America. Whomever maybe offended by the topic of racism being real in America is a major part of the problem. All lives matter yes, however all lives aren't the ones being taken without consequence by those who swear to protect. And with so many people attempting to make the case that these murders are justifiable, it must be stated again and again and again! #blacklivesmatter #altonsterling #prayersup #prayersneeded

The eyes don't lie. America u see it! Checks don't write this off. Money ain't enough. Justice for Alton Sterling

Although I am a black young woman I AM #AltonSterling. Just like Alton I used to sell my CDs outside records, library steps, street corners, etc. My first cousin's name is Alton. What happened to Alton just reiterates that WE are not truly free. WE are not safe. WE need protection from hunters who hide behind badges. And until every human being, no matter what race you are, realizes this is also your problem and also your job to protect US from murderers like these officers we will never be free. We will always look at you like the enemy. What happened to Alton happens over and over again around this country. We are tired. Tired of IG ING, tweeting, FBooking "RIP" and posting videos of MURDER and shit not change. What these murderers in uniform did should warrant immediate arrest. It's clear what happened. This man could not even reach a gun if there was one. Video shows that. Someone screams "he has a gun!" and so u kill him? He resisted arrest so that means shoot to KILL HIM?! And you shoot him while he is on the ground 5TIMES?! Any excuse one gives to these cowards with badges will continue to play a part in our extinction. Blood on your hands as well. My heart is mad, heavy, and cries for his family and loved ones . I'm so fucking irate right now but clear minded and moved enough to continue to speak out and help this man and many others seek Justice. #HYTB

Stolen from: @ambertheactivist // trying not to let my anger consume me but damn ... This world is so broken but I have to remember that the only thing I can truly <change> is myself... #savethisburningearth

All we gone do is repost it & type "SMH" over & over again huh ?? Then we gone put #JusticeForAltonSterling & #BlackLivesMatter hashtags on Instagram & pretend that's us taking action huh ??? What happened to the generation of people who stood together, held hands & took to the streets peacefully or violently if it had to come to that & wouldn't move or be detoured from that stance until real results were handed over to us ?!?!? Huh ??? WTF is wrong with us these days that we will sit here & watch a video of yet another innocent man shot & killed in cold blood by police officers in this country ?!?!? WTF is wrong with ME, YOU & everyone else who will watch the video & read this caption & DO NOTHING until it happens again... Then what we gone do ?? The same shit we been doing... Hashtag #JUSTICEFOR[insert name here__________] & #BLACKLIVESMATTER when it really seems that they don't at all... & if #BLACKLIVES don't even matter to #BLACKPEOPLE why the fuck would they matter to anyone else ?!?!?!? What on earth is wrong with US ?!?!?!? But lemme stop so we can get back to turning up, dab'n & hittin "them folks" while this man lay dead in a county morgue for selling some fucking CD's & asking what he was being detained for ?!!?!?!?!? NAW, fuck this....... WE AINT HAVIN THIS SHIT NO MORE !!!!!!!!!!! #THETIMETOFIGHTBACKISNOW !!!!! #MartinLutherKing got shot on a fuckin balcony because he wasn't scared to stand up for our parents, grandparents & US.... The reason our black asses can even do 1/2 the shit we do is because that man sacrificed his life along with many others so we could..... & we ain't even got enough heart to stand together as a RACE & pay them back !!!! #IMNOTSCARED #FAKECARINGASSGENERATION #WHOELSEOUTTHEREGONEFAKECARE ??? #WEAINTGONEDOSHITBUTREPOSTANDHASHTAG #SCARYASSRACE #AMERICAREMOVED

I'm so proud to see my 15 yr old son post this. Let's me know he's still listening even when I think he isn't. Even HE CAN SEE how crooked & slimy this system of injustice is towards OUR BLACK MEN. I'm tired of asking America for shit the Constitution says that we have a right to,& Beyond that,we have a God given right to...Basic treatment of decency,respect,equality,& justice. I'm disgusted not only at America and how they treat us but also at myself & my people at the lack of action being taken against our oppressors. It's not time to hashtag & repost,it's time to unify,mobilize & initiate strategies to end the War that has been declared on US by the powers that be in this country. The very authorities & public servants that were appointed to protect US are being used to exterminate US. My prayers & condolences go out to the family of #AltonSterling🙏🏽 You guys deserve so much more than any amount of conciliation you're being offered. You deserve the father,the husband,& the loved one u had & that was taken from you by some cold blooded murderers shielded by a badge & a uniform. #JusticeforAltonSterling #AmerikkkaAintShit #TheyNeverGaveAFuckAboutUS


My tears are fresh for #AltonSterling. They burn for those bullets the police ended his life with. But this is not over. We will fight. NOW.

If your black & in the hood the cops are terrifying #differentTERRORISM
Pray4 #AltonSterling & #PhilandoCastile fam pic.twitter.com/UaBsdAlGdt