Student Arrested After Officials Mistook His Clock For Bomb, Now He Has Invitation To White House 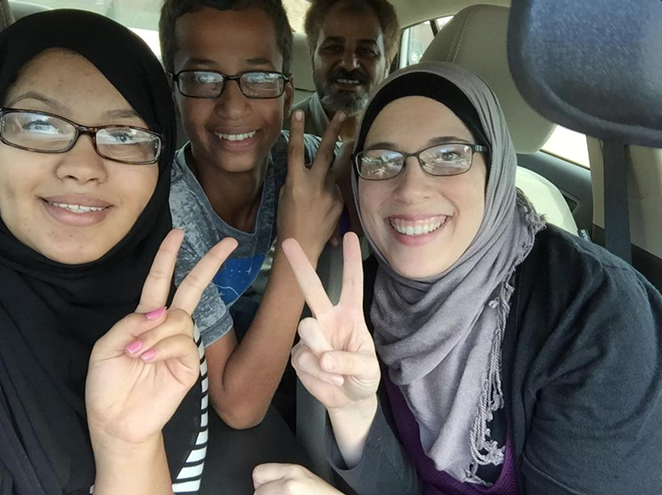 Ahmed Mohamed, a 14-year-old student at MacArthur High School in Irving, Texas, is smart enough to engineer a homemade clock. But when he brought the clock to school on Monday, school officials were dumb enough to think it was a bomb.

Yet despite his repeated protestations that his clock was just a clock, Mohamed, who is Muslim, was handcuffed and taken to juvenile detention, where his mugshot was taken and he was fingerprinted. The student was finally released when his parents arrived.

Ahmed's sister told me to post this. Yes this situation is real for those questioning. pic.twitter.com/Oxd0JxUS6O

According the the Dallas Morning News, Mohamed's engineering teacher praised his ingenuity but suggested he shouldn't show the device to any other teachers. Police were considering charging the student for bringing a "hoax bomb" to school, but during a press conference Wednesday morning, Irving Police Chief Larry Boyd said no charges would be filed. He described Moahmed's decision to bring the clock to school as a "naive accident" and added race and religion did not play a factor in the minor's arrest.

The incident sparked a massive amount of public outcry on social media, where the broad consensus is the student's Muslim background is why the situation escalated to his detainment. Currently, #IStandWithAhmed is the top trending hashtag on Twitter. Even Hillary Clinton stepped into the fray, encouraging Mohamed to not give up on his curiosity. President Barack Obama has even invited him to the White House.

Cool clock, Ahmed. Want to bring it to the White House? We should inspire more kids like you to like science. It's what makes America great.

Mohamed and his family set up a Twitter account Wednesday to thank the public for its overwhelming support. A tweet published Wednesday morning indicated that his family was seeking the advice of legal counsel and may sue the Irving Independent School District for the arrest.

Thank you fellow supporters. We can ban together to stop this racial inequality and prevent this from happening again pic.twitter.com/fBlmckoafU

Going to meet my lawyer. pic.twitter.com/YCxOOeOz3Z


The district sent a letter to parents addressing the incident on Tuesday.

"We are pleased to report that after the police department's assessment, the item discovered at school did not pose a threat the your child's safety," district superintendent Dan Cummings wrote, adding, "This is a good time to remind your child how important it is to immediately report any suspicious items and/or suspicious behavior they observe to any school employee so we can address it right away."

Vox wrote the statement "is infuriating to read for its tone-deafness," because the district admits no fault on the part of the school. But given that Mohamed's family may bring legal action, it is clear that the district is taking a cautious approach in its public statements.