My Life With the Thrill Kill Kult: Electro-trash pioneers 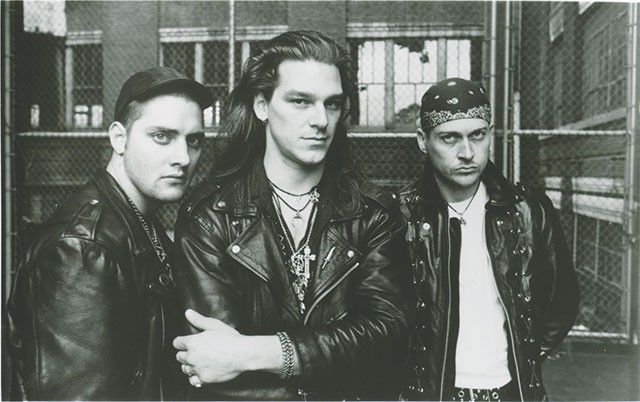 “To me, bad taste is what entertainment is all about. If someone vomits while watching one of my films, it’s like getting a standing ovation. But one must remember that there is such a thing as good bad taste and bad bad taste.” —John Waters

“Up till then, the music had been kind of based on the blues and slavery, and we thought it was time to update it to at least Victorian times—you know, the Industrial Revolution.” —Genesis P-Orridge of Throbbing Gristle

Add the intentional, dayglo bad taste of director John Waters to the innovative industrial music of Throbbing Gristle, sprinkle in a healthy dose of occult imagery and voilà—it’s the industrial dance of My Life With the Thrill Kill Kult. In fact, a camp art film was the intended target of band members Groovie Mann and Buzz McCoy when the project began in Chicago in 1987. The Thrill Kill Kult Super-8 failed to gain traction, but Mann and McCoy took the three tunes they had for the soundtrack, put them out on Chicago’s iconic Wax Trax label “and the rest is herstory,” as Groovie Mann (pictured above, center, in band photo circa 1990) told the Current.

Through their 25-year career, it’s been hard to pin down the sound of My Life with the Thrill Kill Kult. The industrialists shift comfortably between new wave, Deee-lite pop and brooding dance music, keeping heads confused but nodding through the mire. Like all industrial work, samples of “non-musical” sounds are vital to each track, with Mann and McCoy cutting harsh vocal loops until they’re untraceable new instruments. Mann likes to think of it as “creating with tapes and clips of things sewn together into this Frankenstein called Thrill Kill Kult. We fell together into this pact with our madness and pent-up ideas.”

Thrill Kill Kult samples build on each other like rainclouds until reaching a critical mass, releasing a dopamine downpour and pounding rhythm on the fours. The samples feel unforced, found and mixed rather than meticulously pored over. “They show up,” said Mann. “Or as I used to say: ‘They find us.’ Sometimes they magically appear. Looking too much for them sounds too obvious a lot of times ... Too noticeable.”

And too much thought would ruin the party. Part of Thrill Kill Kult’s immediate draw is the camp and candy of “A Daisy Chain 4 Satan” and “Kooler than Jesus,” tossed over blown-out Orchestra Hit settings on old Yamahas. The occult and perennially loaded images that occupy Thrill Kill Kult’s tunes are rude for rudeness’ sake, trying to get dancers to spit back sequin-studded satanic slogans while busting a groove. It’s good bad taste at its best.