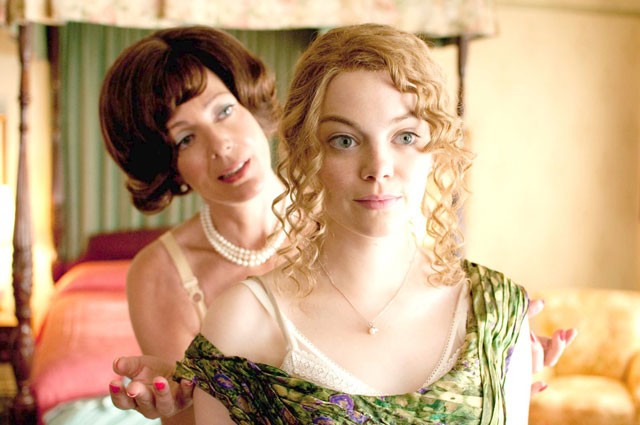 Not since the late Isabel Sanford put a shirtless Sidney Poitier in his place in the 1967 Academy Award-winning film Guess Who’s Coming to Dinner has a maid had so much to say than the domesticated ladies of The Help, a moving and somewhat frustrating dramedy set in the midst of the simmering ’60s Civil Rights Era.

Adapted from Kathryn Stockett’s 2009 bestselling and controversial novel of the same name, The Help is set in Jackson, Miss., at the height of segregation during which many African-American women would make their living working as maids for the well-to-do white families of the town by cleaning their homes, cooking their meals, and raising their babies. It’s a bold, but short-sighted perspective given to director/screenwriter Tate Taylor by Stockett, who herself was raised by her family’s black housekeeper as a child during the same era.

As personal of a narrative as it may be for Stockett, Taylor doesn’t let any of the deep-seated emotion become unmanageable on screen. Like the novel, Taylor frames the film into three distinct perspectives and allows each of these characters to define themselves as their own strong-spirited women. It is these multidimensional personalities, emphasized with audaciousness and a much-needed sense of humor, that elevate The Help beyond the standard race-relations story.

Emma Stone (Crazy, Stupid, Love) plays Eugenia “Skeeter” Phelan, an independent college graduate with aspirations to become a journalist who writes about real issues. She finds her muse in her friend’s kindhearted maid Aibileen Clark (Viola Davis), who she chooses to feature in an in-depth piece about the lives of “the help” in Jackson. Although initially scared about the ramifications of the anonymous writing project if anyone were to find out, other maids, including Aibileen’s outspoken best friend Minny Jackson (Octavia Spencer), join in during storytime as Skeeter anthologizes their personal experiences working for employers who won’t even allow them to use the indoor bathroom. Cruelty is personified in town socialite Hilly Holbrook (Bryce Dallas Howard), a devil in a sundress whose position as President of the Junior League gives her a podium to spout off hate speech and peddle racist policies.

With very little insight given about the changing social structure outside of Jackson, it’s difficult to get the full dynamic of the injustices taking place. At times, the gap between social classes seems like it will cave in at any moment. But there are also scenes in the film that share the same type of tension amongst the queen bees as in Mean Girls. Taylor also dodges issues that would’ve served him better to take head on with more self-confidence. Why is Skeeter’s exploitation of these maids only skimmed over? It almost feels like she is doing them a favor by putting them in harm’s way.

Still, the performances prevail in The Help as Stone shows her range as a serious actress and Davis epitomizes courage through her somber eyes. Who needs delicate Southern charm when you have this much passion surging through your veins?