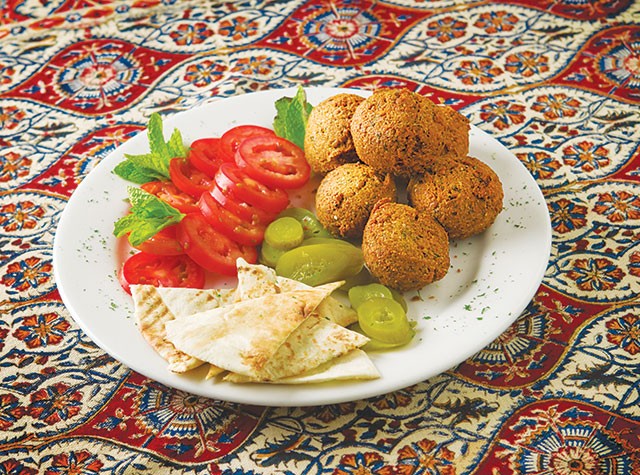 “Next time you have to have the pizza,” she said. “It’s really good.”

Say what? We had just finished lunch on the patio at Naara Café, one of several Middle Eastern enterprises in the quasi-compound on Wurzbach that includes Pasha Mediterranean Grill and Ali Baba International Food Market. A pleasant fountain burbled away, echoing some diners having their bubbly, midday hookah hit. The setting didn’t suggest pizza in the least, not even after an exquisite appetizer of another oven-baked disc of dough, manakish zaatar.

Manakish, by a number of alternate spellings, is popular throughout the Arab (and Persian) world, and zaatar is that world’s quintessential spice mixture, consisting of variations on a basic theme of sour sumac, sesame seeds and thyme. The thinly rolled flatbread and spice topping come together here with chopped tomatoes and feta, and it’s what some of us wish pizza could always be: crisp, savory and not weighted down with toppings. It’s delicacy made the house-made hummus seem heavy on the chickpea, in contrast.

If the hummus came across as ordinary on its own, it was a perfect complement to a falafel wrap. Fierce rivalries, though not compared to current conflicts, have been known to erupt over the Mediterranean/Red Sea culture that makes the best version of this fried street treat of ground fava bean, wheat and chickpea. (Composition can vary as well.) Without getting into a brawl over it, these flattened patties, nestled in a crisp flatbread that evoked the manakish, were perhaps the best I’ve had in San Antonio.

As suggested by the inclusion of pizza, Naara does sometimes stray beyond strict cultural confines. The fat and forgettable fries served with some plates can be safely ignored. There’s a “Greek” burger (though it’s halal), and an especially good cucumber and yogurt tzatziki is served with several plates, including the sliced beef gyro wrap—good but not a standout.

Culture is also in the air at Naara by night when the display of hookahs, arrayed like so many over-styled sporting trophies, seems especially apparent and the patio is packed with groups of folks puffing pipes. Fans of the hubbly-bubbly may be thrilled by flavors such as Fuzzy Navel and Queen of Sex, but we were more in the mood for noshing on the likes of the samboose roll.

Forget the “roll” part: samboose is a Middle Eastern translation of the Indian samosa, and comes in the same, triangular wrapper. The crisply fried packets (both beef and vegetable are available) are served with the tzatziki and an unnecessary chili sauce, and though we could have used more assertive spicing, the eggplant, onion and parsley vegetable filling was otherwise fully satisfying. Moving on, the star of a lamb shish kebab plate was, appropriately, the nicely charred, tender, marinated meat, but though the accompanying rice is classic, the salad is sabotaged by a bottled dressing. Here’s a suggestion: have the lamb instead in the much cheaper kebab wrap with hummus, tomatoes and pickles.

Inevitably, the pizza; there are eight, including one labeled “Persian” (sausage and mushrooms), another with beef gyro meat, feta and tomatoes. For reasons that seem shaky in retrospect, we picked the veggie version with eggplant, olives, onions and tomatoes. Here’s another suggestion: ask the kitchen to cut way back on the mozzarella as it swamps the other, otherwise good, toppings and turns the pie into something that makes the delicate manakish even more attractive in comparison.

Naara’s pastries, such as the baklava, come from Pasha next door—leading us instead to try two unfamiliar drinks: the hot sahlab and the cold carrot juice with pistachio ice cream. The sahlab is theoretically made from the powdered root of a kind of orchid; dusted with cinnamon and chopped pistachio it comes across as cross-cultural comfort food. The more colorful carrot glacé balances virtue with pleasure; it’s best at the bottom of the glass—and beats a Blue Surfer hookah sesh by far, we suspect.