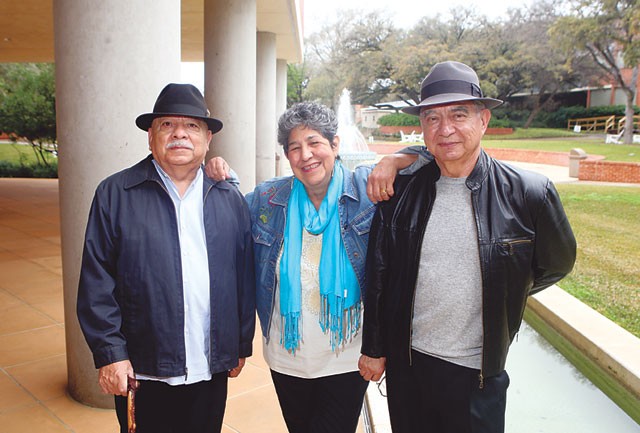 In June 2012, four doctoral candidates, three from the University of California at Santa Barbara and one from Michigan State University, became the world’s first Ph.D. graduates in Chicano Studies. It was a feat over 40 years in the making. Today’s university programs in Ethnic Studies arose from the efforts of college faculty and students who, following the Civil Rights Movement, protested the lack of ethnic representation in university curricula in the fields of history, art, literature, political science, and the social sciences.

In San Antonio late in 1972, a group of Chicano social scientists met to discuss a common experience — exclusion from professional academic organizations. Recognizing their need for a venue in which they could present new research, they formed the National Association for Chicana and Chicano Studies, which expects over 500 attendees at their annual conference in San Antonio March 20-23 at the Omni San Antonio Hotel.

In addition to the early group were professors of Spanish, like Arturo Madrid, now a professor of Modern Languages and Literatures at Trinity University and Chair of the 2013 NACCS Site Committee. “Many of us were preparing for academic careers and realized we didn’t have Chicano faculty. We needed to develop a field of study that addressed the historical experiences and cultural expression of Mexican Americans,” says Madrid. “The field now ranges widely from archeology and art to urban studies.”

However, amid the growth of NACCS and an increasing number of ethnic studies programs across the U.S., Chicano Studies continues to be challenged. Only two weeks ago in Acosta v. Huppenthal, a federal judge denied removing a ban on teaching Mexican American Studies in the Tucson Unified School District, a motion that ethnic studies supporters see as collapsing the past into the present. The court cited that the motion “did not meet the high threshold needed to establish a constitutional violation.”  In 2012, NACCS, along with over 20 other academic and community organizations, filed an amicus brief in support of MAS at TUSD and against HB 2281, the law state law that caused the ban, citing the First Amendment freedoms of the students and instructors as well as the Equal Protection clause of the Fourteenth Amendment: “The MAS program arose from a court-ordered effort to remedy discrimination against Mexican American students as part of a desegregation case requiring the district to remedy segregation and inequity.”

In a press release concerning the brief, past NACCS Chair, Devon Pena stated, “This respected field of study has been unjustly targeted and demonized by Arizona authorities, which is strangling the pursuit of a comprehensive education and silencing the perspective of Mexican Americans.” NACCS also called into question the TUSD’s censorship of books by Mexican Americans authors like Sandra Cisneros, Tomas Rivera, and Rudolfo Anaya, whose award-winning novel, Bless Me, Ultima, was released this February as a film in theaters nation-wide.

“We are under attack. We find ourselves in a position to affirm our place in society,” says Madrid. “We have the intellectual resources and capacity to invigorate this society. We represent the future.” This resource stems from the research of Chicano academics, many of whom work to challenge attempts to de-legitimize and suppress the Latino vote, to demonize immigrant communities, to restrict comprehensive educational initiatives, and access to housing and healthcare.

“We look to the scholarship of NACCS members. They have seen these issues, not just anecdotally; they also produce the scholarship. We’ve also focused on TUSD because it has been under assault and mischaracterization,” says Susan M. Green, chair elect of the NACCS Board. “The ability of young people to have access to Chicano studies is vital. Students of all backgrounds do well when they take Chicano studies.”

As host to the 40th annual NACCS conference, San Antonio is as historically important as it is culturally relevant. “Learning from Our Past, Defending Our Rights in the 21st Century,” this year’s conference theme, seeks to illustrate the continued civil rights struggle of Mexican Americans. Many of the major players in Chicano civil rights have come from San Antonio, and it is the oldest Mexican American community in the former Tejas, making it the politically attractive Mexican American cultural center is has become.

“San Antonio is an incubator of Chicano organizations: the Hispanic Association of Colleges and Universities, the Mexican American Legal Defense and Educational Fund, the Southwest Voter Registration Education Project and others” says Madrid. “It has also had extraordinary political leadership: Henry B. Gonzalez, Maria Antonietta Berriozábal, Henry Cisneros, and now Julián and Joaquin Castro.”

Adding to that litany of firsts, Antonia Castañeda, a historian and co-chair of the NACCS 2013 Site Committe adds, “The Esperanza Peace and Justice Center, the Mexican American Youth Organization, and the League of United Latin American Citizens began here. San Antonio is a major focal point for all of these reasons.” She also points out that many of the major players in civil rights cases had some origination in San Antonio, from Hernandez v. Texas the first Mexican American case before the U.S. Supreme Court in 1954 to Edgewood v. Kirby, a landmark case citing discrepancy in public school financing in 1984.

San Antonio has also been home to five inductees to NACCS’ highest honor, a lifetime achievement award entitled NACCS Scholar. Castañeda is a founding member of Mujeres Activas en Letras y Cambio Social, a professional organization for Chicana scholars. She also oversees the publication of new Chicana scholarship as co-editor of the Chicana Matters series at the University of Texas Press.  Madrid, who in 2004 served on the U.S. Secretary’s Commission on the Future of Higher Education, was founding president of the Tomas Rivera Policy Institute, as well as a board member at the National Center for Public Policy and Higher Education. He continues to teach and research for “Mexico, the Americas, and Spain,” a program at Trinity University.  Tomás Ybarra-Frausto, formerly a Stanford University professor and Associate Director of Creativity and Culture at the Rockefeller Foundation, has been awarded the Joseph Henry Medal by the Smithsonian Institute for Latino Initiatives. As a pioneering scholar of U.S. Latino art, he writes extensively about Chicano visual production. Norma Alarcón, Professor Emeritus at the University of California at Berkeley, founded Third Woman Press, which she developed in the late 70s. The press contributed works by Chicana and Latina authors, many of whom are now assigned in Chicana Studies courses.  Norma E. Cantú, former board member of the American Folklife Center at the Library of Congress and Professor Emeritus at the University of Texas at San Antonio, recently made her home in San Antonio and now continues her work at the University of Missouri-Kansas City in the Department of Latino Studies.

“Mexican American studies is a vital part of American history, and if we are to have an educated public, which every society wants, we need to know that Mexican Americans have been a part of this country’s history since the beginning,” says Carmen Tafolla, San Antonio’s first Poet Laureate, whose background includes having been a senior lecturer in UTSA’s Department of Bilingual and Bicultural Studies, where Mexican American Studies is a major component.

In January, conservative Texas legislators sought a report from the Texas Association of Scholars which cited that more than 50 percent of American history assignments in courses at The University of Texas-Austin and Texas A&M focused on race, gender, and class. The legislators, having neither visited the classes nor interviewed the professors, argued these courses were not comprehensive of U.S. history, ironically, the same argument made against programs that exclude the histories of people of color. Keeping a curriculum inclusive of ethnic studies is vital and the focus of the Society of Mexican American Studies, a group comprised of San Antonio university and college MAS programs, including UTSA and Our Lady of the Lake University, where due to a new emphasis on “marketable skills,” Mexican American Studies recently made the list of programs to be phased out.

“We are a very youthful population. We need major investment in order to assure a prosperous future for our society and citizens. We need to assure our children are educated and have a chance to develop intellectually,” says Madrid of the goals of this year’s NACCS conference.