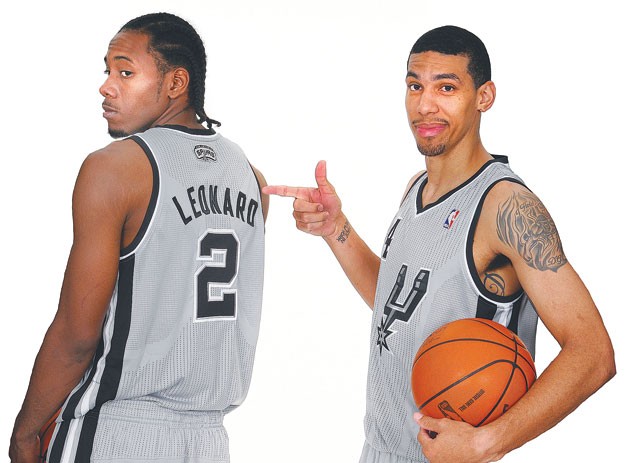 Earlier this offseason, the fashion police at the Entertainment and Sports Programming Network ranked the top uniforms in the NBA with the San Antonio Spurs coming in second behind the Boston Celtics. ESPN lauded the classic silver-and-black color scheme along with the Spurs' ability to integrate a graphic image onto their chest typography, while lamenting the current V-neck. Last week, the Spurs dropped a silver nugget on San Antonio hoops enthusiasts starving for anything basketball-related since the closing of the Olympic Games.

"We are introducing a new and unique Spurs jersey this coming season," announced Rick Pych, Spurs Sports & Entertainment President of Business Operations. "The new design simply features our iconic 'spur' logo and it is positioned over the heart as it has such enormously deep roots with our team, fans and the entire community. It's the first-ever NBA jersey logo without any writing or peripheral design on the front of the jersey and we're very glad to be introducing this new use of the classic icon of the Spurs to our fans."

Described by Spurs shooting guard Danny Green as "a nice alternative," the new gear has been met with mixed results. Although the new alternate uniform has been three years in the making, hoops pundits were quick to point out their accessibility to accommodate a corporate logo, something Dallas Mavericks owner Mark Cuban has been pushing for on NBA jerseys for quite some time. The biggest complaint from fans has centered on the dull gray that dominates the uniform. It feels like an awkward choice for the Spurs considering other high profile teams in the league have recently embraced black.

The NBA Champion Miami Heat kicked things off last season with their Back In Black alternates and the newly re-minted Nets took it a step further by adopting a black-and-white color scheme for their move to Brooklyn. A recent New York Times piece on Nets' minority-owner Shawn Carter, aka Jay-Z, stated that the rapper helped choose the team's new logos and colors, personally appealing to the league to sign off on the stark designs. The article curiously noted the NBA initially objected to the colors because "African-American athletes did not look good on TV in black," but also states that a league spokesperson adamantly denied this claim.

For a league that instituted an off-court dress code to counteract the hip-hop swagger embodied by former MVP Allen Iverson, this notion doesn't seem too far-fetched. Conspiracy theories aside, the Spurs will soldier on in their original home whites and road blacks, with the occasional silver thrown in, both on the hardwood and on television. When their season tips off on Halloween in New Orleans against the Hornets, real basketball will again take center court with fashion once again relegated to the sidelines.