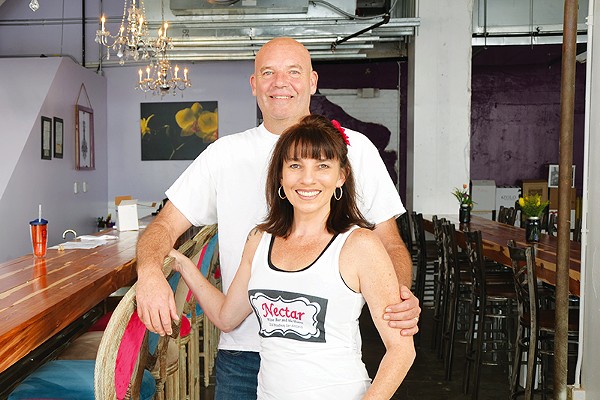 Broadway is booming by the Pearl. Still, the famously long street struggles out of downtown where seedy hotels and bus stations dot the cityscape.

"We're taking back LoBro," says Rob Stephens, who, along with his wife Rachel, recently opened Nectar in the long-neglected Calcasieu building. Nectar is a wine bar. Yep, you read that right.

But Nectar is not alone in this unlikely sounding endeavor: Rob cites French-owned Saveurs 209 and La Boulangerie, right across the street, and Schakolad Chocolate Factory, only a few steps away, as culinary cohorts. And, he says, "We're three blocks from the Tobin and the Majestic," a location that encourages singers from the San Antonio Opera to come in after performances (apparently still in fine voice), where they might mingle with toffs in tuxedos and kids in cutoffs — a blend that is reflected in an environment that mixes white picnic tables with antique-ish chairs upholstered in velvet.

The Stephenses met in San Diego at age 19 but didn't get married until both were 34. "She made me chase her 15 years," says Rob. During the chase, both got multiple degrees in topics as diverse as early childhood education ("Useful in managing a bar," says Rachel), chemical engineering and computer science. Both worked the service end of fine dining at various upscale hotels. And together they were lured to Seattle by the aerospace industry. Finding the soggy city too big a change from San Diego, the pair jumped at the chance to move back to the sun when Boeing began its San Antonio operation.

Boeing and Bordeaux would seem to have little in common — except that when the day job began to slow, the old passion began to emerge. "We asked ourselves 'Where do we want to live?' and decided we didn't want to go anywhere else." The next question was "What are we going to do to stay here?" And in what might seem like clichéd, hey-gang-let's-put-on-a-show fashion, the couple decided that if they felt the need for a place where they could sit at a table with a good but unfussy bottle of wine, they couldn't be the only ones. And thus began the search for a space on an artery out of downtown. "We looked from Blue Star to Alamo Heights, but nobody would call us back," they say.

Fast forward to the Calcasieu building (designed as an office building in 1914 by famed local architect Atlee B. Ayres, converted to apartments in the '40s and now being revitalized by new, nonprofit owners) and a deal was finally made on a space that hadn't been used in years. There was no plumbing, of course no air-conditioning, all the electrical [wiring] needed to be redone ... "Everything that didn't require a license, I did myself," says Rob, and that includes the rustic bar tops and tall tables. To be honest, some of that shows. The fact that some of the walls simply crumbled when approached by a paint brush isn't glossed over. The lighting may not be the most sophisticated ... but when you have a glass of sauvignon blanc in hand and the late-afternoon sun slants through the generous windows at the street, all is right with the world.

Especially on a Tuesday when much of the by-the-glass wine list of 18 or so selections changes and prices are discounted 20 percent. "I had been drinking primarily Bordeaux for years, so I had to retrain myself," says Rob — to which Rachel adds, "We tasted more than 500 bottles before we opened, and rejected more than 400 of those." The current selection lining the walls totals about 130, including chilled whites, and the shoot-for goal is 300. Prices start at around $12, and bottles may be consumed there or taken home or to a hotel room. In addition to being able to sample a rotating selection by the glass, the couple hosts a weekly, thematic wine tasting (rieslings were a recent topic) for free — complete with hors d'oeuvres. It's apparent from looking at the food menu, that cheese enjoys an almost equal status with wine.

"I get really excited thinking about cheese," says Rob, who admits he was initially disappointed with local wholesale selections. They finally settled on San Antonio's Gaucho Gourmet and Antonelli's from Austin as suppliers for both cheese and charcuterie. The offerings on one week's cheese menu ranged from an Herve Mons French camembert to a goat's milk cheese from Waco. In a display of neighborly solidarity, breads come from La Boulangerie, desserts from Schakolad.

And in an attempt to keep Nectar and downtown in the minds of potential customers, the couple hosts a monthly First Friday wine walk to nearby bars such as Haunt. Consider it educational or just a way of owning the street. "We saw all kinds of crazy stuff when we were under construction," says Rachel, "but now not so much."