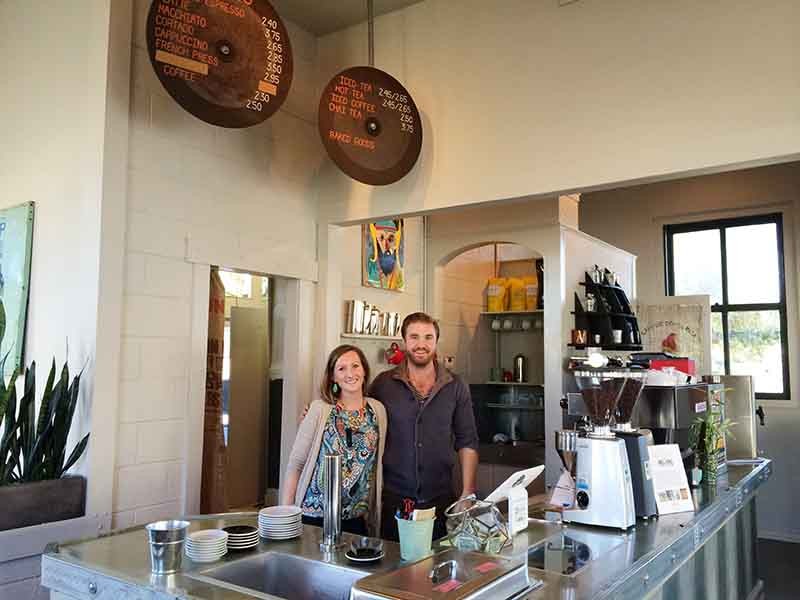 Haute coffee has made its way to Alta Vista via Press Coffee. Opened by partners Bronson Holbrook and Natalie Nazarewicz, at the almost-corner of French and San Pedro, Press Coffee's adding a mix of versatile beans and eats in a homey neighborhood spot.

Previously used as a carriage house for the Frost Mansion, a pharmacy and most recently a hair salon, Press Coffee is housed inside an airy 600-square-foot space (that required the demolition of a few walls by Holbrook's father). The spot was curated in part by both Holbrook and Nazarewicz and the results are wildly pleasing, as it feels like a friend's sun-filled living room-meets-chic workspace. Salvaged saw blades double as menu and outdoor signage painted by Kristina VandeWalle, a friend of Nazarewicz's who's also responsible for visual displays at regional Anthropologie stores. The shop comes off as both posh and inviting in one fell swoop, and while just over 30 occupants fit inside, the pleasant outdoor patio is still a work in progress.

Over on the coffee side of things, Press Coffee offers espressos, lattes, macchiatos, cortados, cappuccinos, French press and drip coffee, along with iced and hot tea, iced coffee (which will come in handy come spring), chai tea and Buddha's Brew kombucha on tap. Caffe Luxxe, out of Santa Monica, California, ships their Testa Rossa beans for Press Coffee's espresso needs, and also serve as a dark-roast option for their French press. Barrett's Micro Roast Coffee, from Austin, and Amaya Roasting Co., out of Houston, are also utilized.

For the snacking type, Press Coffee carries a line of pastries via C'est La Vie Baking Company off West Avenue, and for those looking to have the best of both worlds, the shop offers breakfast tacos from a rotating cast of vendors...because why shouldn't you enjoy a great latte with a bacon and egg taco?

Regulars so far include neighborhood denizens out of Alta Vista, Beacon Hill and Monte Vista, ladies who coffee, students and the occasional Tinder date. As Press Coffee gains a following, the partners are working on expanding their hours so as to not disappoint the bump of afternoon coffee drinkers.

As for their kooky logo, stop in and ask them about Murad IV, and be glad you're not a coffee drinker living in the Ottoman Empire in the early 1600s.

Correction: Thursday, December 4, 2014, 1:09 p.m.
A previous version of this article included an inaccurate quote credited to Natalie Nazarewicz. Her statement was transcribed incorrectly due to technical difficulties.