If the banality of evil weren't apparent before, then receiving a spam letter from neo-nazis might clear that up for you. On Friday, Folklores Coffee House posted an image on Facebook of a form letter they received from a Milwaukee-based group calling themselves "New Order." If there's any question about their affiliation, you need only glance at the swastika inside the "O" of the logo at the bottom of the manila letterhead. 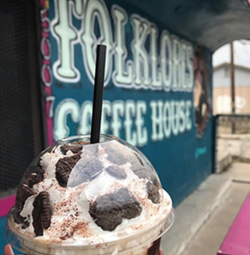 The letter is comprised of the typical drivel extolling "white pride" that we've  come to expect from these bigots, but, it's admittedly a tad strange that they'd bother to target a small business in San Antonio.

Folklores owner Tatu Herrera reported the letter to the Southern Poverty Law Center as well as posting a photo of it on Facebook.


I’m not really sure what to write, I’m furious, confused, a little bit of everything. I’m not sure if this is a joke or what but a couple of things. I don’t put up with racism, 2nd you sent it to a business and addressed to a business that obviously has nothing to do with racism, nazism, white power none of it. 3rd, if it’s a way of intimidation, you’re going about it the wrong way. This definitely isn’t the way . Thanks for scaring our staff. #lovehasnofear