Netflix has a sequel to The Babysitter, and it thankfully doesn’t suck 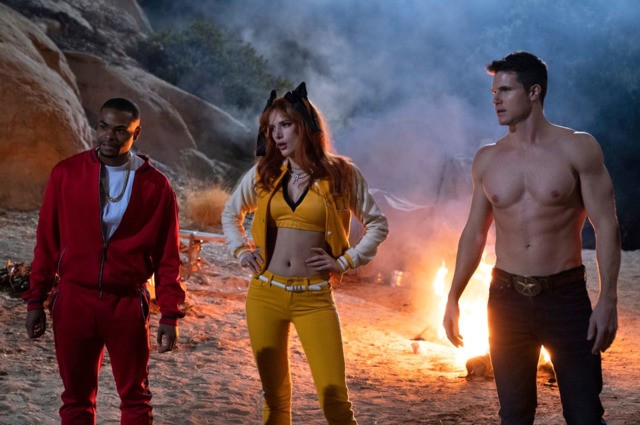 When The Babysitter debuted on Netflix in 2017, horror movie fans, including yours truly, fell madly in love with Samara Weaving, who played the titular character, Bee, a loving, charismatic mentor to young Cole (Judah Lewis), who also happened to be the leader of a fanatical blood cult.

The film was a raucous, gory delight, and remains the best movie on director McG’s otherwise spotty IMDb profile.

Weaving has since garnered acclaim as a next generation scream queen, absolutely killing each successive role, whether Mayhem, Ready or Not or the criminally overlooked Guns Akimbo.

Which is why it’s a big deal that she, along with the entirety of the original cast, have returned for The Babysitter: Killer Queen, which just dropped on the streaming platform last week.

Killer Queen lacks the coherence and razor-sharp dialogue of its predecessor, but it’s a fun ride none the less.

Set two years after the first film, Cole is now suffering through a new kind of hell, high school, and still struggling to convince his parents and his therapist that what happened that night actually, you know, happened.

“I feel like Sarah Connor in ‘Terminator 2’ trying to convince people robots are real,” Cole says early on in a voiceover.

Blood cult member Allison (Bella Thorn), in a flashback to an early job audition, proclaims, “I want to be the world’s best journalist, like Geraldo, only fuckable.”

You get the idea.

Both the humor and the special effects, which rely heavily on CGI carnage, are hit-or-miss, but viewers with patience are rewarded, including a gloriously bloody antler chandelier impalement.

Don’t even bother with the story, which basically resurrects all the dead cultists, who have just hours before sunrise to complete the ritual from the first film or they will be stuck in limbo forever.

There are swerves and betrayals, new alliances forged and teen hormones put to the ultimate test. None of is life-or-death serious, and that’s okay.

This isn’t that kind of sequel.

I’m actually pretty surprised that Weaving chose to return, given her rapid ascension, but it’s wonderful to see her even if her role is basically a series of extended cameos.

If The Babysitter: Killer Queen had been a complete bomb, I would have called her decision a serious miscalculation, but it’s not.

To appreciate McG is to accept that he basically never stopped directing music videos, meaning he works best in short inspired sequences, and to overlook that he cribs a ton of visual cues from other, better movies. That’s okay too.

There are flashes of Scott Pilgrim vs. the World, snippets of Valley Girl and Clueless, and echoes of far superior satanic ritual thrillers, but what really matters is that The Babysitter: Killer Queen rockets along with purpose, rarely stalls and provides enough laughs and dismembered body parts to satisfy all demographics, regardless of age and/or taste.

This article first appeared in Creative Loafing Tampa Bay, an affiliated publication.
Get our top picks for the best (online!) events in San Antonio every Thursday morning. Sign up for our Events Newsletter.