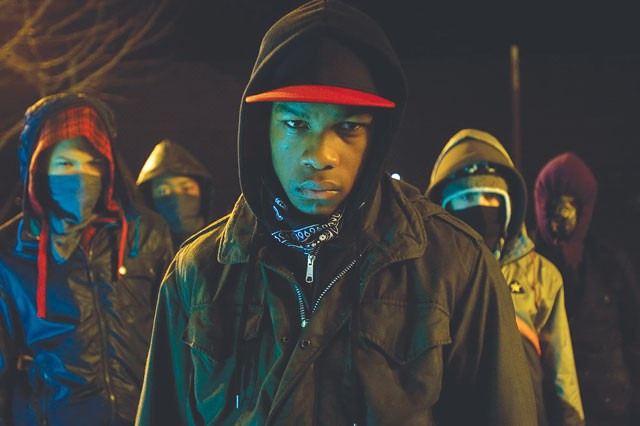 Written and directed by Joe Cornish, who co-created the weirdo British sketch comedy series The Adam and Joe Show in the ’90s, Attack the Block desperately wants to be for sci-fi thrillers what the hilarious 2004 satire Shaun of the Dead was for zombie horror movies. Even though both films share producers, Cornish is no Edgar Wright, which is clearly evident from the humorless script and pitiable youngsters that make up this extraterrestrial turf war between wannabe hoodlums and what the kids here call “big gorilla wolf motherfuckers.”

There’s really no better way to describe the creatures that crash land in a London neighborhood except, perhaps, by adding that they’re really pissed off after a gang of troublemaking teens bludgeon one of them to death and then decide to hunt down the rest like safari trophies.

Moments before the alien invasion, we witness the misfits, led by 15-year-old gangsta Moses (John Boyega), mug a helpless girl (Jodie Whittaker) in their borough. Quickly labeled as the antagonists of the film, Cornish’s challenge is to make the little punks likeable enough that audiences won’t root for the monsters to claw their baby faces off.

Instead, Cornish chooses snarky attitude over genuine personality and scrambles the script by adding an ineffective side story about a drug deal gone bad, mostly to insert Nick Frost into a role as a fat stoner with a room full of weed and nothing interesting to say. Attack the Block could’ve been a blast, but with characters this useless, a better movie title would’ve been Battle: U.K.