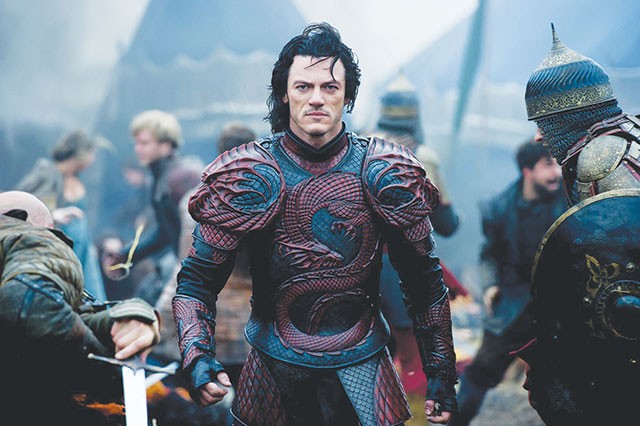 Untold? Really? How can that be? We’ve been telling Dracula stories for more than a century. There are literally hundreds of movies featuring the Transylvanian bloodsucker (and that’s not counting all the films about vampires who aren’t named Dracula). How can there possibly be anything yet untold about him?

Now, I haven’t seen all those previous movies, but I’ve seen the major ones so I feel fairly confident in confirming that yes, Dracula Untold seems to have found some new angles on an old, oft-told tale, both in the character himself and in the way that the vampire mythology plays out. Not that the movie is not familiar, of course, because “familiar” is pretty much all Hollywood does these days. But this is more Game of Thrones than Nosferatu. More superhero than supernatural. More tragedy than horror.

This is Dracula’s origin story (well, another one). And yes, there will be more stories to come.

It’s the 15th century (or so I presume; the date isn’t mentioned) in Eastern Europe, which means the Turks are on the rampage and Vlad Tepes (Luke Evans) is sitting on a throne in Transylvania. He has retired from impaling and just wants a peaceful life with his wife (Sarah Gadon) and young son (Art Parkinson) and for his people, who have suffered greatly at the hands of the Turks. Alas, literally as Vlad and friends are toasting “10 years of peace and prosperity,” emissaries of the sultan Mehmed (Dominic Cooper) arrive to demand 1,000 Transylvanian boys to become child slave-soldiers to fight in the war against everyone. We know that Vlad is a good guy because he is himself a wounded former child slave-soldier, veteran of the Turks’ wars, scarred in body and soul by his experience, and also because with a madman bent on world dominion on his doorstep, he thinks he can “negotiate.”

He does try, but... oh, poor Vlad. With no army of his own, he is forced to resort to the convenient ghoulish specter (Charles Dance) who lives in a nearby mountain and—in one of those twists on vampire legend—is able to confer upon Vlad the strength and magical abilities of a vampire for three days.

If Vlad can resist the impulse to drink human blood in that time, he will revert to being human. So now he just has to win a war against the most powerful army in the world in 72 hours. And also not drink any blood.

Ah, but I’m being unfairly flippant to what is honestly a solid action fantasy that didn’t once inspire in me the urge to shout something silly at the screen. The first film from commercial director Gary Shore and newbie scriptwriters Matt Sazama and Burk Sharpless, this is smarter and more stylish than it could have been, and more elemental and visceral than I expected. It’s mostly Luke Evans who makes it work, though. He brings a lot of potent presence and still-waters emotion to a character who is more in the new vein of reimagined comic book heroes than he is like any Dracula we’ve seen before: flawed and complicated and at least as vulnerable, physically and emotionally, as he is powerful.

All the leather doesn’t hurt, either. Or the notable female-gaziness of how the film presents him. There’s an actual legit story reason why we need to be looking at his handsome bod. Seriously. Probably the only thing missing to render this ultimate popcorn fodder is a dose of humor ... which I bet we get next time out. Untold ends with the promise of a sequel, and it’s so enticing that I want that sequel now.