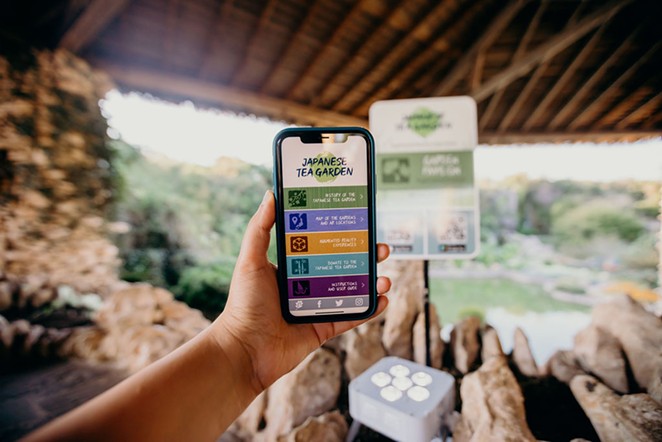 A new app, being billed as the first of its kind in the nation, aims to make the history of the Japanese Tea Garden more accessible for visitors to the historic San Antonio landmark.

The Japanese Tea Garden Augmented Reality Experience App was developed over the course of 18 months by San Antonio-based Geomedia Inc. in collaboration with the San Antonio Parks Foundation (SAPF).

The project was "inspired by the desire to provide an educational component that allows patrons to appreciate the peace and serenity of the garden, unencumbered by physical signage," according to statement from SAPF.

To that end, the app provides a visual history of the garden, a map and several augmented reality locations. The six augmented reality experiences include a selfie with a flying dragon named Kokoro and the virtual release of custom-colored koi into the garden's ponds.

What's more, the software offers a glimpse into the garden's history via photos drawn from the archives of the Institute of Texan Cultures. Some date back to the mid-1800s, when the city leased the land to German masons.

The app is backed by extensive research, according to SAPF.

Ann Enkoji — daughter of Mable Jingu Enkoji, whose family lived at the garden when she was young — contributed by "ensuring historical integrity and representation for the Jingu family, who lived at the garden operating the Bamboo Room beginning in 1926," according to a statement.

The project was funded by garden donations and operating profits from the site's Jingu House Restaurant.

The Japanese Tea Garden app is available for free download on the Apple and Google Play stores.