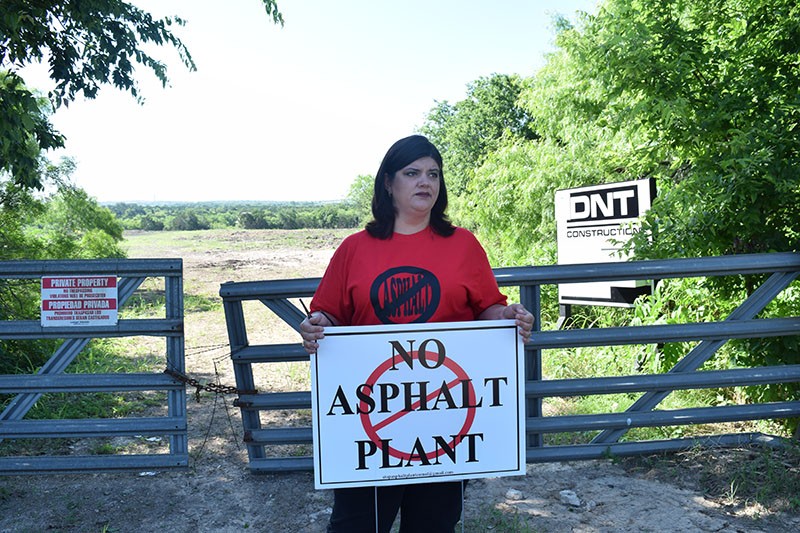 Just north of San Antonio in Comal County, there's a little plot of land that actually sits in no-man's land — no local city government has jurisdiction.

A bulldozer has cleared the lot. Scattered tree trunks poke out of jumbled rubble while vibrant green trees stand watch surrounding the plot.

Someone's about to put it to use.

The future site of an Industrial Asphalt plant, it's less than a mile away from a 1936 limestone quarry operated by Hanson Aggregates — a German-owned company. Hanson is leasing the land to Industrial Asphalt.

Business-wise, this is a smart operation due to the close proximity of the companies that will mutually benefit from the facility.

But Greg Mims, who owns a historic house right across the street from the future industrial plant, does not plan to welcome his new neighbor.

"The entire community and all the surrounding smaller towns and cities are in full support of our opposition to the plant, but everyone lacks teeth," Mims told the San Antonio Current. "No one has authority to stop this."

A contingent of concerned citizens has convinced Garden Ridge, Schertz and New Braunfels to all pass resolutions in opposition. But they can't actually stop construction of the future facility, which sits just outside Garden Ridge limits. Neither can Comal County leaders.

Mims and a group of community activists who live in Comal County and Garden Ridge, a city that incorporated in 1970, fear that the plant will result in extreme amounts of truck traffic that will threaten a popular route used by bicyclists, motorcyclists, joggers and cross-country athletes from nearby schools.

"These guys are independent haulers, so the faster they get there and turn that load around, the more money they make," Mims alleged. "They have no respect for the law and there's no level of control in the county."

Then there are environmental concerns, like hazardous runoff possibly entering the Dry Comal Creek during floods, such as during last month's incessant rainstorms.

"If I can get some level of a moratorium halting construction, we can get real time science on the impact to water and air quality and whether it affects the people who live there," Mims said.

But that's not likely to happen because Industrial Asphalt said it has nearly all the necessary permits to begin construction.

John Ramming, owner of Ramming Companies, which includes Industrial Asphalt, has operated in Central Texas and San Antonio for more than 20 years.

"We have one permit to go," Ramming said. "But it's just a formality that takes a little longer to get."

He disputes Mims' environmental concerns, citing surveys of the land by Westward Environmental, a consultant the company hired to assess the site.

"We have a retention pond for runoff and are going to follow all the guidelines the state has asked us to follow," Ramming said. "We have a stormwater prevention plan. All of our storage tanks are enclosed in concrete so if there ever is an issue, there is a containment area."

Mims also cites Edwards Aquifer concerns in his opposition to the plant.

"We are in the recharge zone about 100 feet into our property," Mims said.

Actually, not the case, Ramming countered. The plant property sits just outside of the recharge zone and not over the aquifer, he noted.

As for truck traffic, Ramming admits it will increase, but not exponentially. The area is already heavily used by trucks hauling rocks and asphalt from the quarry to spots throughout San Antonio and Central Texas, he clarified.

"Now it's just going to be diverted to our plant," Ramming pointed out.

By default, that means the truck traffic will be redirected in front of Mims' house, along with several other homes on FM 2252 donning "No Asphalt Plant" signs on their fences. 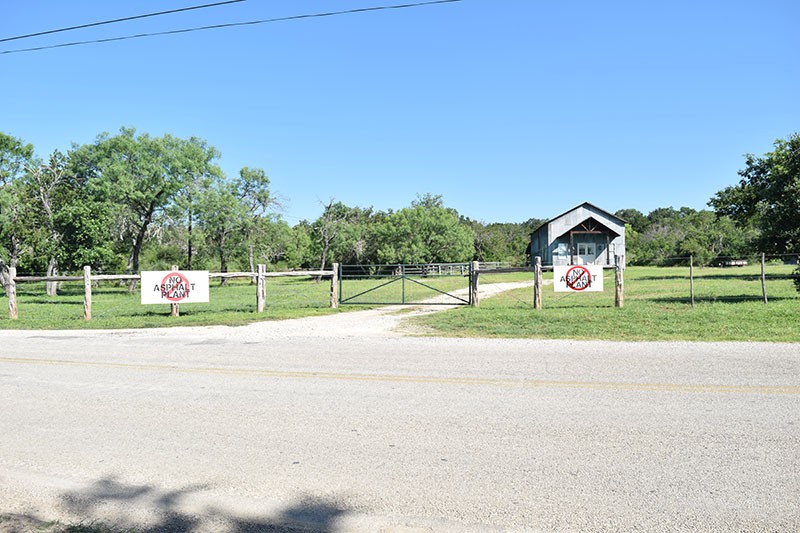 Neither she nor anyone else in the area had a clue that a new plant was in the works at the previously unused lot.

"We were taken by surprise," McGovern told the Current. "They came in the dark of the night."

However, as both McGovern and Mims explained, this isn't the first time the community has tangled with Industrial Asphalt.

"We were really close to having that plant inside the Hanson Aggregate operations," Ramming said.

"All we needed has a height and parking lot variance. We couldn't get that so we had to move our location," he added.

"Out here, anybody can do whatever they want," Blackwell said.

Ramming, however, insisted that he's not trying to mislead anyone.

In an email provided to the Current, Steve Geiger, South Texas Vice President for Lehigh Hanson, the German company that owns Hanson and is leasing the land to Industrial Asphalt, pointed to his company's legacy of being good neighbors.

"Hanson Servtex Quarry has been active with the community over the years through philanthropic support to local organizations," Geiger wrote.

But promises and claims don't quite convince local skeptics, who say they can see through the company's cunning ways.

"These guys know exactly what they did," Blackwell said. "They went straight to the Achilles heel, where they knew we couldn't fight."