New Bar Takes Cocktail Experience In North Side To Another Level 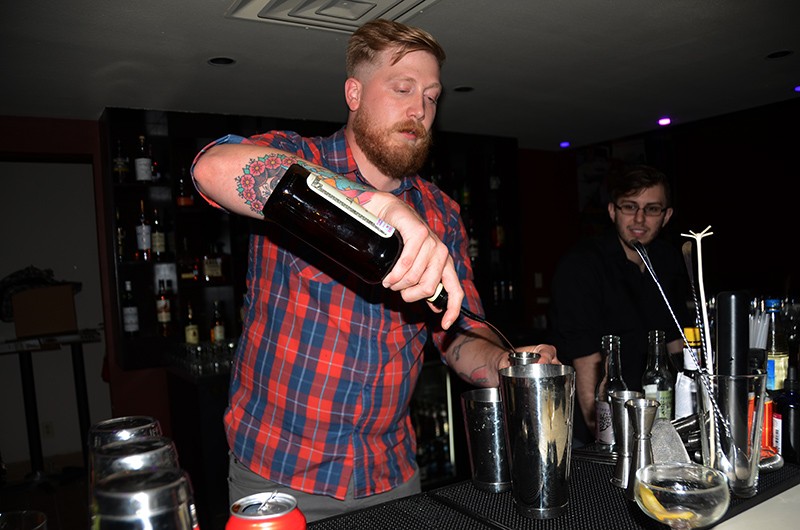 We can't call it a cocktail takeover of the North Side if there are really only a handful of craft bars littering the landscape. Still, there is an untapped market of bargoers who might be in the mood for ditching the skeazy nightclubs or the hordes of sports joints (and since the Spurs are out of the playoffs, our collective city calendar is now wide open) in favor of spots that offer a solid lineup of cocktails.

The bar, opened by Adrian Martinez along with the same business partner who helped him manage China Garden, is the second of two projects to open from this team. To take cocktail knowledge to Loopland, they enlisted the help of bartender Matt Dulaney.

Spirit aficionados might recognize the young bartender from Esquire Tavern, Bohanan's Bar and most recently, Blue Box. At 27, the native Texan has moved around more than two dozen times and didn't dive into the service industry until five years ago as a server at New Braunfel's McAdoo's, which lasted a few months. Dulaney moved to San Antonio and landed a job at Boudro's on the River Walk.

"I have no idea how I got hired there, but it was probably one the of the best things that happened to me," he said. His time on the river helped him land the job that got him hooked on cocktails at Esquire Tavern. The bar opened in April 2012, just shy of Fiesta, but even with all the madness, it's where Dulaney gained his love of cocktails. But like a good martini that needs more than four-dozen stirs in excellent ice, Dulaney had to wait his turn at the well for six months before then-bar manager Jeret Peña decided to train him.

"Jeret had me on service well almost every weekend for several months and he'd stand in front of me and point out everything I was doing wrong. At the time I hated it, it was a horrible, terrible experience," Dulaney said. "Now looking back I realize how incredibly thankful I was for him having an intense watchful eye."

Dulaney's training later included a year at Bohanan's, initially under the watchful eye of Sasha Petraske of New York's Milk & Honey, who trains all 'tenders at the steakhouse's bar.

"That was incredibly intensive. Sasha was different because he's very scientific in his approach, very calculated. We were measuring things down to the milliliter, before and after shaking," Dulaney said. He left Bohanan's for the more casual vibe at Blue Box, where he learned his speed.

With strong fundamentals, precision and speed, the shaggy-haired dude is trying his hand at both training new-to-cocktails personnel and helping introduce classic cocktails to the area with Hidden Dragon, which takes over a slice of real estate formerly used by Ming Tree.

"It had an '80s, Kung-Fu-film kind of vibe, which I loved," Dulaney said. In its place is a dimly lit bar filled with posh white leather booths and stools and an assortment of Asian touches throughout the bar. Dulaney's pride and joy is a wall of classic martial arts film posters emblazoned with the bar's dragon logo. The space is neat and minimalist and currently laid-back enough to enjoy a few cocktails.

If you're to dip your toe into the cocktail world at Hidden Dragon, the menu definitely is worth your while, with 12 cocktails to choose from, each spelling out ingredients. During our Cinco De Mayo visit, my bar-going partners enjoyed a Tequila Crusta, a twist on the classic marg with a sugar rim. I opted for the White Lion, "a fresh summer drink that came straight out of the Caribbean" with rum, lemon, sugar, raspberry syrup and dry Curaçao. The rest of the menu includes small variations of the classic Manhattan, Moscow Mules and El Diablo — all simple enough to sway novice cocktail drinkers. The prices don't hurt, either. Cocktails will set you back between $6 and $9.

If booze ain't your jam, Hidden Dragon offers a small selection of craft beer in bottles and cans with prices ranging from $3 for a Lone Star to $9 for a Hitachino Nest Nipponia bomber and a teensy (for now, I'm assuming) wine menu with prices going up to $11 for a glass of moscato.

Though the bar opened the same week as sister restaurant Smoke, where Dulaney's bar menu delivers original cocktails with fun elements such as actual cotton candy and charred planks of wood to add that hint of humo, Hidden Dragon is using Smoke's attention to its advantage.

"There's been a lot of good reception from the two places. There were a lot of people I would see pretty regularly that would come to Blue Box, or Bohanan's and they live out here, Hollywood Park, Shavano Park, Churchill Estates, Stone Oak, even," Dulaney said. "If we can bring that kind of cocktail experience, the same level, five minutes from your house, I think we can make this viable."

Though Dulaney admits that at first he wasn't ready for what running a bar from start to finish meant — he's working 16-hour days and had his first day off two Sundays ago — he's using this crash course to help train his current and future employees. He stressed the Japanese apprenticeship style of learning, which he's using on his crew. They're learning what a liquid meniscus is, for example.

"I didn't want them to focus on making crazy ingredients, but rather their technique and form and the spirit. I wanted to tone it down," Dulaney said.

So the Asian-inspired flavors will have to wait for now, but if you're really hankering for a well-made Manhattan outside Loop 410, Hidden Dragon is calling you.