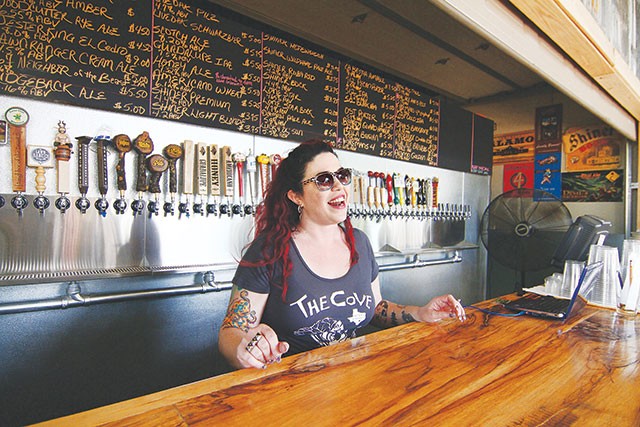 Believe it or not, The Cove co-owner Lisa Asvestas was once a Coors Light drinker. “Seriously, Coors Light,” she said with a hint of contrition. Asked if she still drinks the swill, Asvestas was adamant. “No, no, are you kidding? I know there’s so much more out there now.”

The Cove, with its well-earned reputation for local, sustainably sourced food, is now hoping to draw a different kind of locavore: the Texas craft beer lover. Sprucing up some (until recently) underutilized back patio space, Sam and Lisa Asvestas have built a colossal new bar dedicated entirely to Texas craft brews.

While they started building up a formidable bottled beer selection a few years back, this is the first time The Cove has gone big for kegs. And they’ll have a lot of them. Among the 48 taps, they’ve got the full lineup from New Braunfels-based Guadalupe Brewing Co., including Guadalupe’s dessert-rich Scotch Ale. Lisa says she’s currently hooked on Guadalupe’s Texas Honey Ale, which is smooth, creamy, and a little sweet.

It’s a far cry from her Coors-drinkin’ days.

The Cove’s new bar would have been an outlier in this city just two years ago. But locally owned craft beer offerings are exploding in San Antonio. Along with The Cove, which quietly opened its new bar in February, several watering holes have either opened or radically ratcheted up their offerings in the past two years, with most based downtown.

Last year saw the opening of the Filling Station Tap Room. Housed out of a converted gas station next to the Station Café on the edge of the King William, the Tap Room keeps about a dozen beers on tap, usually Texas brews and craft favorites from elsewhere, with an emphasis on IPAs.

In the past year, The Friendly Spot proprietors Jody and Steve Newman pushed Southtown craft beer offerings even further. In addition to opening up the Alamo Street Eat Bar — which keeps a bar stocked with Texas faves 512, Saint Arnold, and Ranger Creek, and Independence kegs along with the standard Lone Star, Pabst, and Bud Light — the Newmans opened up a second bar at The Friendly Spot dedicated entirely to craft beers. The icehouse’s taps jumped from about 20 to 76.

Jody Newman says it’s all about “making sure good beer flows to the people.” Last year, Steve even opened up his own consulting business, which he dubbed The Newman Project (the logo is a cartoon of Newman’s face, complete with his woodsman-like beard). He built Stella Public House’s new 20-tap backbar, and consulted with Arcade Midtown Kitchen and Big Hops Growler Station (see our April 3 review) on their tap systems. This year, the Newmans plan to open a yet-to-be-named establishment at 1702 Broadway, which will no doubt center around good beer, though they’re mum on more details for now.

Another craft spot to watch for is Taps y Tapas (see “Industry News” pp. 43), which plans to open in the Five Points area in early summer. According to a press release sent late last month, the Mexican eatery will carry 20 craft draught taps, in addition to wine and locally roasted coffee.

The Cove, meanwhile, has expanded just in time to capture a piece of San Antonio’s beer renaissance. In addition to the new bar, The Cove has opened a small dog park and nearly doubled the restaurant’s garden, making room for poblanos, jalapeños, kale, and an expanded herb plot. And the Asvestas are staying true to the Cove’s sustainable roots, recycling and reusing what they can. On a recent visit, old bowling alley lanes sat under tarps, waiting to be turned into tables. An old pecan tree, which once sat in the middle of The Cove parking lot before it died, provided the wood for the new bar.