In one of the first scenes of the film Tía Chuck: A Portrait of Chuck Ramirez, a voice off-camera asks, “Chuck, what do you want to be when you grow up?” Sitting outdoors with a beer and cigarettes at hand, artist Chuck Ramirez, here a fully-grown man, contemplates the question before answering, “Umm … I don’t know … I guess an artist.”

Nearly eight years after Ramirez’s death resulting from a cycling accident, a new film produced by the husband-and-wife team of Mark and Angela Walley sheds light on the artist’s private life and creative process as well as his relationships with a wide circle of San Antonio artists and friends.

As depicted in Tía Chuck, Ramirez was an influential and larger-than-life figure within San Antonio’s art community, and his passing left a substantial void. A former graphic designer for H-E-B, Ramirez was known for his photographs of mundane objects against stark white backgrounds. Ramirez, who was gay, HIV-positive and half Latino, often incorporated themes dealing with identity, consumerism, disposal and, most glaringly, mortality. Before his death, many believed his career was on the verge of breaking out nationally and internationally. Tía Chuck covers Ramirez’s life and the lasting impression he made on San Antonio — from his early childhood years to the widely attended memorial service held in his honor at Blue Star Contemporary Art and last year’s career-spanning retrospective at the McNay Museum.

Known for their brilliantly produced short documentary films like Vincent Valdez: Excerpts for John and Jimmy James Canales: Chrome Mirrors, the Walleys have dedicated themselves to documenting and telling the stories of Texas-based artists. Much like their subjects, this creative team continues to make important contributions to a burgeoning Texas art scene.

Tía Chuck tells the story of one of San Antonio’s most beloved artists but also marks the feature-length directorial debut for the Walleys. It consists mainly of materials gathered from the archives of Casa Chuck, a residency program established in 2011 in the artist’s former home, and Ramirez’s personal photo collection, supplemented with new interviews conducted by the Walleys and thoughtfully recreated scenes depicting important moments in Ramirez’s life. The result is a captivating and visually stunning film that reveals and celebrates Ramirez’s private persona. The film successfully humanizes Ramirez, painting him as someone who was not only kind and loving, but also generous to a fault.

A project nearly a decade in the making, Tía Chuck will have its first public screening at the Tobin Center for the Performing Arts this Saturday.

A Spanish translation of the term “Auntie Chuck,” the title of the film is lifted from the comical nickname given to Ramirez by his friends. “It was something that people knew him as but it was also kind of a character, a more outlandish version of him,” Angela Walley said. “He very much represents what an aunt would be: this loving person who was there for you and who would cook for you … We didn’t want to pigeonhole him, but we definitely thought that name really symbolized different aspects of his personality that people loved him for.”

While the film highlights Ramirez’s many accomplishments, it also points to the more somber moments throughout his life, from his HIV diagnosis in the early ’90s, which motivated him to become a working artist, to the many lonely nights he spent in his apartment eating takeout in the years that followed.

Among the most revealing scenes are Ramirez’s personal home videos, where he is seen cooking for friends or visiting his grandmother in the hospital.

“We wanted to include those things because, in the end, we wanted people to understand — when you see how many people showed up to his memorial. We wanted some understanding of why or how he had touched so many people,” Angela Walley said. “He was so open and loving to so many different parts of the community that people felt touched by his presence in a lot of ways. That’s why you had such an incredible showing of love after he passed away.”

Originally, the Walleys had intended to make a short film in collaboration with Ramirez, who had given the couple access to hundreds of his personal iPhone photos. After his passing in 2010, however, the Walleys realized that to properly tell Ramirez’s story would require a full-length feature film. So they set out to complete their most ambitious project to date.

Among the earliest footage captured for the film are scenes from Ramirez’s public memorial service including then-Mayor Mayor Julián Castro speaking to the large crowd who had come to pay respects to the artist. The film culminates with the most recently shot footage of the McNay’s exhibition, “All This and Heaven Too.” After the McNay announced its plans for its career-spanning survey of Ramirez's work, the Walleys committed to completing the film by the exhibition’s end. Tía Chuck had its first private viewing in January during the closing of the exhibition.

Organized by chief curator René Paul Barilleaux and Semmes Foundation intern Hilary Shroeder, “All This and Heaven Too” gathered over 100 works including rarely exhibited video and installation work, as well as Ramirez’s large-scale photographs. Last year, in preparation for the exhibition, Barilleaux spoke with the Current and explained Ramirez’s unique contribution to contemporary art.

“He comes from a tradition of artists and photographers who have taken a single image and elevated it,” Barilleaux said. “He’s able to take inanimate objects and give them human personalities. The open purses, the piñatas ... he makes them feel alive and human ... What is interesting — and not many people have talked about this — is that there are rarely people in his photographs.” 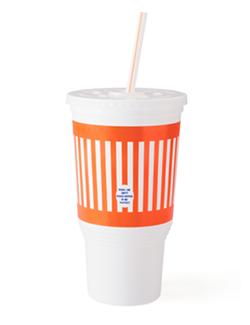 Perhaps no other image exemplifies Ramirez’s artistic practice better than his 2001 large-scale photograph Whatacup, one of the highlights included in the McNay’s survey and captured in Tía Chuck through the Walley’s footage. Presented against a white studio background, Whatacup depicts a single, disposable plastic cup from Whataburger. At the center of the cup, an epitaph reads: “When I am empty, please dispose of me properly.” In the film, artist Alejandro Diaz offers his interpretation of Whatacup:

“That just screams about identity and self-worth and how a person can feel when they are dealing with things such as homosexuality, AIDS, feeling like you’re a disposable individual, and it can make you feel quite empty like the Whataburger cup,” he says. “So that piece, to me, is one of the more profound portraits I’ve ever seen.”

A touching look at the life and work of a creative mastermind, Tía Chuck, brings to light the complexities and contradictions found in Ramirez’s work. Behind the cold hand of a graphic designer, whose work could be described as “clinical,” was a conceptual artist bursting at the seams with sentimentality and who sought to make human connections in the most profound manner. The film reveals a man who loved his friends and family, found beauty in unexpected places, and remained keenly aware of the transient nature of our existence.

“We are used to making films about art and artists and why artists make art, but this film is different,” Angela Walley said. “We wanted the film to be more personal and not just a film about an artist.”