New East Side Watering Hole Defined by Patio and Pavilion

For a somewhat austerely styled concept, Burleson Yard Beer Garden has a lot to unpack. Composed of a sprawling gravel-floored outdoor patio and a white-brick indoor pavilion, Burleson owes a hefty portion of its identity to its East Side location.

The beer garden is self-aware of its limited parking options and as recompense provides ample rows of bike racks to encourage green commuting. As if in response to the gesture, nearly half of the clientele on the Tuesday night I visited were cyclists.

The area also plays host to a frequently used set of train tracks that abut the east end of the patio. The tracks are perpendicular to Burleson Street, not 20 feet from the bar, which, in addition to making parking that much more difficult, also adds to the noise problem that plagues the site.

Two food trucks parked outside the north end of Burleson each add their own distinct soundtracks. The first truck, Professor Frank Furter's, is attached to an electric generator for the time being, which chugged along gamely throughout the night. Within a week or two, bartender Daniel Delgado assured, an electrician is coming to provide a permanent electrical hook-up, which will not only cut the noise of the generator but will allow for a rotating cast of mobile food vendors to set up shop.

Feet away from the German-inspired hot dog truck was La Maceta Tapatios, a bustling taco truck offering everything from mini tacos (6 for $7) to their Mexican Hotdog ($8), an architectural marvel that hoists refried beans, a beef frank, pico de gallo, crema and homemade bacon under an Atlassian bun.

Drink specials of any sort would be welcome, as the recently opened beer garden boasts a full bar but lacks a composed cocktail menu. Delgado again assured that they plan to roll out a menu for mixed drinks within a week, but until then it's either dealer's choice or a selection from the bar's muscular beer list.

Bracketed into "Drafts, Cans and Bottles," the beer menu more than makes up for its unimaginatively named categories with its curation and affordability. Craft beers such as the two I chose, the Ballast Point Sculpin IPA and Founders All Day IPA, run in the $5-$6 neighborhood, while staple domestic offerings lie closer to the $2 mark. Aim to arrive at Burleson between 4 and 7 p.m. Monday through Friday to take advantage of their $5 happy hour margaritas. Their micheladas, as rumor has it, are also making an early case for some of the best in town. 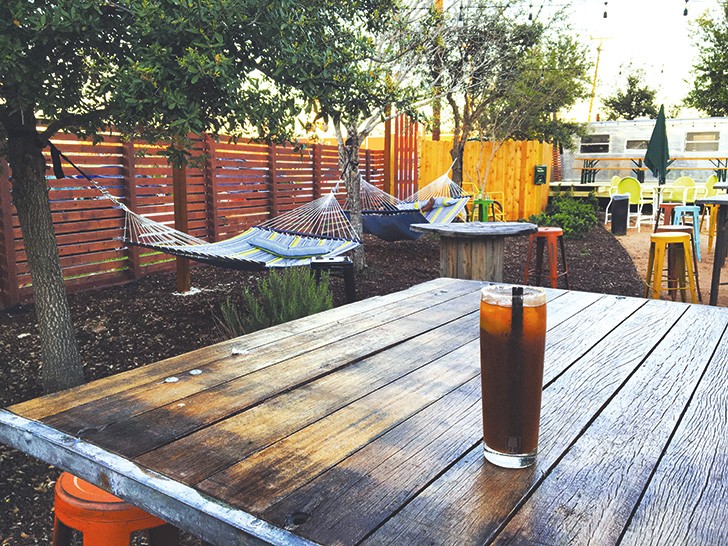 The outdoor patio is the size of an Olympic pool and is split into three areas, each with their own distinct décor. The hive of the beer garden is front and center, waiting to greet you once you walk under the wooden frame — and mind your step — into the central drinking headquarters. Metal chairs and tables of pastel greens, blues, pinks and yellows dot this district, which due to its adjacency to the bar within the pavilion, is packed with people waiting in line and buzzing around tables.

A raised wooden deck holds rows of rugged picnic tables and is saddled next to a currently dormant Spartan trailer. Soon, Burleson plans to use that area to host live music on Fridays and Saturdays, which — though adding another section to the site's symphony — could make the northeast corner of the patio the most popular.

Competing for that future popularity will be an art installation that is currently under construction in the central part of the patio. Lee Beekly, the owner, intends to gut and erect a shipping crate that will play host to rotating artists and their work. Though the project looks to be months, not weeks away, the collaboration of local business and art is always a collaboration worth waiting for.

The final section of the outdoor area is a well-lit child's play place. The inclusion of the play place, as well as the future live music patio and art installation, all speak to Beekly's hope for the bar to be a community bolstering place. With food, alcohol, bike racks, music, art and a children's attraction, the vision seems like an imminent reality.

As time presses on and the heat grows unbearable, Burleson's indoor pavilion will become more integral. The rows of industrial picnic tables, smattering of plush sofas and the stylishly minimal aesthetic of the pavilion offer a seat with a view, and the closest proximity to the bar if that kind of thing is important to you.