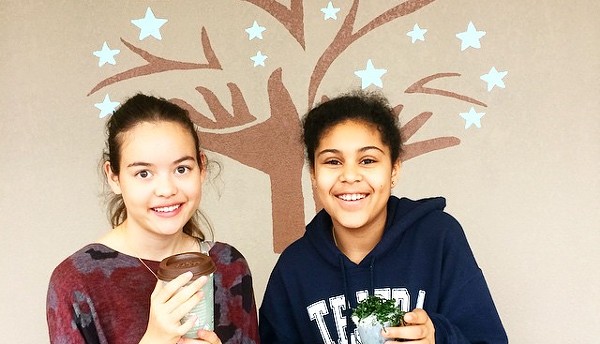 Kiddos have a new place to hang out, and parents have a new place to unwind from said progeny. Utopia Play Cafe, owned by Jocelyn Cunningham, celebrated its grand opening and ribbon cutting earlier this week. The shop, found at 565 Eleanor Ave., initially opened its doors in early January, with a "supervised play area, activities, drop-off childcare, party hosting, WiFi and a cafe." The play cafe is geared for children four months to eight years.

Foodie moms and dads familiar with Tim The Girl catering will be happy to know Tim McDiarmid is behind the menu for the cafe portion of the facility.

"I really spent my time trying to curate a menu that was delicious for parents and fun for kids," McDiarmid said over email to the Current. "I truly believe that kids should not be offered 'kid food,' which typically means junky carb filled processed crap. If you don't offer crap, they will eat real food."

Look forward to salads, finger sandwiches (Cunningham's fave is McDiarmid's curried chicken salad on raisin bread), hummus plates, along with fruit and yogurt plates, which round out the tea party-esque offerings, parents and lil niños can enjoy together or separately.

"I think everyone, when they first have kids, are kind of shocked that you can't take your kid to your favorite hangout, or happy hour or sushi and, well, the kids don't like it either," Cunningham said. "This is for parents who need a break."

For now, hours are 9 a.m. to 2 p.m. Monday and Friday; 9 a.m. to 5 p.m. Tuesday through Thursday; 9:30 a.m. to noon on Saturday. Utopia Play Cafe also offers Parents' Night Out childcare services every other Friday from 5 to 9 p.m.; the play cafe partners with restaurants to offer discounts on said night out dinners (most recently Tuk Tuk Tap Room). Cunningham, a mother herself to a 6-year-old and a 6-month-old, also teased upcoming happy hours, which are still being worked out.